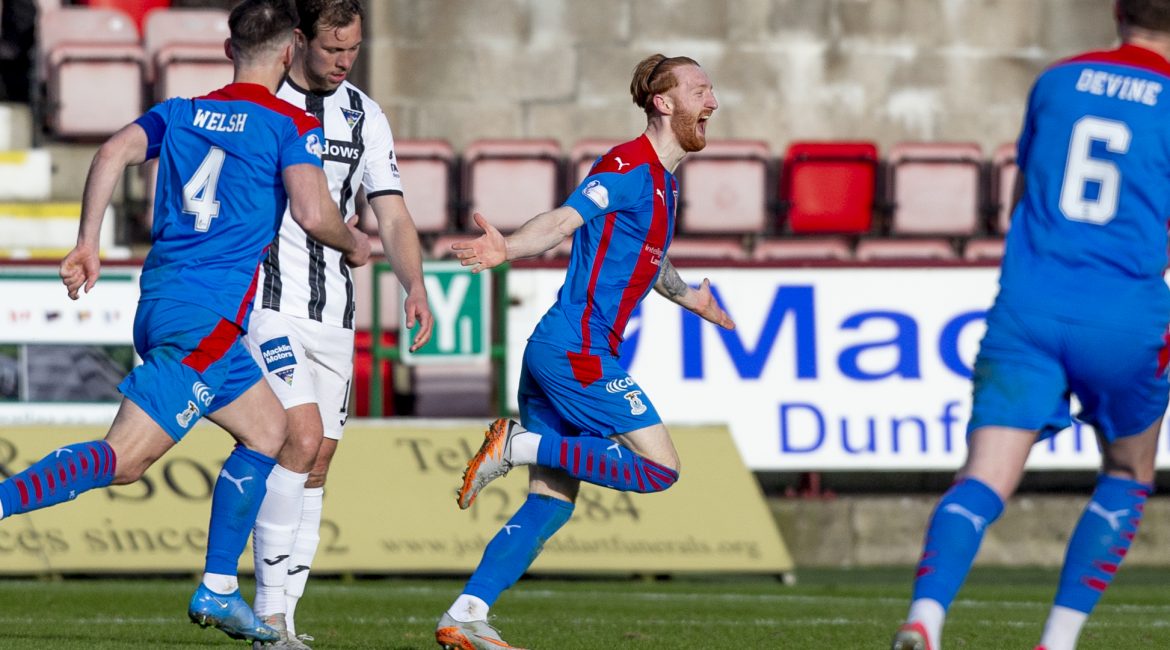 Caley Thistle made it two wins in Fife in a week as they followed up Tuesday’s win over Raith Rovers with a 1-0 win against Dunfermline at East End Park, courtesy of a David Carson second-half strike.

Interim Boss Neil McCann named an unchanged side from Tuesday’s win in Kirkcaldy.

Dunfermline starting the opening period of the game well but the first real chance came after 11 minutes as Ridgers gathered a deflected effort from Fraser Murray.

The Caley Jags grew into the half and on 14 minutes as Shane Sutherland free-kick deflected into the path of Nikolay Todorov and he played the ball back to Daniel MacKay who saw his effort take a nick on route to goal and behind for a corner.

From the resulting corner, the ball fell to Shane Sutherland in the middle but his effort poked towards goal was clear off the line by Murray.

Dunfermline thought they had the lead after 19 minutes as Dom Thomas put Craig Wighton through on goal and he poked the ball past Ridgers but the linesman’s flag was up.

Just after the half-hour mark, Sutherland’s corner found Allardice in the middle of the box but his effort went over the bar.

Just before the break, Daniel MacKay forced a good save from Fon Williams as he unleashed a strike from range which was turned behind.

Caley Thistle started the second-half in impressive fashion and almost had the lead through Daniel MacKay. The winger went on a fantastic solo run through the middle but saw his effort go over the bar.

Nikolay Todorov looked to catch Fon Williams out after 51 minutes on the clock with a dipping volley but fortunately for the Welshman his effort went over and onto the roof of the net.

Caley Thistle then got a big chance after 55 minutes as Roddy MacGregor broke through and saw his effort from a tight angle saved by Fon Williams and then rebound came to Daniel MacKay bit his low header was blocked on its way to goal.

Nikolay Todorov was forced off with an injury on the hour mark and was replaced by Miles Storey.

After 62 minutes, Mark Ridgers was forced into a good save as he parried Steven Whittaker’s low effort from range. Shortly afterwards Dom Thomas saw his effort go over the bar.

Ridgers was called into action four minutes later as he held an effort from Scott Banks.

Caley Thistle had a breakaway after 69 minutes, Miles Storey found Roddy MacGregor but Comrie go back to stop the Caley Thistle man in his tracks.

With 15 minutes left on the clock, Sean Welsh saw his free-kick from about 20 yards parried by Fon Williams behind for a corner.

Caley Thistle then got the lead through David Carson as he got his first goal for the club. Carson met a great ball from Scott Allardice and advanced down the right and cut inside in the box and finished past Fon Williams via the post.

Caley Thistle held to make it two wins from their last two games and to move to 5th place in the Scottish Championship table.