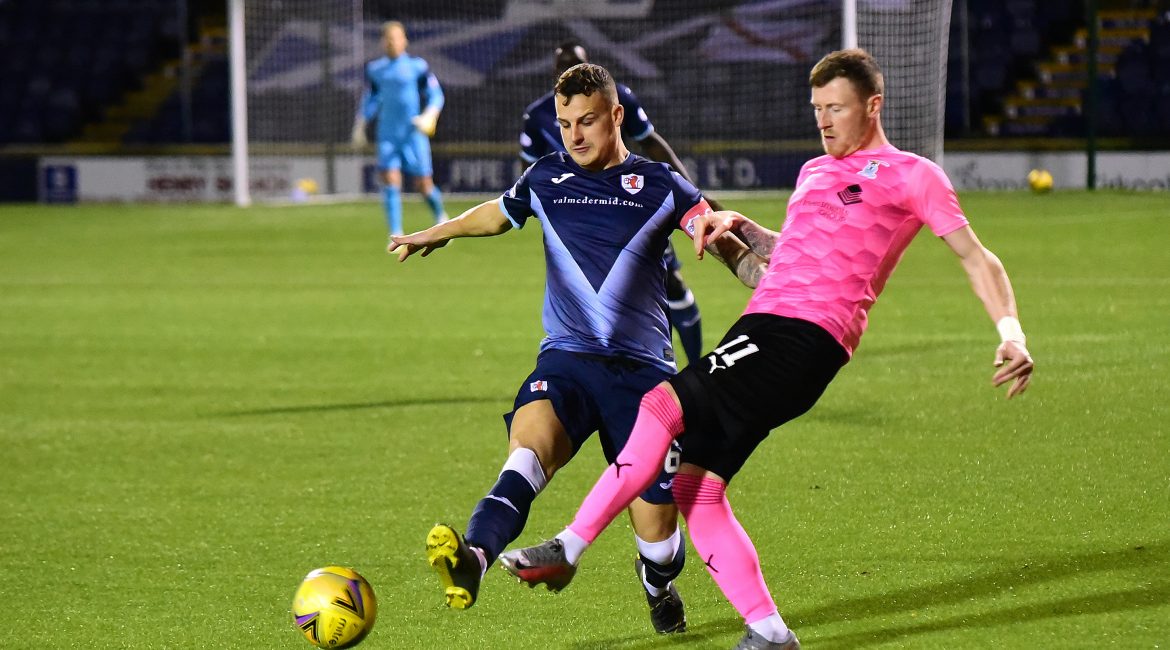 Caley Thistle and Raith Rovers drew 3-3 in a thrilling encounter at Stark’s Park, with the home side picking up the bonus point 3-2 on penalties.

Danny Devine, James Vincent, Aaron Doran, James Keatings and Shane Sutherland came into the side which was narrowly beaten 2-1 by Hearts on Saturday.

Rovers had the lead early on after 10 minutes on the clock, Striker Manny Duku raced through on goal as finished low past Mark Ridgers to open the scoring.

Caley Thistle looked to respond through James Keatings three minutes later but his effort was just over the bar.

Caley Thistle got level after 23 minutes, Kai Kennedy whipped in a fantastic cross for Shane Sutherland in the middle of the box and his header went past Thomson. It was Sutherland’s first goal for the club since his return.

James Vincent went down off the ball and was forced off after 33 minutes, he was replaced by Roddy MacGregor.

Five minutes before the break, James Keatings had the ball in the back of the net but the offside flag was up.

Just before the break, Raith Rovers were awarded a penalty as Wallace Duffy was judged to have fouled Musonda in the box.

Dan Armstrong stepped up and took the penalty but his effort was blazed over the bar.

Caley Thistle were forced into a change just before the break as Brad Mckay, who required treatment earlier in the half, was replaced by Robbie Deas.

Caley Thistle started the second half really quickly as MacGregor forced an early stop from Thomson.

After 57 minutes, a great ball from Scott Allardice pick out Aaron Doran through the middle but his chipped finish was wide of the post.

Just before the hour-mark, Raith Rovers regained the lead. It was good work from Ethan Ross down the right side and his cross took a deflection off Danny Devine and into the back of the net.

Caley Thistle had a strong penalty appeal turned down as Kennedy’s ball looked to hit the arm of Matthews but nothing was given by the referee.

The Caley Jags were awarded a penalty four minutes later as MacGregor was fouled by Tumilty in the box. James Keatings stepped and slotted it penalty past Thomson to make it all square.

Caley Thistle then went on the attack straight away and got the lead. Keatings, fresh from scoring his penalty, saw a free-kick from the edge of the box hit the post and then Roddy MacGregor was on hand for a tap-in. The goal was Roddy’s first competitive goal for the Caley Jags.

Moments later Shane Sutherland had the chance to make it 4-2 as he was played through on goal but his effort was well saved by Thomson.

With four minutes left, Mark Ridgers produced a fine stop to deny Benedictus from close range as the ball broke to the defender at the back-post.

Raith did however get a leveller in the final minute of the game. Hendry’s ball in the box was flicked on by Mendy into the path of Duku who prodded home from close range.

Caley Thistle then searched for a fourth in added time. Allardice picked out Keatings free in the box from the first attack after Raith’s goal but he couldn’t make full contact with the ball.

Caley Thistle looked like they should have had a second penalty late on, James Keatings unleashed a shot from about 25 yards and it hit the arm of Benedictus but nothing was given by the referee.

The game fished 3-3 and went to penalties for the bonus point.

Todorov and Keatings missed Caley Thistle’s first two while Hendry and Matthews converted for the home side.

Scott Allardice converted his penalty while Spencer blasted his effort over the crossbar.

It came down to Kai Kenendy’s effort but his penalty was just wide of the mark so Rovers picked up the bonus point.