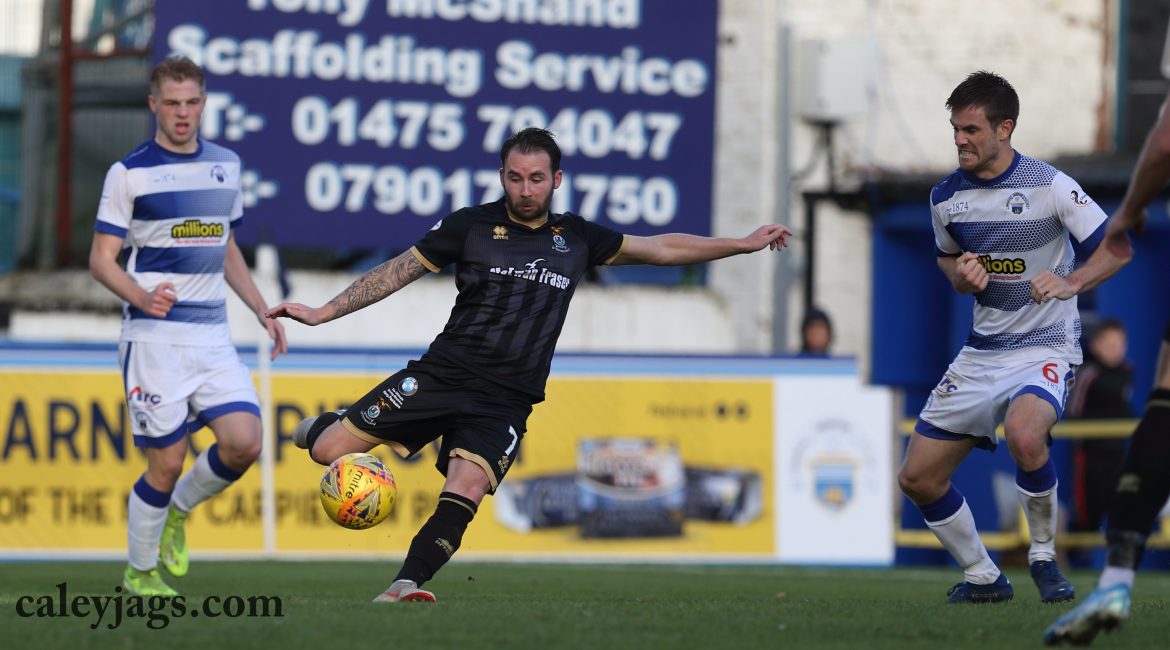 Caley Thistle fell to defeat against Morton at Cappielow as a double from Bob McHugh cancelled out Mitch Cury’s equaliser.

John Robertson made three changes to the side which drew with Alloa last week as David Carson, James Keatings and Mitch Curry came into the side for Aaron Doran, Roddy MacGregor and Charlie Trafford. Curry was making his first league start for the Caley Jags.

It was a bad start to the match for Caley Thistle as The Ton took the lead after 6 minutes on the clock. A long pass from Peter Grant found its way to McHugh in the box and he chipped the ball over Ridgers to open the scoring.

Morton thought they had made it 2-0 just a minute later, Salkeld scuffed shot went in the back of the net but it was disallowed as Reece Lyon fouled James Vincent in the box to stop him from clearing it.

Caley Thistle then were prevented by the woodwork, James Keatings corner was flicked on it the box by Shaun Rooney and into the path of Carl Tremarco but his back-post header came off the post as he looked for his second goal in as many games.

The Caley Jags then had a good chance through James Keatings, Morton failed to deal with a long ball from Donaldson as Miles Storey capitalised on it and feed in Keatings who saw his effort well kept out by Ramsbottom.

Miles Storey then had a good chance to level things after 24 minutes as James Keatings’ free-kick was deflected into his path on the edge of the box but his effort was over the bar.

Caley Thistle did get level shortly after through Mitch Curry on the 28th minute. Curry met a flick on from James Keatings and fired past Ramsbottom with a superb finish as he marked his first league start with his second goal of the season.

Caley Thistle then had a chance to go ahead before the break, Shaun Rooney’s cross was met by Jordan White in the middle but his header was over the bar.

The Second-half started in quick fashion for the Caley Jags but James Keatings saw his effort go over the bar.

After 58 minutes, Shaun Rooney saw his effort from the right hand side saved by Ramsbottom.

Mitch Curry caused so serious danger down the right hand side as his low and powerful delivery into the box was a good one but it was just missed by Miles Storey in the box.

Stephen Welsh was forced off with an injury for the Ton and was replaced from Chris Millar while Caley Thistle made a double change with 20 minutes remaining as Tom Walsh and Nikolay Todorov, both returning from injury, replaced Jordan White and Mitch Curry.

Miles Storey had an effort from range with just over 10 minutes on the clock, but his effort bounced wide of the post.

Morton got themselves ahead on the 81st minute, Bob McHugh grabbed his second of the game as he raced through on goal after capitalising in a mistake by Donaldson in the back-line.

The Ton held on to take all three points and maintain their unbeaten record at home, the Caley Jags now travel to Palmerston to face Queen of the South on Tuesday as they look to bounce back.