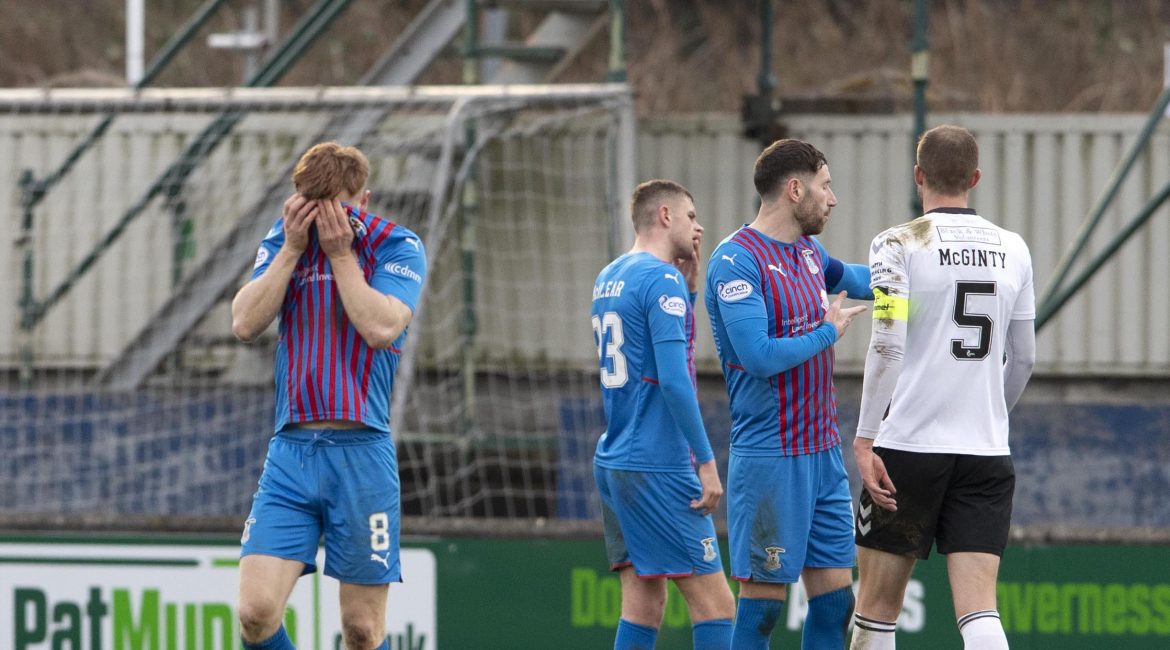 Ten man Caley Thistle fell to a 2-1 defeat at the Caledonian Stadium against Ayr United. Goals in both halves from Sean McGinty and Tomi Adeloye secured all three points for the visitors as David Carson saw red for two yellow cards.

17-year-old academy graduate Lewis Nicolson got his first goal for the club late into the second-half.

Head Coach Billy Dodds made three changes for the side which drew 3-3 with Partick Thistle in our last match ten days ago with Cameron Mackay, Cameron Harper and Logan Chalmers coming into the Starting XI.

Ayr United took the lead after 35 minutes on the clock. Sean McGinty headed past Cammy Mackay as the Ayr United centre-back met Kerr McInroy’s corner in the box.

Caley Thistle responded well, Logan Chalmers produced some great play down the left side and his cross found Reece McAlear on the edge of the box but his effort was deflected wide.

The resulting corner was whipped into the box by McAlear was headed on by Kirk Broadfoot and his header found Robbie Deas but the defender saw his overhead kick effort go well over the bar.

Ayr United keeper Aidan McAdams produced a great double save to keep them level after 41 minutes. McAdams initially did well to keep out Loan Chalmers’ low drive after the Dundee United loanee met Shane Sutherland’s ball on the edge of the box.

The rebound then came to Sutherland in the box and his effort was pushed behind with Billy Mckay inches away from connecting with it.

Sam Pearson had the first chance of the second-half after 53 minutes, he did well down the right side but his cut back into the box was turned behind by Aidan McAdams before it could reach Billy Mckay in the box.

Ayr United doubled their advantage after 63 minutes, substitute Tomi Adeloye was only on the pitch a matter of the seconds before putting the ball into the back of the net.

McInroy’s free-kick was deflected into the path of McKenzie and his drilled cross into the box was put in by Tomi Adeloye from close range.

Caley Thistle were then reduced to ten men. After being booked in the first-half, David Carson was shown a second yellow card for a late challenge on Tomi Adeloye.

Caley Thistle got one back late on through 17-year-old left-back Lewis Nicolson. His cross turned shot flew into the top corner for the Academy Graduate to get his first Caley Thistle goal.