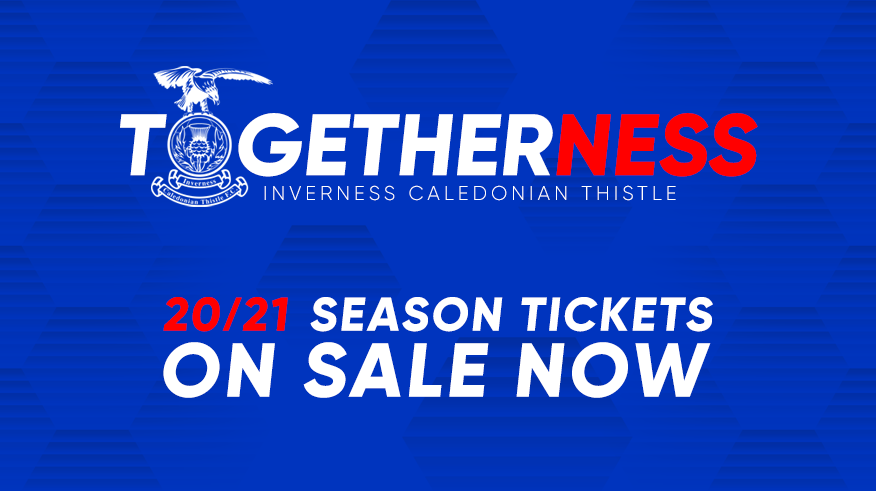 With Season 2020/21 Tickets now having been on sale in the Ticket Office for the past week, we have been overwhelmed by the response from the Caley Jags fans.  As things stand we have now sold just a few short of 50% of last season’s entire season ticket total in the first week of sale! This is way beyond what we dared to hope for and we are so appreciative of the support folks, it really makes a difference to the club.

This week we’ve had the opportunity to speak to supporters as they’ve come into the Caledonian Stadium after months of lockdown to renew their tickets, and some of the discussions have been absolutely humbling and inspirational.

A gentleman came in to buy a Season Ticket, his first one for 10 years.  He’s been living and working in Aberdeenshire, so getting to games was challenging, but him and a few of his pals had decided that they wanted to support the club, so they are all getting Season Tickets for 2020-21.  He also bought a season ticket for his Dad – his first one ever at the age of sixty nine! Fantastic.

He was followed by another gentleman who renewed for the new campaign, he then left the Stadium only to come back in a few minutes later to purchase a further three Season Tickets, which he promptly donated back to the Club for us to use in conjunction with a local charity. We are going to double that purchase up and make the 6 tickets available on his behalf. He didn’t want his name known, just wanted to make a contribution and we thank him for this incredibly generous contribution.

On Friday alone, we received two fantastic donations of £1,000 from fans old and new which was just amazing.  Whilst these are headline stories on their own, hundreds of fans have made contributions over and above the cost of their Season Ticket, whether it be rounding up to the nearest fifty or one hundred pounds, or paying the equivalent of last year’s full price ticket instead of the listed price.  Remarkably, in our first week of sales, our Season Ticket holders have made donations amounting to almost £10,000. When added to the previous kind donations which were made prior to the ST’s going on sale, we are sitting at close to £25,000 in donations and I am running out of superlatives for those who have made the last few weeks so heartwarming when it could have been so different.

All of this follows on from the previous week when the Caley Jags fans (and one very kind Dundee fan!) bought over 70 bottles of the strictly Limited Edition ICT25 single malt whisky and sold out the entire run of 25 ICT25 Oor “Caley” Wullies in 12 hours. A simply tremendous effort. There are now less than 50 bottles of our ICT25 Whisky left and at this rate they won’t be there for very long. We also plan to reveal our new PUMA away kit in the next week, all things going to plan. We hope you love it as much as our home kit which actually managed to crash our website when it went on pre-sale, such were the volume of sales for its launch, proving sometimes a bad thing can be a good thing, so to speak.

All of your support is remarkable. We will continue to try and do our best for you with the club and the team we are incredibly proud to represent our club, our community, and our city. #TogetherNess