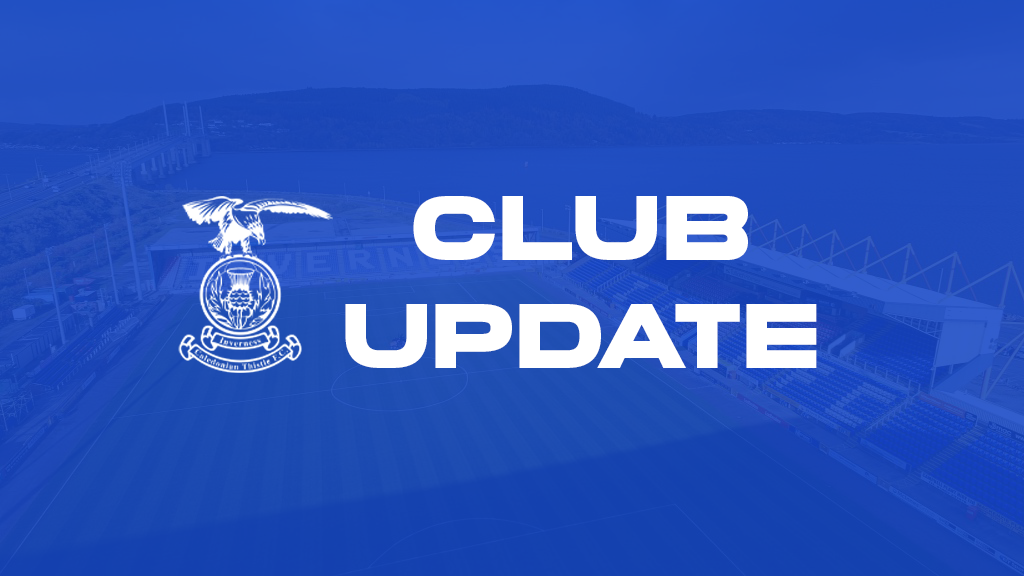 It is now a couple of days since a fateful and ultimately disappointing night in Perth and it is fair to say that everyone at ICT is still feeling very raw after the most phenomenal effort by Billy Dodds, the players and staff this season but especially over the last few weeks in particular.

We came up just short this time but the night was illustrative of a special bond between the fans and the club which has been enhanced throughout this roller coaster of a season.  We believe the incredible support shown on Monday which saw over 2000 Caley Jags travel down the A9 and over 10,000 back us across the 6 gruelling but thrilling play-off games, gives our players, coaches and staff huge encouragement for the future.  All 6 play-off games have included incredible moments that won’t be forgotten easily but we must use them to push us on next season.

The team have been through adversity both on and off the pitch this season, at one stage in the 2nd leg semi-final we were actually down to 8 men, only to fight back against all odds and win on pens.  We suffered 2 serious injuries in the play-offs and still came through all of it to be within 45 minutes of going back to the Premier League.

During the season Head coach Billy Dodds was under incredible pressure during a run which saw us not win a match in 3 months, following some horrible circumstances that quite honestly, no decent person should have to deal with and he then lost the in-form and influential Scott Allardice to a serious injury. Throughout this period he never doubted his ability or the ability of the squad to turn things around and he deserves tremendous credit for that.

We were sorry to see Manny Duku, Lewis Jamieson and Anthony McDonald leave us in the January transfer window as all played their part in the first half of the season. Loan wise, young Sam Pearson also contributed to the team before having to leave us early due to sad circumstances back home in Wales.

Reece McAlear and Logan Chalmers lit up our campaign with some spectacular goals and performances and in the case of Logan, he now returns to his club and Reece will move on from Norwich City, both leave with our warmest wishes and grateful thanks for their presence and professionalism.  The fans will remember them and their goals for a long time. It is fair to say that we would like to see both players remain in Inverness but for the moment, at least, that is out of our hands.

The club can also confirm Joe Hardy will return to his parent club. We’d like to thank Joe for his efforts while at the club.

We are happy to be able to announce that Danny Devine, Cammy Mackay, and Lewis Hyde have signed new deals with the club and that new deals are in the process of being offered to skipper Sean Welsh, Aaron Doran and to Wallace Duffy.

Shane Sutherland sadly suffered a serious knee injury during the Arbroath semi-final and even though he will be out for a number of months, we will be offering Shane a new contract and making sure he is very well looked after.

Tom Walsh, who went through a big knee operation on Wednesday, will also be fully supported so that we can make sure both boys come back stronger and ready to boost the squad sometime next season.  Roddy MacGregor who suffered a broken jaw in the last regular game of the season, will also be rehabbed with the utmost care.

We can also confirm that we have either offered contracts or are currently in negotiation with several new players.

Physio Dougal Sim leaves us to enjoy a very happy and well-deserved retirement with his family and we will be making an exciting announcement re the Medical Dept in the next few days.

The spirit within the Caley Jags dressing room has been incredible this season. As a group and as a club the goal of promotion remained firmly in focus no matter the distractions or challenges and the circumstances of this season should drive us onwards and upwards.

Off the field and following two extremely challenging pandemic years, our season tickets numbers were up on the last two seasons, our commercial numbers were similarly up, and our Puma kit continues to be extremely popular and commercially successful, and we hope our supporters continue to support our retail offering in the same numbers as the last two seasons.  We had two difficult cup experiences with extremely disappointing results in both National trophies and they certainly had a negative impact on our financial position but the strong finish from the team helped that situation. We will announce the date of our AGM next week.

Our season tickets for next season will go on sale next Tuesday and we hope we can at least match this season’s tremendous effort.  Section 94 has brought a new life to the West Stand and to our away matches and we hope to work with the guys to continue to enhance the atmosphere both home and away.

Bringing Andrea Bocelli, the world’s most beloved tenor, to Caledonian Stadium on 1st July is a real coup for the club and the city and to follow that with Duran Duran, one of the most successful bands the world has ever seen the following night should mean one of the most amazing weekends seen at the Stadium. Tickets are still available at all levels and we don’t think you will want to miss either night.

The first phase of our already successful partnership with Intelligent Land Investments Group is close to coming to fruition and this will give us a financial platform unlike any we have had before and we hope to be able to announce a second phase of this genuine partnership soon. We cannot emphasise enough how good our relationship is with ILI Group, a company we have become warm friends with.

Our planned and hoped for ICT Community Trust Project at the Royal Academy sports fields could be one of the most innovative and productive community schemes in Scotland, let alone the Highlands, and the cross-party political support as we edge closer to an agreement with Highland Council has been extremely encouraging for all of us involved in delivering the hub. The addition of over 150 girls from P1 to U16’s to ICTWFC in the last few months has been inspiring and if we are successful with our plans, they will surely benefit from being a major anchor presence at the hub, as will our burgeoning ICT Community Trust projects and of course our highly thought of Academy.

On the subject of the ICT Academy, we continue to punch way above our weight with the quality of players, style of football, and the standard of our coaching. Wherever I go there are nothing but compliments in relation to all three and it is our intention to continue to support and bolster the Academy structure at ICT.

The Chairman and the Board of Directors have been incredibly supportive and creative in and around the club throughout what has been an extremely challenging time and environment due to the pandemic. Especially with all the financial pressures it brought.

We are now formally looking to inject new blood and even more business acumen onto the Board and as these are exciting times for the club we feel there will never be a better time for someone to come onto the Board to help us to take the club to a higher level and accordingly we are actively seeking to appoint at least two new Directors to the club Board. Anyone who is interested should contact me directly at the club.

Speaking on behalf of the Chairman and the Board, as sore as the last few days have been in relation to the last 45 minutes in Perth, we are all extremely proud of the team and our supporters’ efforts.  We know that exciting times are ahead for us and we hope as many of you will join us on the journey. It isn’t always easy being a Caley Jag but goodness knows it’s never dull and for a club that has achieved so much in such a relatively short time, it still feels like we have so much more ahead of us.

Thank You for all your support. We all really appreciate it.