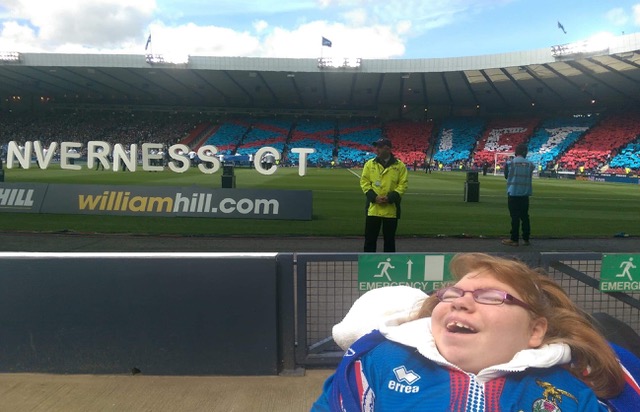 ICT has lost a great friend and supporter with the sad passing of Dawn Sinclair, who would have celebrated her 16thbirthday on Saturday 19 January with a party at the stadium following the Scottish Cup tie against East Kilbride.

A period of applause in the 16th minute on Saturday will be a fitting tribute to the teenager, who was a familiar face at games and at events run by Supporters, the most recent being a night out at Rollerbowl.

She loved wearing her ICT strip and her proudest moment was being at Hampden in May 2015 to see the club lift the Scottish Cup.

Many of those who attended the celebration of her life on Tuesday 8 January  – ICT fans and supporters of other clubs  – wore ICT colours in recognition of Dawn’s love for ICT.

Her hero was club goalkeeping coach Ryan Esson, whom she sponsored, and Ryan was amongst those who attended the service.

At her funeral, tributes to Dawn’s life were paid by her sister Joanne and also nurses Pam Murray and Laura Steven, the Children’s Ward at Raigmore, where Dawn received care over her lifetime.  Dawn also attended Drummond School, Inverness and many of the school’s staff and friends attended the service.

Dawn of Holm Park, Inverness, was the daughter of Mrs Doreen Sinclair and the late John Sinclair, sister to Elizabeth and Joanne, auntie to Abigail and Callum and sister in law to Brian Simpson.  She passed away on Boxing Day.

Many members of her family will be present at Saturday’s game.