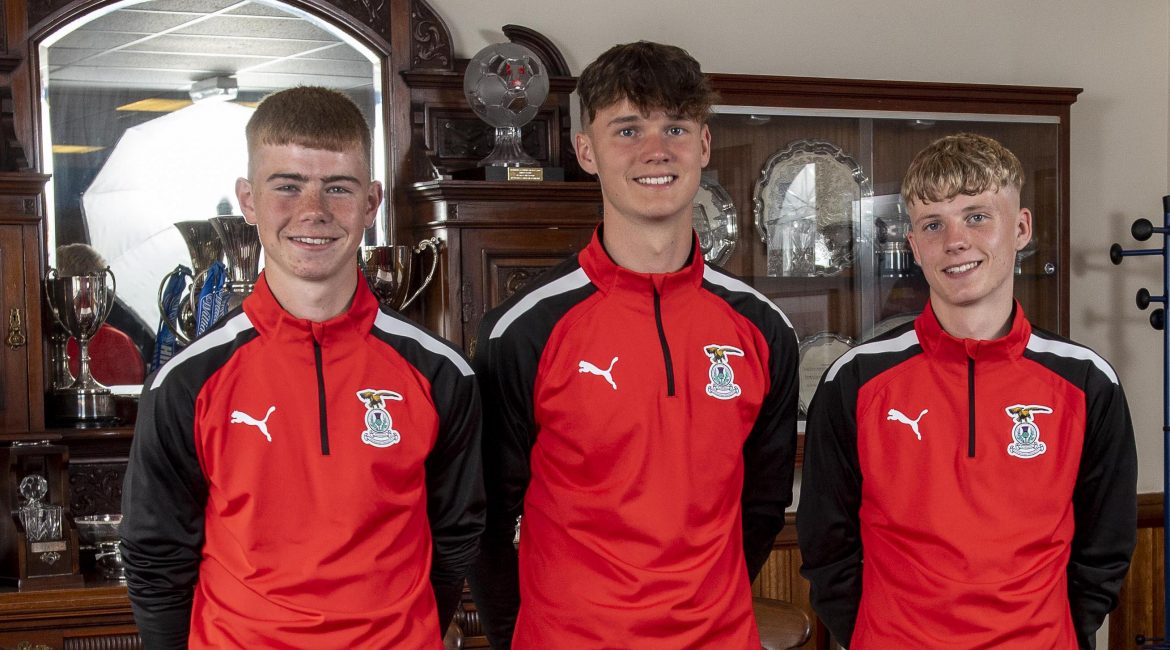 Inverness Caledonian Thistle FC are delighted to announce the signing of three of our most promising Academy graduates on 2 year, full-time Apprenticeship contracts and we warmly welcome them into the club as they take their first steps in to full time football.

Keith is a central midfield player who combines both skill and steel in the centre of the pitch and he has regularly been promoted from the U16s to the U18s last season due to his mature performances. He is a year younger than the other players but his quality has been rewarded with a full time deal. Keith is from the small village of Aird in Tong on the Isle of Lewis and attended the Nicolson Institute on the island. He was originally scouted by ICT as a goalkeeper before it became clear that his best position was outfield and in the middle of the park and he played for 10 years for Stornaway Athletic as well as committing to the ICTFC Academy

Matthew is a versatile defender who is equally at home at Left Centre Back or Left Back and joined the Academy aged 9 years old. He has impressed all the way through the age groups, with his commitment and attitude aligned with his defensive abilities and this was recognised with his selection for the Scottish Schoolboys and he played on all 4 occasions against Wales, Northern Ireland, England and the Republic of Ireland. Matthew was a mainstay of the ICT team which reached the semi-final of the Scottish Youth Cup v Hearts at Tynecastle.

Calum is a naturally gifted two footed central midfielder whose intelligence matched with his vision and tactical awareness has seen him be a natural first choice pick in all the Academy teams and is widely thought to be one of the most talented players to come through our youth system and has been outstanding in whatever position his coaches have asked him to play but its clear that his passing attributes and strong determination will see him play in the middle of the park going forward in his career. Whilst he is the younger brother of our very own Daniel Mackay, there is no doubt in our minds that this young Mackay will soon be making headlines of his own.

Academy Director Charlie Christie was keen to both congratulate the players and point out that the hard work starts now he commented “Many talented players have been given the opportunity to go full time and there is no doubt that for these three players the hard work starts now. Matthew, Keith and Calum are here because they have combined their natural ability with a tremendous attitude and I personally would love nothing more than to see all three play in the ICT first team in the coming years. I would also like to congratulate their parents for all their commitment over the years and they should be rightly proud of themselves and their boys”

Head Coach Billy Dodds also warmly welcomed the players and said “ We have no doubt about their attitude or their ability and they will be given every opportunity to develop and flourish. The club has a great track record in giving local boys an opportunity and there is no reason why Matthew, Keith and Calum cannot follow in the footsteps of previous Academy players and make it all the way to the first team and I am really looking forward to working with them.”

We will feature more in depth interviews with all three young men in the coming weeks.