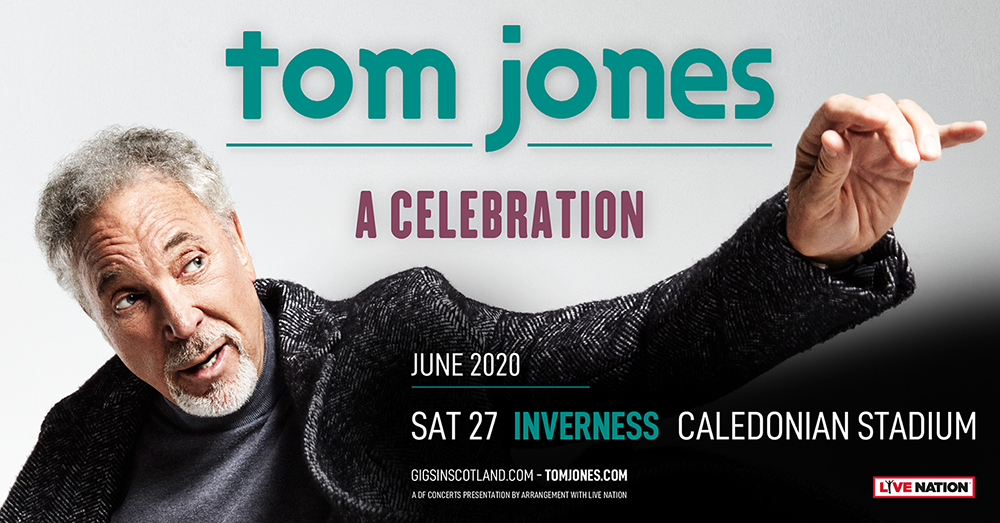 TICKETS ON SALE FRIDAY 31ST JANUARY AT 9AM

With a career spanning five decades, legendary Sir Tom Jones has announced he will play two outdoor shows in Scotland this summer. Having last played Inverness in 2014, Tom is set to make his return to the Highlands on Saturday 27th June playing Inverness Caledonian Stadium, followed by a stop off in Scotland’s Capital on Saturday 8th August to headline Edinburgh Summer Sessions at Princes Street Gardens, three years after opening the inaugural festival in 2018.

One of the most influential showmen in music, the singers’ appearance at the 2018 festival went down a storm as Tom opened proceedings fully clad in a tartan jacket. This year, as he celebrates a landmark 80th birthday, fans in Inverness and Edinburgh should expect timeless classics like ‘It’s Not Unusual’ and ‘Sex Bomb’ plus non-stop entertainment from one of the UK’s biggest superstars on what is set to be a run of unforgettable shows.

Tom is indeed a living legend, one of the few musical artists whose profession began at the dawn of modern popular music who continues to have a vital recording and performing career to this day. His irresistible show traverses’ musical eras and genres, cuts across class divides and appeals to young and old, male and female, mainstream and cutting edge. Tom has always been about the power of the song, the power of the voice.

Tickets for both the Inverness and Edinburgh shows go on sale at 9am on Friday 31st January from www.gigsinscotland.com/artist/tom-jones.