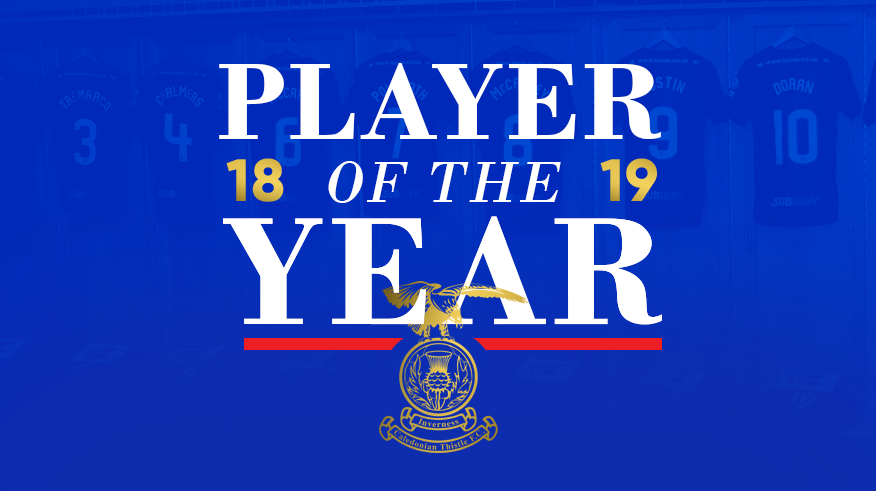 Voting is now open for the 2018/19 Inverness Caledonian Thistle Player and Young player of the year awards!

Supporters will also be able to cast their vote in person at this Saturday’s match against Dundee United by paper if they wish. The awards will be presented after the match against Dunfermline on May 4th 2019.

This is first year Supporters will be able to vote online for their Player of the Year, fans will also be able to cast their vote in person at this Saturday’s match against Dundee United by paper if they wish.

The awards will be presented after the match against Dunfermline on May 4th 2019.

Online voting closes at 8pm on Thursday 2nd May

Player of the Year

Aaron Doran has enjoyed his best goalscoring season to date with him hitting 11 goals so far. The Irishman recently won the Championship Player of the Month for March. Doran has got massive goals against Dundee United, Ross County, Partick Thistle and Queen of the South this season

Welsh recently had his season cut short with injury but he had cemented his place in the side beforehand. A hugely influential player on the side in central midfield.

Joe Chalmers arrived at Caley Thistle in 2017 as a left-back and has become a mainstay in midfield. Joe has also proved his versatility this season playing as a wide man and at left-back. A real consistent performer.

Mark Ridgers has been a massive presence in the sticks for the Caley Jags. He’s kept an impressive 14 clean sheets this season, and no Caley Jags fan will forget his penalty save against Ross County earlier this season.

Coll is a real fans favourite and has enjoyed a fantastic season at centre-back. He’s made over 35 appearances and a real key member of the back four.

Young Player of the Year (22 or Under)

Shaun Rooney joined this summer from Queen of the South, and has enjoyed a good first season at the Caley Jags. He’s played over 35 games this season and has found a goalscoring touch with five goals, including one against Ross County.

Joining last summer from Alloa, Jamie McCart battled his way into the side and hasn’t looked back since then. Jamie is a very consistent performer and has made over 30 appearances this season at centre-back and has been used at left-back also.

Joining in the summer from Dumbarton, Tom Walsh has enjoyed a fine debut season for the Caley Jags. Walsh has hit 10 goals this season, including a thunderous strike against Partick Thistle.

Roddy MacGregor has enjoyed a fantastic season for the U18s, with him hitting 13 goals in the U18s league this term. The 17 year-old made his debut earlier this season against Queen of the South and has gone on to make 7 first team appearances this season.

Cameron Harper has also enjoyed an impressive season for the Caley Jags U18s. The left-back has been key in the Under 18s being so far clear at the top of the league, he made a short cameo against Edinburgh City earlier in the season.