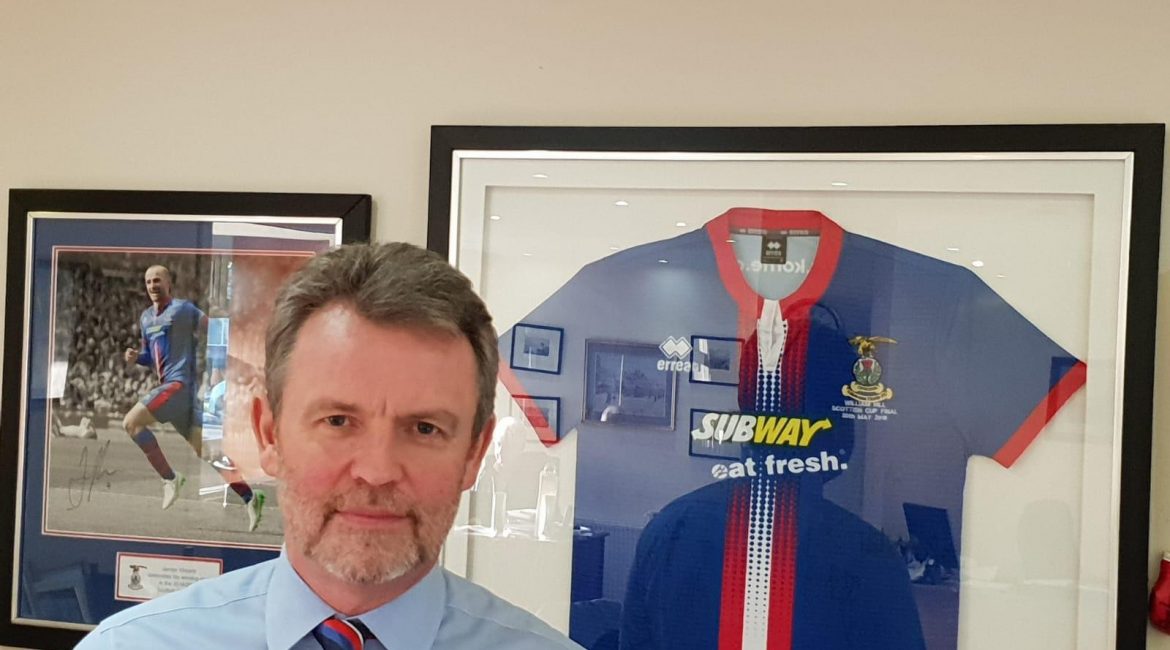 The new Vice-Chairman of Inverness Caledonian Thistle FC is urging fans and the local community to rally round the club by supporting new initiatives aimed at securing a bright long-term future for the club which can bring knock-on benefits for the city.

Director, Ross Morrison, has strong roots in the Highlands having previously lived in Inverness and Wick, is a lifelong supporter of Inverness Thistle then Inverness Caledonian Thistle, dating back to 1974. Now a successful property developer throughout Scotland, Mr Morrison believes exciting times can be ahead for the club as it celebrates its 25thanniversary.

Mr Morrison recognises the challenges facing the club after losing their Premiership status two seasons ago but believes the recent winning back of the lease for the stadium and stands will provide ICT with a surer financial foundation from which to kick on from.

Mr Morrison who joined the ICT Board six months ago, said: “I am absolutely delighted to have been offered the Vice-Chairmanship of Inverness Caledonian Thistle. It’s the club I supported since I was a wee boy, being a card carrying member of Inverness Thistle Boys` Club.  Since joining the Board I have been working with my fellow Directors looking at every avenue and option available at restructuring the Club.  We can’t’ do It by ourselves – we need help from everyone out there. ICT have been a part of me and I’m going to do everything I can to help the club I love.

“It`s no big secret that the Club has been losing money for the majority of the years it has been in existence. Life outwith the Premiership has made it even tougher as we have faced significantly reduced opportunities for generating income.

“However, we are rebranding the club and working hard to reach out to our supporters, shareholders, the community and local businesses, who share our vision for the future. To achieve our goals, we need our fans to really get behind John Robertson and the team by coming to games and helping out in whatever way they can.”

Mr Morrison believes the recent land deal is a game changer, giving a platform from which to build, freeing the Club of a historic rent debt and providing a real asset from having the lease of the Stadium and Stands back in the club’s control. One proposal is to sell the naming rights to the stadium which would provide an important income generator in helping run the Club and strengthen the team for the future.

Mr Morrison added: “We are in the process of forming a new Community Foundation and launching a Crowdfunding Campaign while continuing to give priority to developing young local football talent, via our Youth Academy. We take pride in the commitment we’ve made to our youth and community programmes, despite the substantially reduced income generated. We must try and keep these programmes going forward for the club – playing great football, nurturing our own young talent and serving the people of Inverness and surrounding areas, but we do need help to allow this to continue.

“We have a loyal core support and I would love to hear from any supporter who wants to help – in any way, shape or form. There is always room for more local volunteers to get involved, and with the backing, help and commitment of our supporters, we can all work together to deliver a bright future for Inverness Caledonian Thistle Football Club and make the club great again.”

Welcoming Mr Morrison to the role of Vice-Chair, Club Chairman Graham Rae said:  “I am delighted to have such a fervent supporter of the club as my new Vice-Chairman. He has made a really telling contribution since joining the Board and his expertise in commercial management and property development will be great assets for the Board as we create a business that is more sustainable and community-focused.”

Ross is one of five directors, the others being Graham Rae (chairman), Alan McPhee, Gordon Fyfe and Liam Dalgarno. He takes over as Vice-Chairman from Allan Mackenzie, who stood down recently.