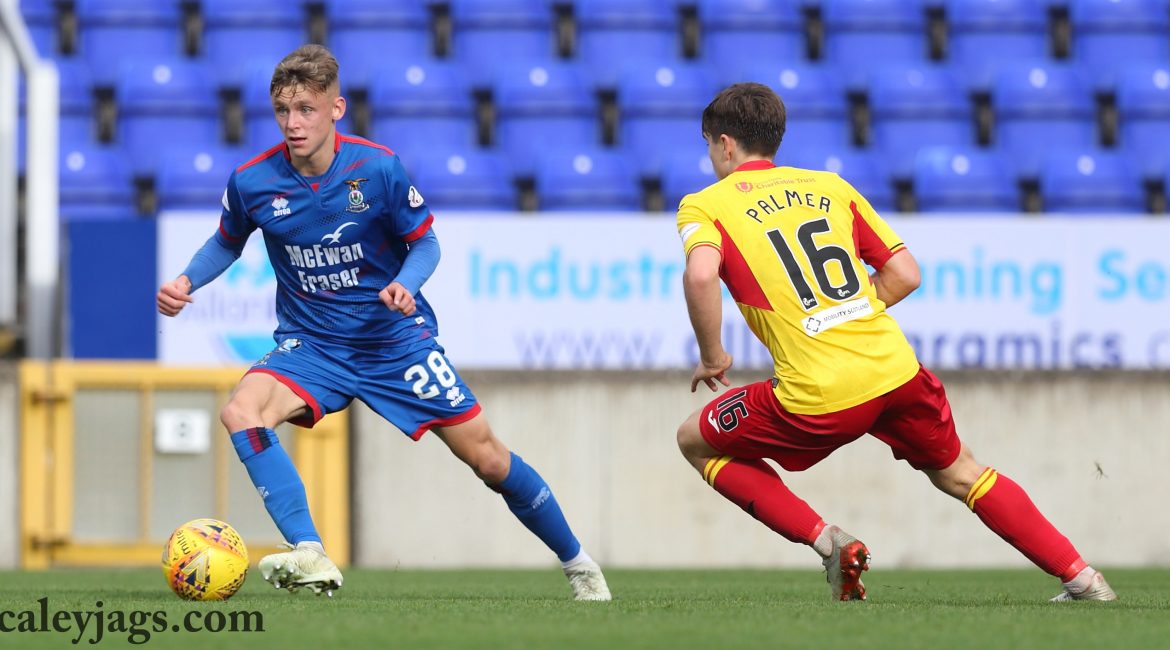 ICT’s unbeaten home record was ended against Patrick Thistle on Saturday, with Jordan White the only response to three goals from the visitors.

It finished 1-3 to the Jaggies in their first league game under their returning manager, Ian McCall.

The Caley Jags entered the game under a bright spell of form, having wracked up five wins and a draw in six games in all competitions. John Robertson made one change to the side from last week’s 2-0 win over Queen of the South, with Roddy MacGregor coming in, for his first start in the Championship, in place of Tom Walsh who missed out through injury. Mark Ridgers was making his 100th appearance for the Caley Jags.

With that in mind, it was no surprise to see the home team starting brightly with the ball, with Doran and Storey exchanging well in the early stages.

From a high ball, Aaron Doran flicked a pass to Miles Storey on the left, who cut in and returned it to the Irishman in space in the middle. Doran took it first time with his left foot but didn’t get enough over the ball and swept it over from inside the box.

Miles Storey was next in line very shortly after that attempt, making some space on the ball from the left to take aim and curled a low effort on goal, but not with enough power to beat Scott Fox.

The visitors were keen to start with a clean slate under McCall, and through their first real test of Mark Ridgers, they opened the scoring.

Stuart Bannigan beat his man with the ball 40 yards from goal and passed it wide to Dario Zanatta, who found a pocket between Shaun Rooney and Coll Donaldson.

The winger was allowed to cut inside and from just outside the box he lined up his effort with his right foot and drove it low into the near bottom corner.

The Jaggies were making it difficult to break them down, almost playing a back five at times with Tom O’Ware sticking close to the backline in the middle of the park and the wide midfielders tracking back to support.

With some distance from goal, Storey fancied a go with a speculative left footed effort around the 15th minute mark. In fairness, the shot was well directed but it didn’t dip back down below the cross-bar to test Fox.

Roddy MacGregor’s youthful energy was abundant on his league debut and it was he who created the equaliser five minutes later. The teenager drifted wide to the right wing to bend a tantilising ball into the box for Jordan White to stoop to header home – his second of the Championship campaign.

Roddy had the last opportunity of the half to get a goal ahead. Aaron Doran cushioned a ball to Macgregor in the box but his half-volley went over the bar.

Barely into the second half, Kenny Miller took advantage of an unfortunate touch to put the away team back in front. The veteran striker knicked the ball away from Jamie McCart and after giving Ridgers the eyes, slotted the ball away from the keeper into the bottom right corner from around 12 yards.

Miles Storey’s speed and ability on the ball created an excellent opportunity for Jordan to grab a brace at the 57th minute to go level again. The Englishman beat his man with a smart change of pace and cut a cross back to White in the middle, who hooked a volley towards the right hand post. Instead of seeing the ball in the net once more, this time he watched it curl just wide of the post.

Partick Thistle almost repeated their second goal at the 65th minute, when Kenny Miller swept a pass around the Caley defence to Zanatta bearing down on goal from the left.

Ridgers clocked what they were doing this time and aggressively rushed off his line to close down the gap; it was enough to put Zanatta in doubt and he couldn’t take advantage with Ridgers making himself big to block the effort.

A sniff at a Caley Thistle comeback near the end of the game was snuffed out by the newly minted sub, James Penrice. He crossed from the left hand side and it was met by Cammy Palmer from 10 yards, finishing home.

Matheus Machado made his league debut late on, as he replaced Miles Storey in the 87th minute.