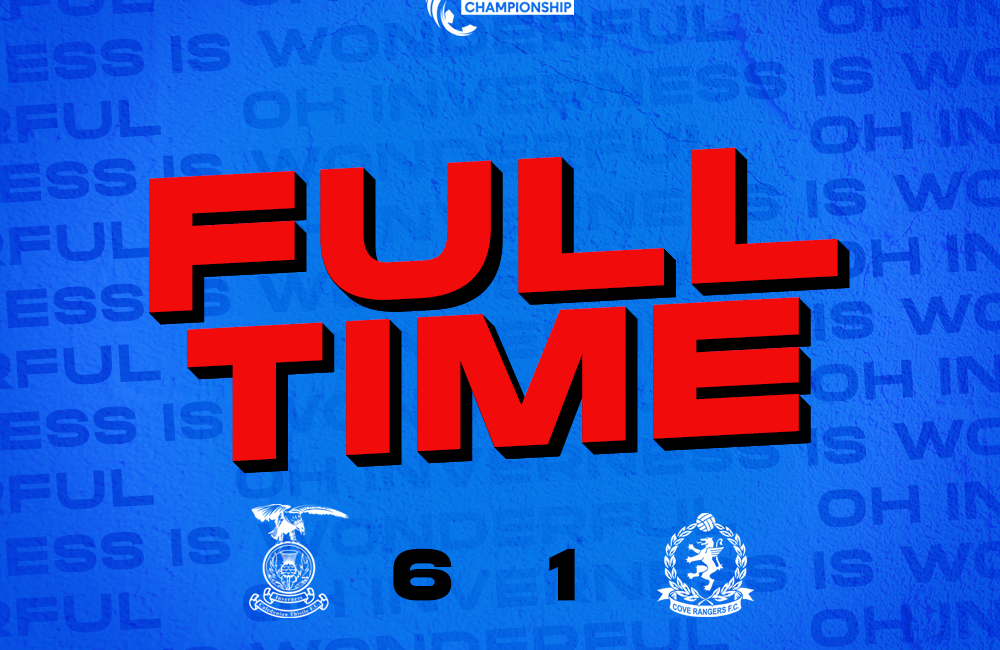 Inverness Caley Thistle ended a run of three defeats on the bounce with a huge 6-1 win at home to Cove Rangers in the Scottish Championship. It was an excellent and hard-fought win from Billy Dodds’ men as they look now to take this performance into the next game against Arbroath and hope this win will be the start of a great run at the start of 2023.

Billy Dodds made four changes to the starting XI that faced Partick Thistle in the previous 5-1 defeat. Goalkeeper Mark Ridgers made his first league start since October 28th, and replaced Cameron Mackay in net. Danny Devine stepped in for Wallace Duffy, who was sent off in Friday’s game against Partick Thistle. New loan signing Jay Henderson went straight into the starting XI, as Steven Boyd made way while Aaron Doran came back in to partner Billy Mckay up front.

Before kick-off, there was a minute’s applause for the late, great Pele. The Brazilian legend who touched the hearts of a football fans around the world.

Inverness were under pressure coming into the game but started excellently, as talisman Billy McKay took the ball on his chest to volley the ball goalward from outside the box, striking the far post within the very first minute of the match.

Cove however, also had chances as Zak Delaney’s last-ditch tackle on Mitchel Meggison resulted in a corner for the away side. The corner was taken well by Fyvie but was just headed over the bar. Minutes later, Longstaff would play a ball from the right-hand side into Leighton McIntosh who couldn’t get his finish right.

Both sides continued to apply pressure and provided a great start to the match, until finally the deadlock was broken on 22 minutes. Fraser Fyvie with a good ball in from the corner on the left side, was met by Jack Sanders, whose header was deflected into the roof of the net. Mark Ridgers felt as if there was a foul leading to the goal and was left furious.

Caley Thistle would respond quickly, as Dan Mackay won a free kick on the left side. Sean Welsh would swing the ball in expertly for the clinical Billy Mckay to head in the equaliser.

It was a similar story minutes later, as Billy Mckay won a free kick just past the centre circle, Sean Welsh would whip in a delicious cross again, for Danny Devine to tap in. 2-1 Inverness on 40 minutes.

44 Minutes in, Inverness would win a penalty. David Carson played in a good cross to Billy Mckay, whose header was met by the hand of Cove goalscorer Jack Sanders. Sanders received a yellow card for the infringement. Billy Mckay would step up for his second of the game, finishing it confidently and taking Inverness into halftime 3-1 up.

Only one change was made at half time by Cove. Mark Reynolds made way for Kyle Mclelland, who did not make the start to the game he would have hoped for. Cove keeper Stuart McKenzie showed poor distribution from the back, as his pass would be played straight to the opposition in the middle of the park. The ball made its way to Dan Mackay, who darted into the box and played the ball across the on-coming goalkeeper. Billy McKay stretched to try to make a connection for his hattrick, but Mclelland came in and hit the ball with some power into an open net. 4-1 Inverness.

There would be another own goal on 51 minutes, benefiting the hosts. Sean Welsh once again with a dangerous delivery, was attempted to be cleared by a punch from Stuart McKenzie, which would deflect off Cove right back Scott Ross and into the back of the net. 5-1 Caley Thistle.

12 minutes later for the 5th Inverness goal, Billy McKay completed his hat-trick on 63 minutes. This would come from excellent play from new boy Jay Henderson on the right-hand side, as he showed great skill and finesse with a cross to the back post that would find Aaron Doran, who headed it goalward, hitting the far post. The rebound was met by Billy Mckay who gave it everything to make it to the free ball. This goal would make it 6-1 to Inverness.

The home side would finish the game strong, creating several more opportunities and defending stubbornly, not conceding another goal. Billy Dodds would be delighted with his team’s performance. A brilliant start to the new year for Caley Thistle.

Man of the Match – Billy McKay