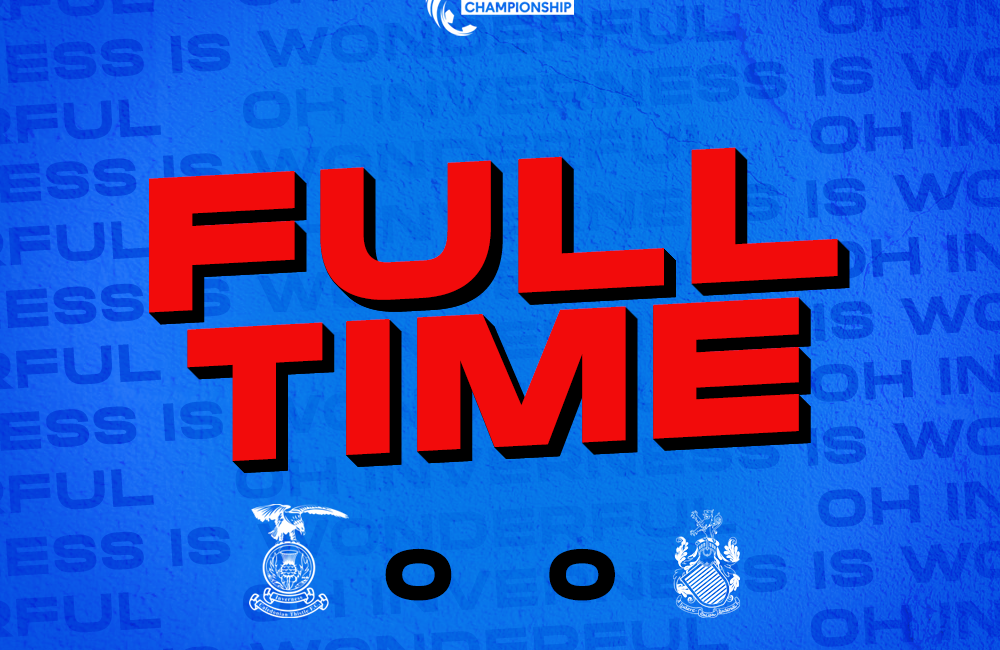 Inverness Caledonian Thistle were held to a 0-0 draw at the Caledonian Stadium against Owen Coyle’s league leaders Queen’s Park in the Scottish Championship.

The draw will mean that Caley Thistle remain in 6th place – level on points with Morton in 5th who also have a game in hand. For Queen’s Park, it would be the first time Owen Coyle’s men drop points since the beginning of November, although they remain at the summit, four points clear of second-placed Ayr.

Billy Dodds stated before the game that his side “Must not lose”. Dodds and Inverness knew it would be a tough task to prevent top scorer Simon Murray. Despite many good chances for the star-man, Danny Devine and co managed to do exactly that.

The previously mentioned Danny Devine was a standout for Inverness, making some crucial blocks to help earn his side the point.

Despite many chances from both sides in a very end to end game, neither side were able to break the deadlock, defending brilliantly throughout.

Inverness came into the game with no changes to their starting XI – but welcomed back Nathan Shaw who was deemed fit enough for the bench. Inverness would also bring new signing Ben Woods onto the bench.

Queen’s Park would make nine changes from their 1-0 Challenge Cup defeat to Raith, however it would be the exact same team that started their last league win against Cove Rangers.

Both teams started the game positively. Queen’s Park used the high press to try and suffocate Caley Thistle’s men, who would try to use long balls to get behind the high-line of Queen’s Park’s defence.

Both sets of wingers were a big factor of the first half, attacking the full-back at every opportunity they had. Jay Henderson created multiple chances for himself by cutting onto his left foot. Dan Mackay had a chance himself, and Dominic Thomas would also have a few shots to put the away team ahead.

The best chance of the half would fall to Billy McKay, who was agonisingly close to breaking the deadlock on 18 minutes. Jay Henderson’s cross from the right would find McKay in the middle who headed it well, down to the keeper’s left, bouncing off the turf on the way. Ferrie would just manage to push the ball away from goal.

Although having more possession in the first half, Queen’s Park did not create as much as Inverness – Caley Thistle with 6 attempts compared to Queen’s Parks 3.

Simon Murray, who was quiet in the first half, would start the second half well by showing great skill to get past David Carson and fire the ball at Mark Ridgers who would make a good save.

Both teams continued to push to try and win the game, and in the 74th minute, Murray nearly did exactly that. A mix up in the box with the Caley defence would cause the dangerous Murray to pounce onto a loose ball. Murray’s shot would go past Ridgers and looked destined for the back of the net, however, Danny Devine would make a crucial block on the line to keep the scores level.

Inverness tried to get a late winner, with chances from substitutes George Oakley in the 91st minute, and Lewis Nicolson in the 92nd not enough to win the match.

Man of the Match:

“They had a few really good chances and we have a few great chances, especially in the first-half. Their goalkeeper had some very good saves for them and I thought our back four stood up well. Every time Mark Ridgers was called upon he made some decent saves.”

“We were solid defensively, it was a right open game for a 0-0, as I said I can’t believe it finished 0-0 but it did. It was probably an enjoyable contest for the supporters of both teams to watch.”

The full interview with Billy Dodds can be found below: