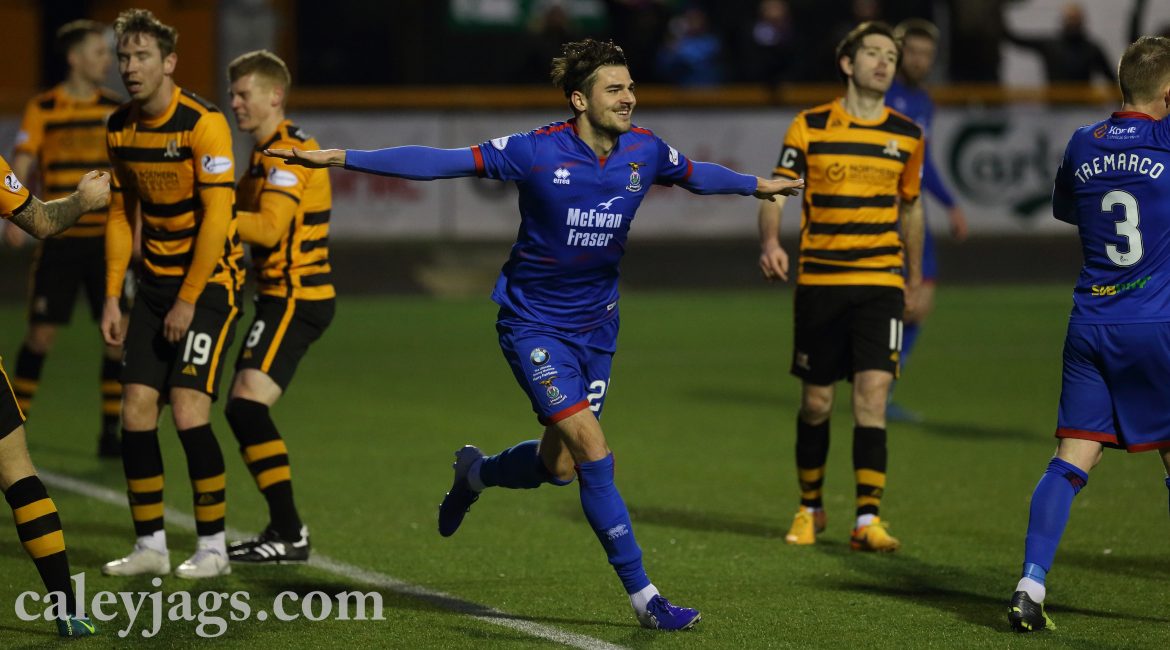 Charlie Trafford’s header five minutes from time sent Inverness Caley Thistle through to the Fifth Round of the Scottish Cup as the Caley Jags beat Alloa 3-2.

John Robertson made two changes to the side which beat Dundee in the club’s last match, as Brad Mckay and Jordan White came into the side for Coll Donaldson and Nikolay Todorov.

There was returns to the squad for Sean Welsh and Tom Walsh, who both made the bench.

Caley Thistle had to only wait until the 8th minute to take the lead, it was a fantastic move from Inverness which saw Keatings find Rooney down the right hand side, and his cross found Aaron Doran in the middle of the box, who took a couple of touches and fired it into the top corner to open the scoring.

Inverness continued to press on and Miles Storey saw his shot from about 20 yards go wide of the post.

The hosts levelled the game after 17 minutes, Kevin O’Hara nodded in Hetherington’s corner from close range.

Caley Thistle looked to respond quickly and after 21 minutes Carl Tremarco’s cross found Jordan White in the middle but his header was held by Jamie MacDonald.

After the half-hour mark, Mark Ridgers was called into action as he produced a superb save to deny Adam Brown from close range after he was able to turn and shoot in the box.

The first-half ended level, but the Caley Jags started the second half really on the front foot.

After 50 minutes, Jordan White was close to making it 2-1 as Aaron Doran nodded Miles Storey’s cross across the box but the Caley Thistle striker’s effort was over.

Five minutes later, Ridgers was called into action again as he produced a fantastic one handed stop to deny Liam Buchanan.

Caley Thistle had the lead again after the hour-mark, Aaron Doran’s corner was met by Jordan White in the middle of the box and the strikers header flew past MacDonald to make it 2-1.

Alloa kept going though and got themselves level with 15 minutes remaining, Kevin O’Hara got his second of the match with a tidy finish after he met Lee Connelly’s cross in the middle.

Caley Thistle then looked for a response and after 82 minutes Tom Walsh, making his return from injury, saw his effort go just over the bar.

With a replay looming, Caley Thistle found a winner through Charlie Trafford.

It was another corner which caused Alloa problems as Doran’s corner was headed across the box by Shaun Rooney and found Charlie Trafford in the middle as his header flew in, to make it 3-2 as the Canadian celebrated with a section of the traveling Caley Thistle fans.