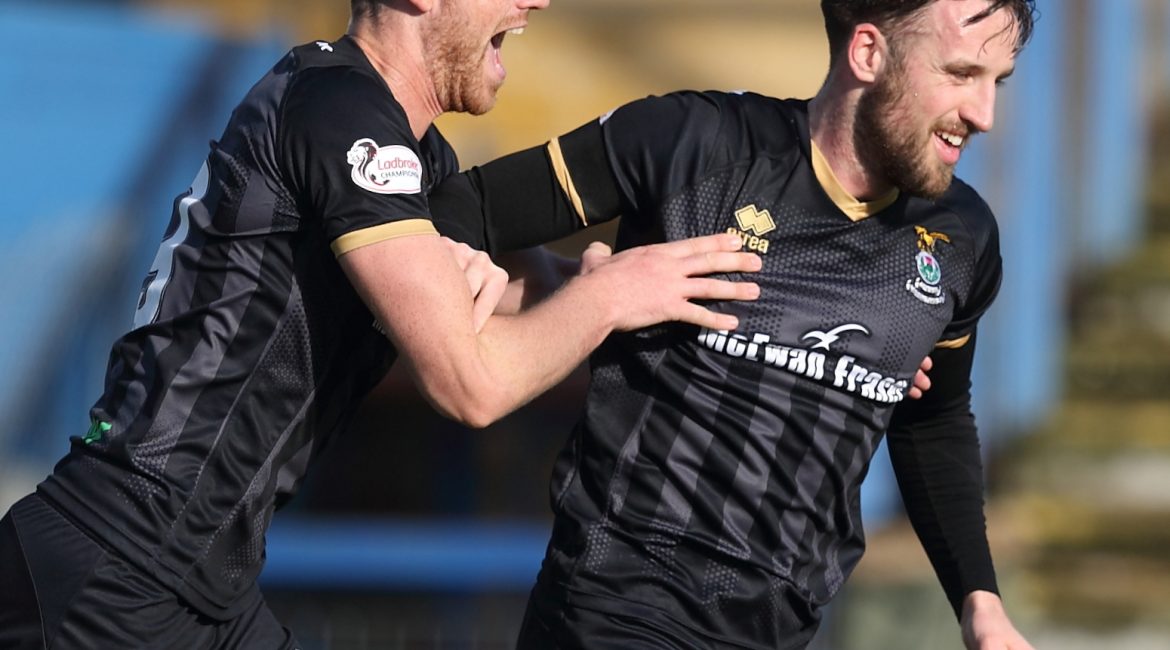 The Caley Jags remain in 5th place but they have now closed the gap on 3rd to just four points and have a game in hand over Dunfermline who sit fourth.

It only took 8 minutes until Caley Thistle were ahead as Aaron Doran capitalised on a loose back pass by Jacobs as he rounded Alan Martin to slot in.

Queen looked for a response as Dykes had an effort turned behind for a corner while Dobbie saw an effort blocked.

Brad Mckay doubled the lead for the Caley Jags on the 21st minute as he met Liam Polworth’s corner at the back-post and hisbehader went in via a deflection.

On the 24th minute, Jordan White had the ball in the back of the net as he headed home from close range but his effort ruled out for an adjuded foul on the Queens centre-back.

Mckay was called into action at the other end as he blocked Dykes’ effort. The resulting corner from Queens was well worked and found Stirling in the box but his header was wide.

Jordan White was close to making it 3-0 after 35 minutes, the Caley Jags striker saw his effort turned behind for a corner by Martin.

Caley Thistle then hit the cross bar as Joe Chalmers’ corner caused problems in the box with White’s effort coming off the bar and the follow up was out wide.

There was a change in goal for Queens at the break as Jack Leighfield replaced Alan Martin.

Jamie McCart has an early second half chance as his header was flicked just wide. On the 56th minute, Chalmers’ corner found White in the middle but the striker’s header was wide.

Mark Ridgers pulled off an incredible double save as he denied Stephen Dobbie twice as the ball broke to the Queens forward at the back-post. Lyndon Dykes was then sent through on goal and Ridgers pushed his effort wide.

It was a busy period for the Caley Jags number one and he stood up to it as he pushed another effort from Dobbie wide. With twenty minutes left, some space opened up for Sean Welsh and his effort bounced just wide.

John Robertson made two subs in the final ten minutes as Darren McCauley replaced Aaron Doran and Charlie Trafford was replaced by Shaun Rooney. Rooney was involved instantly as he out Jordan White through on the 85th but Leighfield saved the striker’s effort well.

The Caley Jags saw out the remaining stages to secure a big three points going into Friday’s Highland Derby against Ross County.