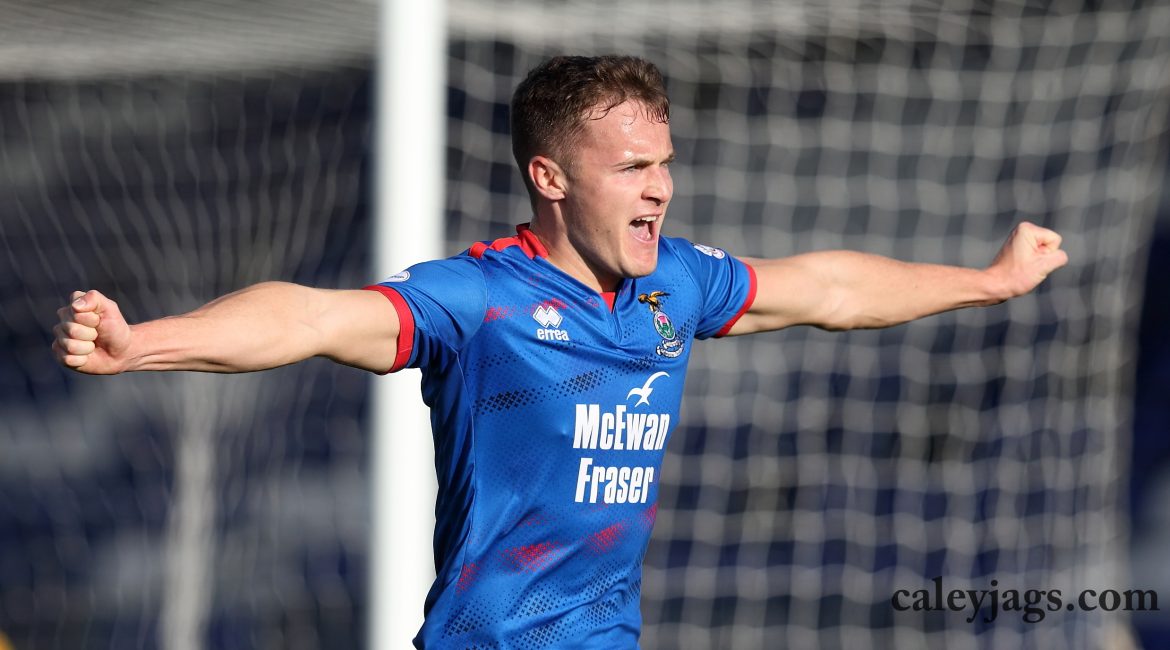 Caley Thistle dispatched Alloa 3-0 at home, as they progressed through to the Quarter finals of the Tunnock’s Caramel Wafer Challenge Cup.

Scott Kellacher and Barry Wilson fielded a refreshed team from the away game at Ayr United. Mitch Curry played first game since injury, alongside five other changes for the home team.

Alloa Athletic hoped that their first eleven would do the job, naming only three subs on the bench. For the most part, the first half was a frustrating affair for both teams; the visitors barely gave up chances on their goal during a pleasant sunny Highland day.

In fact, it was Scott Taggart who had the first half chance of the game for the visitors via a speculative shot from around 25 yards. Cammy Mackay had an easy job saving it as it went down the middle of the goal.

Immediately after, Mitch Curry broke through the Wasps’ back line on the right from a break and managed to sneak out an effort, but it was deflected onto the side netting. Miles Storey managed to take down the cross from the corner but his half volley didn’t stay down and went over the crossbar.

Over 20 minutes, the Caley Jags had a series of opportunities to open the lead that weren’t taken, even though they had more than their fair share of the ball.

Roddy MacGregor leapt well for a cross to test the goalkeeper from a header – getting it on target – and Jamie MacDonald managed to claw the ball one handed to keep it from going out on a corner.

Cameron Harper had a pop from the left hand side of the box Around five minutes later and managed to get it on target and keep it low, but didn’t put enough power on it to beat the keeper.

Coll Donaldson took the ball up the pitch and whipped in a juicy ball from deep that came inches from Roddy’s foot – a let off as they young forward had plenty of space to take it down.

With the first half ticking down, it was looking likely that it would end 0-0 going into the tunnel but Mitch Curry would have a final say at the 42nd minute.

The winger latched on to a slack back pass by their left back, Nathan Gilhooly and took on the defence by himself. He attacked the space on the right hand side of the box with only one payer to beat and plenty of space to run into and he cut a low shot towards the far corner’s side netting.

Jamie MacDonald couldn’t get to it and Mitch Curry wheeled away to celebrate his first goal on his return from a long time out of action. He again created a chance to add a second goal a minute later but this time his left footed shot was met by MacDonald at the near post.

After the second half whistle was blown, the game’s tempo picked up.

At the 52nd minute, Cameron Harper took a quick short corner to Roddy MacGregor, who after cutting onto his weaker left foot, managed to smack a shot through a crowd on goal. The deflection made it a little harder to handle, but MacDonald got down to save.

Five minutes later after great play from ICT’s attacking trio, Aaron Doran ran onto a loose ball from a half clearance and his half volley looked to be rippling the net, but it managed to bend away from the target at the last second.

The second goal came from a mix of technique and luck in favour of the home team. Charlie Trafford took the ball in space in front of Alloa’s defence and after setting himself, hit a firm shot towards goal. It took a slight knick off an Alloa leg and that fooled MacDonald and helped it in for the second goal of the game.

Alloa didn’t have many chances to respond, but came closest to adding a consolation goal from short range. At the 68th minute, Alan Trouten beat the offside trap and took his time one on one, with Cammy Mackay encroaching and making himself big. Trouten opted for the right hand corner, bending it around the goalkeeper but it didn’t tuck in enough to go in off the post, instead bouncing away and out of danger.

They arguably came closer at the 82nd minute. Adam Brown took aim with a low effort 25 yards from goal – which was save – and Mackay did well to dive for the follow up by sub, Robert Thomson, smothering it.

But the Caley Jags would still have time to add gloss to a fairly tight game just as the clock ticked down. Miles Storey floated a great pass from the right hand side to the back post, which was met by the young Matheus Machado who ghosted in and slotted a neat finish. It was the first senior goal for the recent sub and it sealed ICT’s progression into the next round.