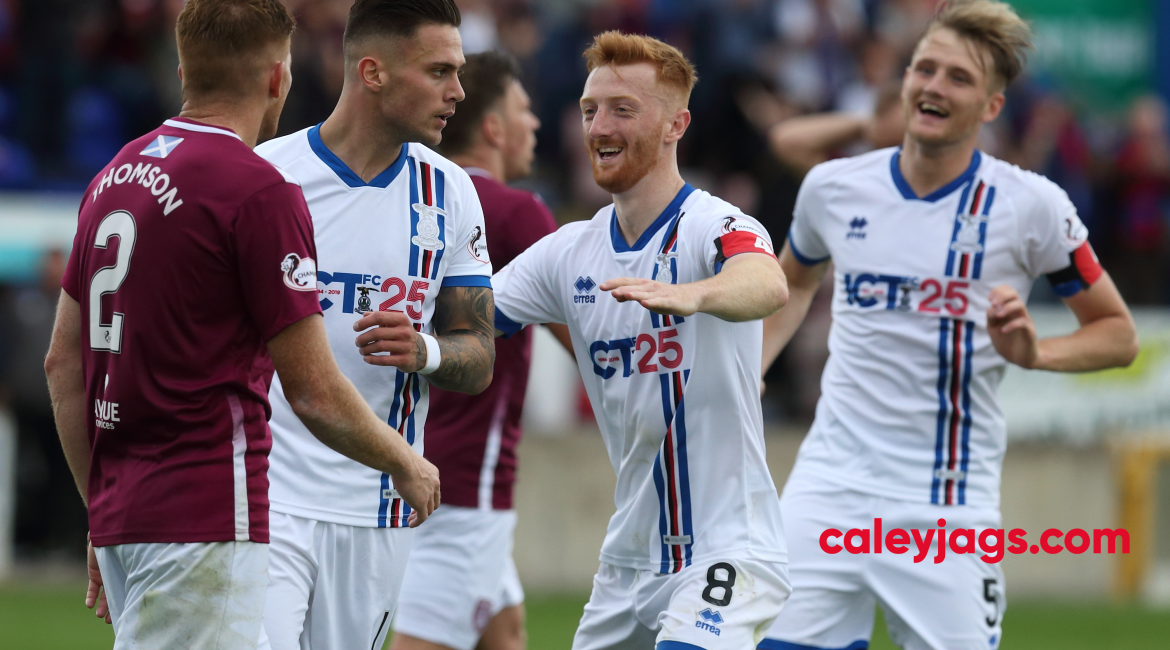 25 years ago almost to the day, ICTFC faced off against Abroath FC in the Caley Jags’ first league game as a football club. A quarter of a decade on and a few divisions up, they faced each other once again at the Caledonian Stadium, with ICTFC appearing in special white ICT25 commemorative third kit to celebrate the milestone.

Saturday was a chance for two teams to roll back the clock and reflect on a shared history. The first time they had met, ICTFC won 5-2, and again the hosts would be victorious, albeit via a tighter margin, in the first home game of this season; taking the three points via a Miles Storey effort in the 82nd minute.

The only changes for the home team from the loss at Tannadice were at RB – Shaun Rooney slotted in for Brad McKay – and in the middle of the park, with James Vincent replacing Charlie Trafford. Arbroath made only one change to the first team line-up, with Thomas O’Brien returning from a suspension in place of Robert Wilson.

Before the start of the match there was a minutes applause in memory of Alan Hercher, who died one year ago. Alan scored a hat-trick in this fixture 25 years ago, each player was wearing an armband with the number four on it to remember Alan. There was also the opening of the Alan Hercher enclosure in the North Stand.

For large stretches of the first half, both teams were on equal footing, with each taking it in turns to control the ball. Arbroath had the first chance to test the opposition goalkeeper but squandered it. Shaun Rooney had a late foul on Bobby Linn and that same player stepped up to slip the ball under the wall and against the side netting from roughly 18 yards.

ICT were equally keen to start with their best foot forward and through pressure on the visitor’s defence, managed to force a mistake in the opposition half. From a Jordan White flick-on Arbroath’s defence failed to clear, allowing Aaron Doran to force the ball through and have a left footed crack at goal from outside the box – it wasn’t hit hard enough to cause Derek Jamieson serious trouble, though.

Doran would come closer to open the scoring ten minutes later. The Irishman manage to break the offside trap from a sly Keatings pass and he took his time in the box to pick his spot from an acute angle – Jamieson made himself big enough to block the shot. Tom Walsh picked up the loose ball and followed up with a left footed strike that was palmed away for a corner.

Persistence was key for the home team and this time James Vincent worked the ball to Jordan White on the inside left hand side of the box for a decent crack at goal. Hitting with his left foot, it seemed like his effort was blocked by Jason Thomson’s hand on the way to the goal, but Mike Roncone didn’t see it as a foul and played on. James Keating’s overhead kick a few seconds later was well saved.

The Red Lichties were certainly hard to break down and were well drilled under Dick Campbell, and it was they – arguably against play – who managed to open the scoreline at the 26th minute.

Jason Thomson’s cross from the right hand side was punched clear by Mark Ridgers and landed at Linn’s feet, 18 yards out. He was allowed to take aim and he fired home into the bottom right corner to put Arbroath ahead.

Aaron Doran was the most likely to respond for ICT, having taken a few of the chances for the home team and it would be he that would ensure that the Caley Jags wouldn’t enter half time goal-less.

James Keatings again slipped Doran through in the middle one on one, and after giving Derek Jamieson the eyes, calmly slotted the ball in the opposite right corner to equalise.

The second half was a more of a one-sided affair as the Caley Jags seeked to end the game with the full three points.

Seven minutes into the second half, Shaun Rooney set up an onrushing Walsh on the right hand side and he took his cross first time, cutting back into the middle of the box. Aaron Doran met it on the run and kept his shot down, but couldn’t match power with accuracy and it was saved.

Looking at his bench, Robbo changed tactics, taking on Miles Storey, in place of the hard working Jordan White. And this change would prove to be wise as the recent signing would find the winner with a dash of fortune on his side.

After he received the ball on the left wing, he cut inside to strike towards the near post. With the shot too hot to handle, Jamieson failed to get enough on it and could only push it into the opposite corner of the net. It was Miles’ second debut goal for the Caley Jags and it was enough to win the tie.

Near the death ICTFC cut it close in keeping their lead, after allowing Luke Donnelly to spin and shoot in the box, but thankfully Ridgers was there to get down to save.

Man of the Match: David Carson