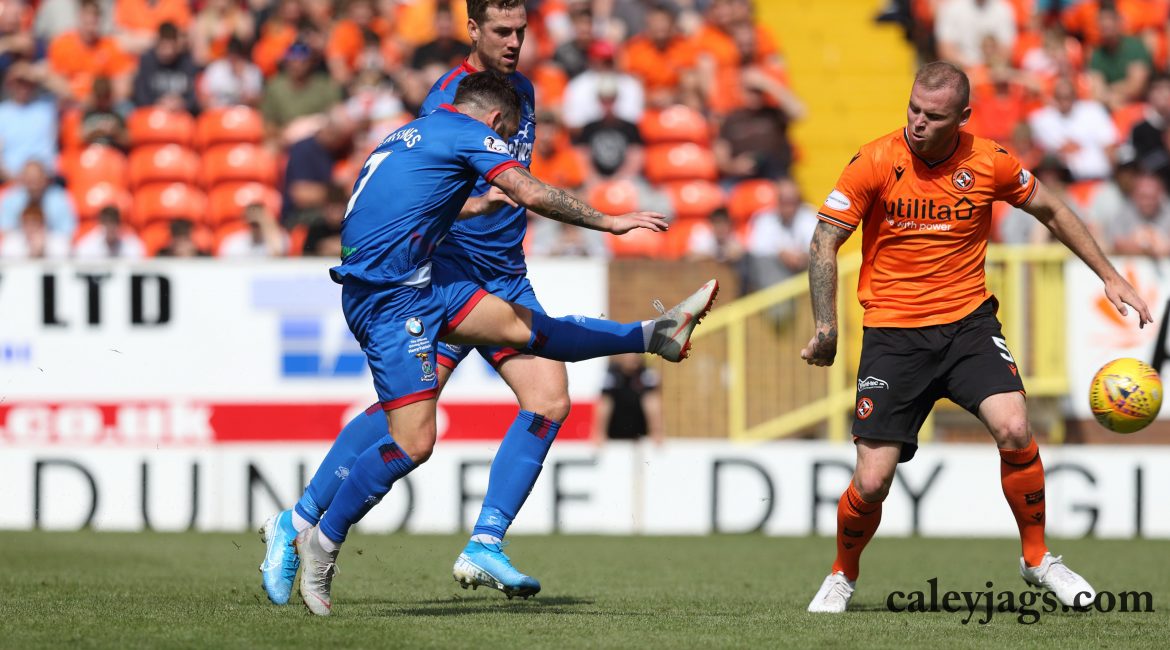 Lawrence Shankland scored all four goals for Dundee United as they won 4-1 against the Caley Jags on the opening day of the Championship season.

John Robertson made one change to the side that lost 1-0 to Dundee last week in the Betfred Cup as David Carson replaced James Vincent. Miles Storey took the place of the injured Mitch Curry on the bench.

Caley Thistle could have had the lead early on as Jordan White found James Keatings in the middle but his effort hit the post and went behind.

Jamie McCart did well to get back to prevent Louis Appere breaking clean through. But United soon had the lead.

United worked a throw in and some good work from Appere as he put in a great delivery for Lawrence Shankland in the middle and he bulleted a header past Ridgers on seven minutes.

The Caley Jags looked for an instant reply as Siegrist parried away an effort from James Keatings.

After 15 minutes, a good move from United resulted in Nicky Clark firing just wide of the mark.

Brad Mckay then was forced off after going up for a header and landing awkwardly. Mckay was stretchered off and was taken to hospital.

Caley Thistle did draw level after 29 minutes, a corner was swung in James Keatings as somehow Siegrist saved Jamie McCart’s initial header and rebound fell to Tom Walsh to make it 1-1.

However, the game wasn’t level for long as United broke and just a minute later Shankland glanced in his second header of the afternoon from close range.

In the second half, straight after the re-start, Paul McMullan put a dangerous cross in the middle which Ridgers needed to parry away but it was then cleared by Coll Donaldson.

After 53 minutes, Shankland completed his hat-trick with his third header of the afternoon. Shankland headed in from about 6 yards after meeting Appere’s cross.

James Vincent almost hit back for the Caley Jags as he put Charlie Trafford’s cross inches past the post after 56 minutes.

United made a change as Cammy Smith replaced Nicky Clark.

John Robertson then made a double change as Miles Storey and Nikolay Todorov replaced Jordan White and James Keatings.

United had their fourth on the 86th minute and again it was Shankland the scorer. The United striker swivelled in the box and fired low into the bottom right hand corner.