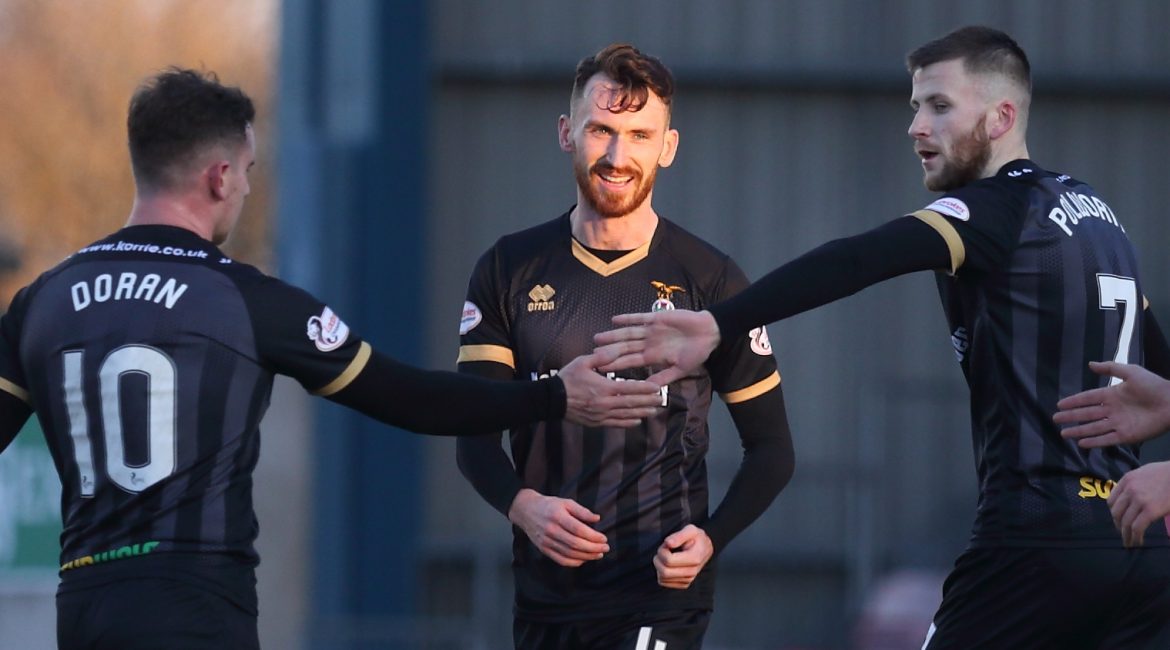 ICT dispatched East Kilbride FC to progress into the 5th round of the William Hill Scottish Cup, having put three goals past the visitors in the first half. An own goal at the 72nd minute added gloss to the 4-0 scoreline, rounding off a fairly comfortable result for the Caley Jags.

The away side came to the Caledonian stadium with an impressive recent record, having notched up 11 straight wins, and 4 straight clean sheets prior to the tie. Home fans could be treated to a familiar face in the form of David Proctor, who had two spells in the Highlands and had memorably scored against Celtic in a 3-2 comeback win in 2007.

John Robertson picked a strong first team to face East Kilbride; bringing back George Oakley to the squad and starting him alongside Jordan White in a 4-4-2 formation.

Three minutes into the game, ICT fired the opening salvo in their attempt to get ahead early. Captain Carl Tremarco hit a low cross to Oakley in the middle, who couldn’t keep the ball close and it landed to Liam Polworth. Polworth looked up and stabbed the ball towards an onrushing Shaun Rooney on the right hand side and he slapped it hard at Mathew McGinley, who struggled to keep it from slipping out of his grasp.

But three minutes later, the Caley Jags had further joy on the left hand side and scored the opening goal. Aaron Doran received the ball and worked it onto his right foot from the edge of the box and dinked it to Oakley. The Englishman was clattered a little by nearby defenders, but the ball fortuitously landed to White, who took the ball down and slotted it into the corner of the net – a fourth goal in two games in the Scottish Cup for the striker.

From there on, Caley prodded and probed to extend the lead. Shaun Rooney leapt like a salmon to ambitiously chip the keeper with a header from ten yards, but his attempt landed on the roof of the net.

A few minutes later, Polworth picked up a slack pass and was allowed to drive towards goal. A fitting tribute was being paid to recently passed away super-fan, Dawn Sinclair, and ICT’s number seven almost contributed to a touching moment with a goal. As he got to the box, he wrapped his foot around the ball and it seemed destined for the top corner, but it brushed the side netting.

The second goal of the game came via a moment of quality from Aaron Doran. Shaun Rooney crossed from deep to Oakley on the edge of the box, and with his back to goal, he teed up Doran just in front of him. The Irishman cut inside from the left and curled a dipping shot away from McGinley and into the net, giving him no chance.

Barely five minutes later, Polworth tried to outdo the vice captain with an even more impressive effort. Doran had a one two with Polworth and then set up Liam with barely anyone marking him nearby.  After taking a touch, he cut across the ball and hit it so sweetly, the ball moving from right to left and just missing the target.

The final goal of the first half was a dissection of the East Kilbride defence. Aaron Doran threaded through Joe Chalmers on the left, who seemed to shape to shoot, but instead squared to Polworth in acres of space at the back post. He couldn’t miss and smashed it into the roof of the net.

East Kilbride had one real chance to fight back against the hosts in the first half, five minutes before half time. Christopher Humphrey managed to aim a well struck shot from 12 yards on target and forced a superb save from Mark Ridgers. The shot was too hot to handle and the Caley Jags number one could only parry it away. Having barely seen the ball during that half, he did well to keep focus to block the attempt.

The second half resumed pressure on the EKFC backline. At the 51st minute, Joe Chalmers took an inswinging corner and it was flicked to the centre of the box and Brad Mckay stuck a leg out. The defender, who was making his 100th appearance for the team, could not get above the ball and blazed it over from close range.

A few minutes later, Sean Welsh tested the  keeper with a great shot from the edge of the box. Jordan White took the ball from the left and cut a pass back to Welsh. The midfielder struck it hard and low and the keeper did well to keep it out, with it seemingly going towards the corner.

The visitors may have felt disappointed with a chance to score from the spot being waved away minutes after Welsh’s chance. East Kilbride’s Paul Woods knicked the ball past two defenders on the left  and drove towards the touchline, shifting onto his right foot. The winger was seemingly brought down by Brad Mckay and the East Kilbride players were convinced Mike Roncone should have pointed to the spot, but he booked the player for simulation and gave a goal kick instead.

Aaron Doran again was involved with the fourth and final goal of the game. The winger flashed a hard and low cross along the face of the goal from the right hand side and it could be only turned into his own goal by Craig Reid, who attempted to clear but prodded it past his keeper.

ICT had many chances to extend the lead and the last chance came at the 85th minute. Recent substitute Daniel Mackay hit a great pass to the right hand side and Doran beat the offside trap to get one on one with the keeper. Spotting Nathan Austin in space to his left, he opted to provide him a chance to notch a goal. But the striker took his time to settle himself and his effort was saved on the line by a last-ditch save.

Caley Thistle will now face Ross County in the Fifth Round as the draw produced a Highland Derby match. ICTFC though turn their attention back to the league next week as they face Falkirk away from home.

Watch the Highlights on CaleyJagsTV HERE