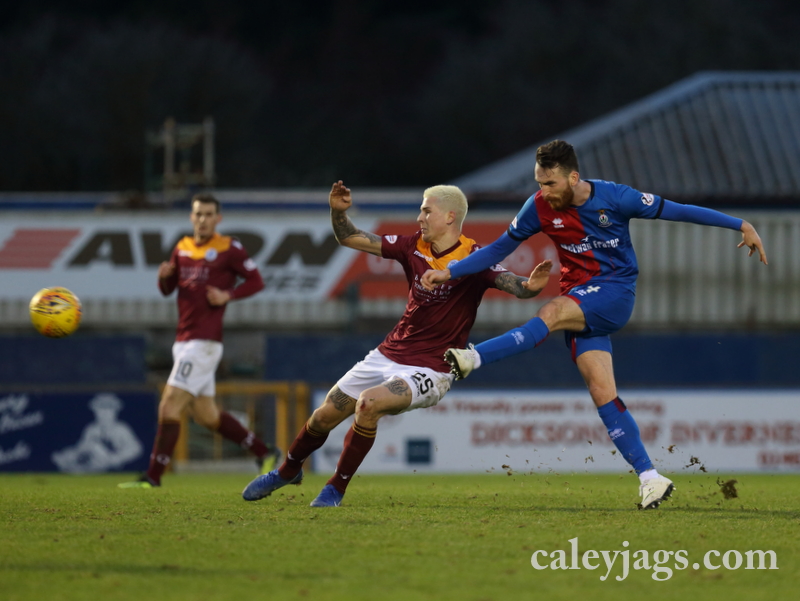 Two quickfire goals from Scott Mercer and Stephen Dobbie in the last six minutes of normal time swung the tie in Queen of the South’s favour, having trailed to a well-taken volley from Tom Walsh at the 69th minute.

The scoreline ended 2-1 to the Doonhammers, as they leapfrogged ICTFC to edge up the tightly packed table to 5th in the Ladbrokes Championship. With one game in hand, John Robertson’s team are two points within reach of the play-off places.

The only change to the ICTFC starting line-up from the Highland Derby was the welcome face of Captain Carl Tremarco, who was making his first appearance for the team since his injury against Ayr United on October 27th. The Caley Jags’ new signing Kevin McHattie slotted straight into the matchday squad, but could only settle for a place on the bench.

The first real chance of the game fell to Liam Polworth, after the ball fell to the number seven in the box. Chalmers and White did well to keep the ball in their possession with many defenders close by. After the ball evaded many players, Polworth latched on and had a pop on goal. Polworth’s strike was low but not quite enough to beat Martin as it was fairly central. Immediately after the Caley Jags attempt, QOTS pushed up the pitch on the right hand side and Michael Doyle crossed to Todd. But the ball did not sit up properly and the midfielder blazed the ball over from 10 yards.

The hosts came within a leg of opening the scoring at the 19th minute. Walsh was unleashed during a counterattack by Jordan White, who sent a great though ball into space to the left hand side. With one touch to settle himself, Tom Walsh chipped a return pass to White in the middle of the box and the striker aimed his header low. Through a clamber of legs, the shot was just saved on the line by Scott Mercer.

A Nicky Law chipped through ball into the Caley Thistle box was enough to cause havoc and led to claims of a potential penalty for Todd, but Barry Cook the referee waved these claims away.

Perhaps with that call denied, it added fire to any attempts from QOTS in fashioning a goal against the hosts – this again came via Todd. After the ball was worked from the right hand side up to the centre of the box, Mercer played in Todd in space and he hit a slippery strike from an angle. Ridgers did well to get down low to keep it out but he couldn’t keep his hands on it; McCart cleared the rebound out for a corner.

Any type of goal would do and the next chance would come via Jordan White. The Scotsman appeared out of nowhere to latch onto a loose ball that seemed to be ushered back to the keeper. White curved around a defender’s blind side and stuck out a leg to prod home, but Martin stayed big and managed to bat it away from extremely close.

The first half ended with an effort that seemed to be an undeniable goal for most of the fans attending. Sean Welsh hit a cross to Walsh at the backpost and his header hit the underside of the bar, seemingly destined to bounce over the goal line but instead moved away and out of reach for Martin. A scramble ensued and Semple blocked the follow up from Jordan White. A let off for QOTS, with the home side asking how the ball didn’t settle in the back of the net.

The same story could be said at the start of the second half. Joe Chalmers whipped in a cross from the nearside of the pitch and Coll Donaldson did well to contort himself to reach the ball. The center-back directed his header towards the goal and it seemed to be a set up for someone to tap in, but it missed every body in the box and agonisingly the ball kissed the far post. No Caley player could turn the ball around the post and in.

Todd had a great chance to get one past Ridgers from the left. The midfielder latched on to a through ball and cut onto his right to curl towards the far corner. But Mark Ridgers stretched to keep it out and the loose ball was cleared for a throw in.

Eventually the dam broke in favour of Caley Thistle and it came via a great cross from the club captain at the 69th minute. Carl Tremarco attempted a cross from the far side but it immediately came back to him and this time he half-volleyed the rebound high and across to the back post. Jordan White did well to direct the ball to the centre of the box with his first touch and Tom Walsh volleyed it hard into the net after bouncing it low off the ground.

But the game still wasn’t tied up ten minutes from time and QOTS shocked the hosts with a smash and grab. From the left hand side, Marshall set up the equaliser. The fullback drove to the byline and cut it across to his opposite, Mercer. From point blank range the defender couldn’t miss and it was all square.

But that wasn’t the last goal of the game. Barely after the kick-off the visitors were ahead after an unfortunate moment from Brad Mckay. The filling in right back slipped at the wrong moment, allowing the experienced Stephen Dobbie to get to the ball in space. He drove up the touchline and cut inside to slot a creeping shot into the near post.

Watch the Highlights from the match HERE