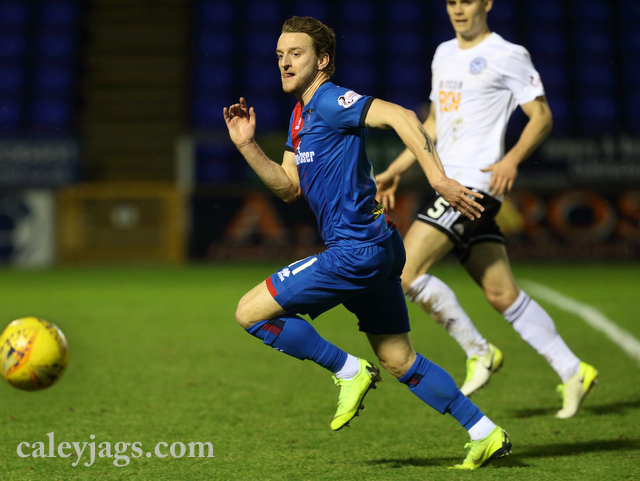 Jordan White’s second-half header was enough for all three points as Inverness beat Ayr United 1-0 at the Tulloch Caledonian Stadium.

With Brad Mckay and Shaun Rooney suspended, while George Oakley and Nathan Austin missed out through injury, Carl Tremarco moved over to right-back while Kevin McHattie made his first start for the club at left-back.

Ayr had an early chance from Michael Moffat as he was sent through on goal but his effort was blocked on it’s way to goal by Carl Tremarco.

Caley Thistle then almost opened the scoring as Aaron Doran met a Tom Walsh cross in the middle but the Irishman’s effort hit the post.  Just after the 20th minute mark, Joe Chalmers took a shot from around 25 yards but his effort was just wide.

Liam Polworth then had an effort which just went over after combining with Aaron Doran on the 34th minute. ICTFC continued to pile on the pressure and Jordan White was close to breaking the deadlock just before the break as he linked up with Doran but the striker’s effort was wide of the post.

In the second-half, Ayr had a good chance to take the lead through Moffat as his header was just over the bar on the 48th minute. Jordan White was close again to opening the scoring as he was played in by Polworth but his shot was inches past the post.

White eventually got his deserved goal on the 65th minute mark with a brilliant header past Doohan. Sean Welsh whipped in the ball from the right hand side and White nodded it in to open the scoring with his 10th goal of the season in all competitions.

On the 72nd minute, Caley Thistle were close to doubling their lead as Chalmers’ corner was only punched clear into the path of Doran but his follow up effort was saved by the Celtic loanee.

The Irishman was then presented with a big opportunity to seal the game with around 15 minutes left as Walsh found him free down the left hand side but Doran effort was just wide of the post.

Caley Thistle held on for a massive three points going into next week’s Scottish Cup tie with East Kilbride at the Tulloch Caledonian Stadium. The result leaves ICTFC just one point off the play-off places with a game in hand over Queen of the South.

Watch the Highlights on CaleyJagsTV HERE