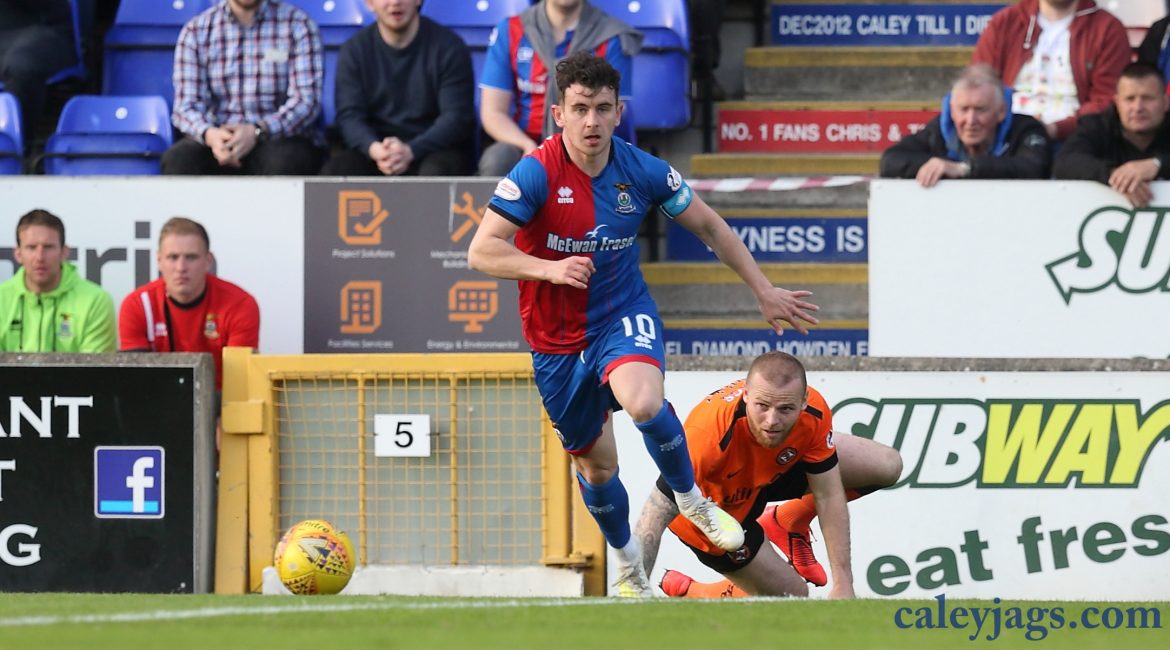 Dundee United won the first leg of the play-off semi finals via a Paul McMullan goal close to ten minutes from the end of the game. But ICT could feel proud in their performance by creating many chances and for controlling the ball for prolonged periods. The sides will now decide who will progress to the Final on Friday at Tannadice Park.

Tom Walsh was the only change to the line-up, picking up a hamstring injury against Ayr but John Robertson opted not to directly replace him in the line-up. Switching from his usual 4-2-3-1, he played a three man back line in a 3-4-2-1 formation. Polworth and Doran played just behind White, while Kevin McHattie and Shawn Rooney pushed up to play as wing backs alongside the usual Trafford/Chalmers combination in midfield.

This new formation was clearly a surprise to Dundee United, who allowed the Caley Jags to have the bulk of the ball for the majority of the first half.

Polworth and Doran especially seemed to play with confidence with the relative positional freedom granted to them going forward. Two minutes from kick-off, Liam Polworth skipped past his man close to the byline and had a cross-cum-shot saved by Siegrist.

But Dundee United also had players that can cause damage and it was a relief at the 9th minute that pressure from Coll Donaldson and co prevented an early goal. Peter Pawlett managed to find a through ball to Sow, who nutmegged Donaldson and after being surrounded by ICT shirts on either side, hit a left footed shot to Mark Ridger’s left. It was low and he managed to just stop it.

Perhaps given a kick to open up the game more, ICT fashioned two of the best chances of the first half in response. The first came at the 16th minute. Liam Polworth knocked a headed pass to tee-up Joe Chalmers 25 yards from goal in the middle. In the cup, Chalmers hit a fantastic shot that opened the scoreline and he almost did it again on Tuesday, letting the ball bounce and then cutting across it slightly; it missed the right post by inches and forced Siegrist into a scramble.

Moments later, Joe would create an even closer opportunity to open the scoring. From the half-back position he floated a cross from the left hand side and it set up well for White to beat his man and aim for the far corner. Siegrist was again beaten but this time the post was there to save him, knicking off and it was eventually cleared.

Perhaps rattled by these chances, Benjamin Siegrust rushed out for a loose ball a minute later and cannoned it off an ICT head. The ball fell to White with the goal gaping but plenty of obstacles in his way. Unable to find the gap to take aim, he eventually found Polworth on the right, but his shot came off a defender’s leg for a corner.

Just as Dundee United seemed to have managed to control the ball, Doran knicked it off of Connolly in his own half, who hesitated. When Doran surged down the left hand side, he spotted White in the middle busting a gut and tried to square towards the near post. White couldn’t catch it and missed the ball.

The first half and second half were joined by two freekicks to Dundee United and two cards to ICT. Both attempts hit the wall but both cards effected the flow of the home team. In the first half, Donaldson was adjudged to have fouled Pavrol Safranko and was booked, putting him on a right rope. But the second half was another foul given from a similar position but with a worse consequence.

During a clearance, Liam Polworth tried to stretch for an aerial ball that Connolly also went for but caught him. It was enough for the referee to brandish a red card and to give Liam his marching orders; an early blow to the home team.

With no deadlock broken, Safranko was taken off for Nicky Clark, and he tested Ridgers shortly after. The number 10 latched onto a through ball and aimed a low ball on target from around 12 yards, but it was tame.

But that was the warning shot from the recent substitute. Quick play from the away team opened up a striking opportunity for Clark, who smashed the right hand post with a low drive. The ball ricocheted away, and Paul McMullan followed up by firing the ball into the bottom corner.

Caley Thistle travel to Tannadice this Friday night with it all to play for in the Second Leg. Tickets are available online and from the Club Shop.