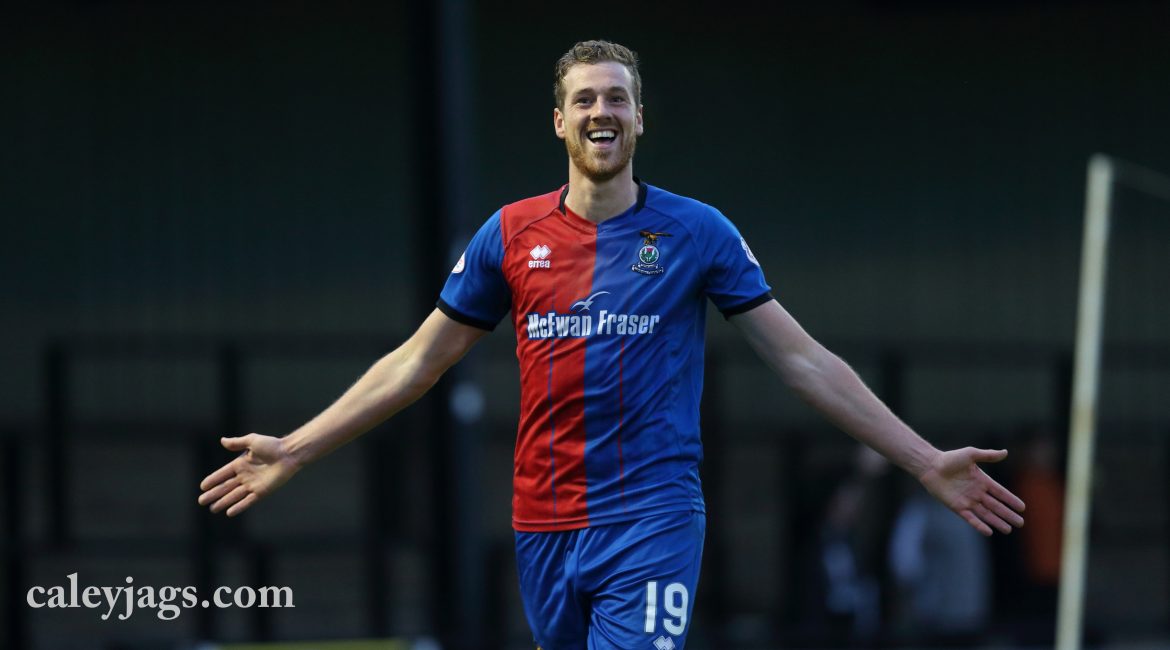 A brace from Jordan White, accompanied by Charlie Trafford’s first-half header, helped give Inverness a 3-1 win at Somerset Park in the Premiership Play-Off Quarter-Final first leg against Ayr United.

John Robertson made three changes to the side that beat Dunfermline 1-0 at the weekend as Liam Polworth, Jamie McCart and Aaron Doran came into the side for Shaun Rooney, Darren McCauley and Nathan Austin.

Liam Smith had an early cross turned behind for a corner, which the Caley Jags managed to get clear.

The first Caley Thistle chance of the match came after 16 minutes, Coll Donaldson’s brilliant pass was flicked on by White onto the path of Chalmers but his effort was fired over the bar.

Jamie McCart was called into action after 18 minutes as he stopped Docherty from reaching Harvie’s cross.

After 27 minutes, Walsh won a corner which was swung in by Chalmers and was just missed by Charlie Trafford.

Trafford did get on the end of Chalmers’ corner five minutes later as the Canadian midfielder headed past Ross Doohan to make it 1-0 to the Caley Jags.

Ayr had a chance from Declan McDaid just a couple of minutes after but he fired it way over the bar.

Ayr made a change at the break as Mark Kerr replaced Robbie Crawford, who was on a booking.

Jordan White extended Caley Thistle’s lead with the first real chance of the second-half as he played through on goal by Aaron Doran and he chipped the ball over Ross Doohan to make it 2-0.

Brad Mckay produced a brilliant block to turn McCowan’s shot behind for corner to the home side.

Ayr were awarded a free-kick as McHattie was judged to have fouled Shankland. The free-kick was rolled to the Ayr striker and had to be tipped over by the gloves of Ridgers.

The resulting corner was headed in by Micheal Rose as he got Ayr firmly back in the game.

Lawrence Shankland made his way through a crowded box and had to be stopped by a brilliant challenge from Coll Donaldson.

With 15 minutes to go, Tom Walsh cut inside and saw his effort deflected and turned behind for a corner.

From the resulting corner, Caley Thistle were awarded a penalty kick as Kerr was judged to have fouled McCart as Donaldson’s flicked on header was heading into his path.

John Robertson made a double sub as Aaron Doran and Tom Walsh were replaced by Darren McCauley and Shaun Rooney.

The wins gives Caley Thistle the advantage going into the second leg this Saturday as the teams meet again at the Caledonian Stadium.

Jordan White spoke to the BBC