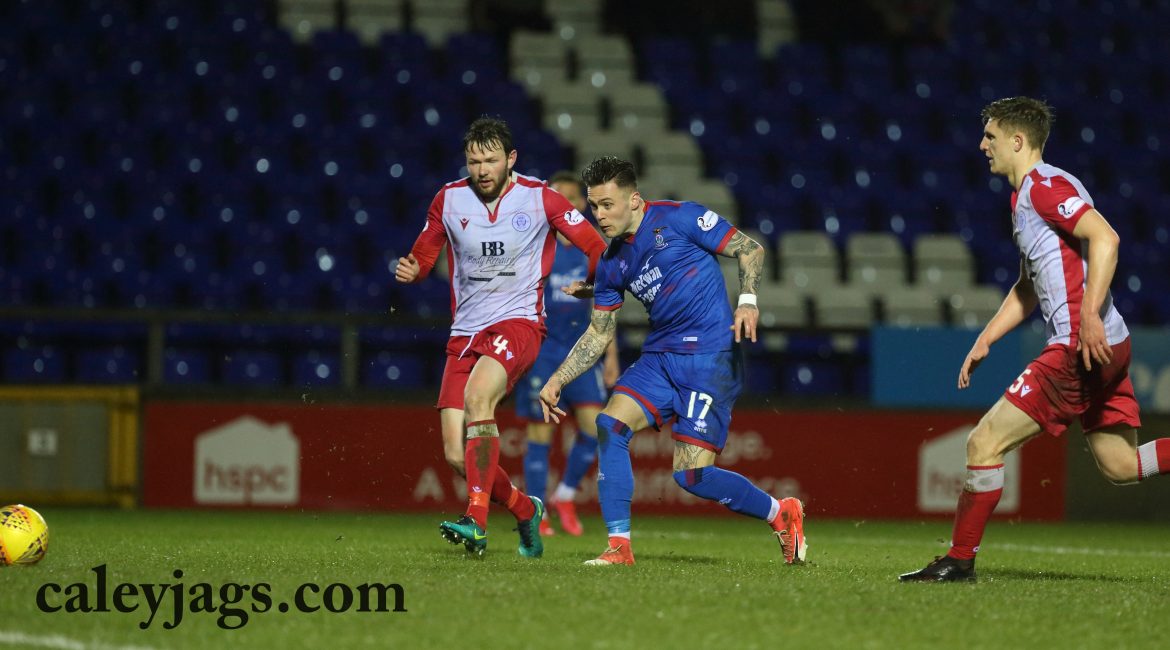 Caley Thistle extended their unbeaten home run to five games as they dispatched Queen of the South 3-1 at the Caledonian Stadium.

James Vincent’s return to the squad was rewarded with the opening goal to the game, James Keatings topped it with a swerving screamer from 30 yards. Miles Storey capped off his hard work off by adding a third with ten minutes to spare.

On the back of the defeat against Alloa on Saturday, Robbo was forced into some changes for the team.

Lewis Toshney was unable to play due to an injury picked up against Alloa. Fellow centreback, Brad Mckay was also out of the squad.

Nikolay Todorov lined up alongside McHattie and Tremarco in a back three, with Harper and Rooney as wingbacks. Vincent, Carson and Trafford sat in the middle of the park, supporting James Keatings and Miles Storey further forward; matching the formation of the visiting Doonhammers.

Allan Johnston had a comparatively easier time picking his team, only swapping out Kevin Holt for Scott Mercer in the starting line-up. They arrived at the ground in a run of unfortunate form hoping to finish it up in the Highlands, having previously picked up no wins in nine games.

The slick pitch made it a little difficult for either team to get a hold of a constant tempo and few changes were conceded in the opening 30. The pick of the bunch landed to James Keatings in acres of space at the 11th minute; the attacker spotted Ross Stewart off of his line and tried to whip a ball over his head from distance, but the ball didn’t dip down below the crossbar.

As expected, QOTS’ leading scorer was the main trouble against ICT’s defence. Stephen Dobbie managed to shuffle into space from the left, only for his cut back shot to dribble wide of the mark. A minute later, he dipped and ducked through a crowd to have another pop from inside the box, this time taking a knick of a Caley player for a corner. The kick was cleared and landed to Iain Wilson on the edge of the box, but instead of threatening the goal, he aimed for the pigeons sitting above the stands – well over.

With difficult rainy conditions forcing some of the home support deeper into the stands, those who could bare it would be rewarded with a goal at the halfway point of the first half.

Carson evaded a tackle near the box to square it wide to Rooney in space. His shot whistled over, but seemingly took a knick and won a corner.

James Keatings whipped in a ball from the far side and his namesake, Vincent slighty stooped to direct it into the net from close range. It was James Vincent’s first goal from coming back from injury.

Either side of the half, Miles Storey was making an nuisance of himself, causing problems for the Doonhammers defence. At the 44th minute he lined a shot up from range and had a go, but couldn’t give it the elevation or power to truly worry Stewart as it came down his throat in the middle of goal.

Just after the restart he squiggled from the right wing to the middle and tried to clip a shot on his weak foot inside the box, but couldn’t get enough of his foot around the ball; hitting it wide off the mark.

He almost made ammends barely a minute later. Cutting the defence in half with a swept ball wide to Carson in space, but Mercer rushed infront of the strike to ensure only a corner would be conceded.

Ridgers had a slight scare before the second goal would be scored for the home team. QOTS’ Scott Mercer cut inside onto his right foot and dug out a deep cross to sub, Deimantas Petravicius in the box. He rose highest to meet the ball, and it barely squeezed past the post on its way out.

From 30 yards out, James Keatings had no right to score as he lined up at a freekick thirty yards from goal. Positioned straight on from Ross Stewart, he hit a “squiggler” up and over the wall, dipping widely past Ross Stewart and towards the left hand corner.

Ten minutes later, Keatings had a chance to get his double from a Storey cut back, but perhaps conditions made his problem harder as he blazed it over from the edge of the box.

QOTS would get one back with the help of the wind. A corner pumped into the box was at first punched away by Ridgers and flicked into the air, but the wind helped push the ball back towards the goal and Semple rose highest to nod it in from inside the six yard box. Scott Mercer also tried to take advantage of the windy conditions, curling a shot from afar from the left hand side, forcing Ridgers into a save.

With the rain dying down a little, Robbo switched up the formation by bringing on Aaron Doran and Tom Walsh, changing the team from a 3-5-2 to a 4-3-3.

Walsh quickly found space easily on the right hand and tried to fire a cross into the box, only for it to be cleared. Carson hoovered up the scraps and unleashed Storey in the middle of the box, who managed to squeeze a toe-poke off the post and in.

Aaron Doran had the last chance to add a fourth from distance. The Irishman cut inside from the left hand side and caught his shot very sweetly, but watched it whistle just wide of the bottom right corner.