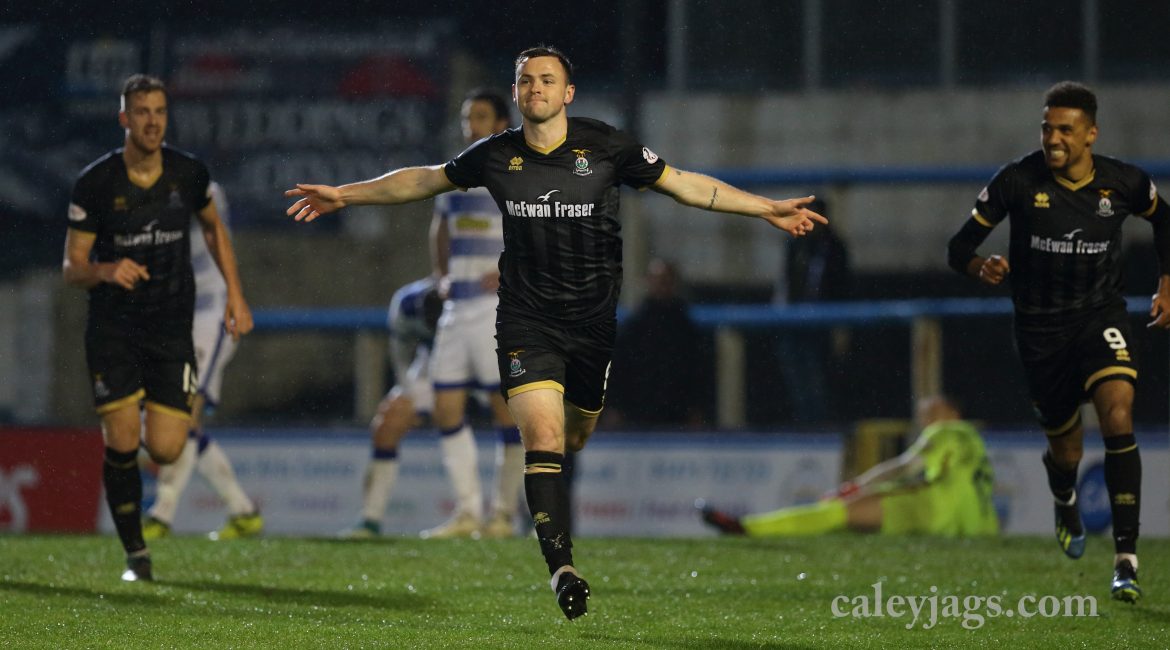 Anthony McDonald had given the Caley Jags the lead with an incredible solo effort before Morton hit back thanks to goals from Reece Lyon and, a penalty from, Greg Kiltie.

The result puts the Caley Jags nine points ahead of Dunfermline with three matches left, meaning ICTFC only need one point to secure a play-off place.

John Robertson made three changes from the side that faced Hearts in the Scottish Cup semi-final on Saturday as Mark Ridgers (Dislocated finger), Carl Tremarco and Tom Walsh were replaced by Cammy Mackay, Kevin McHattie and Anthony McDonald. Coll Donaldson missed out as he continued to recover from a back spasm he sustained against Ayr United.

Cammy Mackay was forced into making a big save after Gary Oliver broke clear in the box but the Caley Thistle keeper was able to turn it behind for a corner.

Oliver went close again after 14 minutes as he met Iredale’s cross in the box, but he nodded it just wide of the post.

Caley Thistle did take the lead after 18 minutes after an incredible solo goal from, Hearts loanee, Anthony McDonald. The Winger produced a bit of magic as he went past three Morton men before reaching the box, with his effort heading in via the post.

Cammy Mackay was forced into another impressive stop after 25 minutes, as he parried Michael Tidser’s effort behind.

The hosts got a leveller after 27 minutes on the clock as the ball broke to Reece Lyon about 20 yards out and he thundered his effort into the bottom corner.

Caley Thistle responded with a couple of chances as Liam Polworth met White’s flick down and fired over while Shaun Rooney tried one from distance but his effort was inches wide.

Morton were awarded a penalty kick just before the break, Gregor Buchanan was judged to have be held by Brad Mckay as the corner was swung in and the referee awarded the penalty.

Greg Kiltie stepped up and sent Cammy Mackay the wrong way to put the Ton 2-1 up.

In the second-half, Morton had a big chance to make it 3-1 as Greg Kiltie’s dinked effort was headed off the line by Shaun Rooney

Morton had a chance just before the hour mark as Gary Oliver dragged a shot wide of the post.

Tom Walsh replaced Anthony McDonald as the Caley Jags went on search of a leveller.

Jordan White could’ve made it all square after 64 minutes as he headed a corner just wide of the post.

White was presented with another headed chance with twenty minutes left as he nodded Shaun Rooney’s cross just wide.

John Robertson brought on Nathan Austin and Darren McCauley as Charlie Trafford and Aaron Doran made way for the final stages.

The Caley Jags were rewarded in the closing stages as Liam Polworth’s cross found Darren McCauley at the back-post and he volleyed the ball into the back of the net to earn a point.

The Caley Jags now face Dundee Utd at the Caledonian Stadium this Saturday, knowing a point will secure a play-off place.

Reaction from Anthony McDonald (Via the BBC)