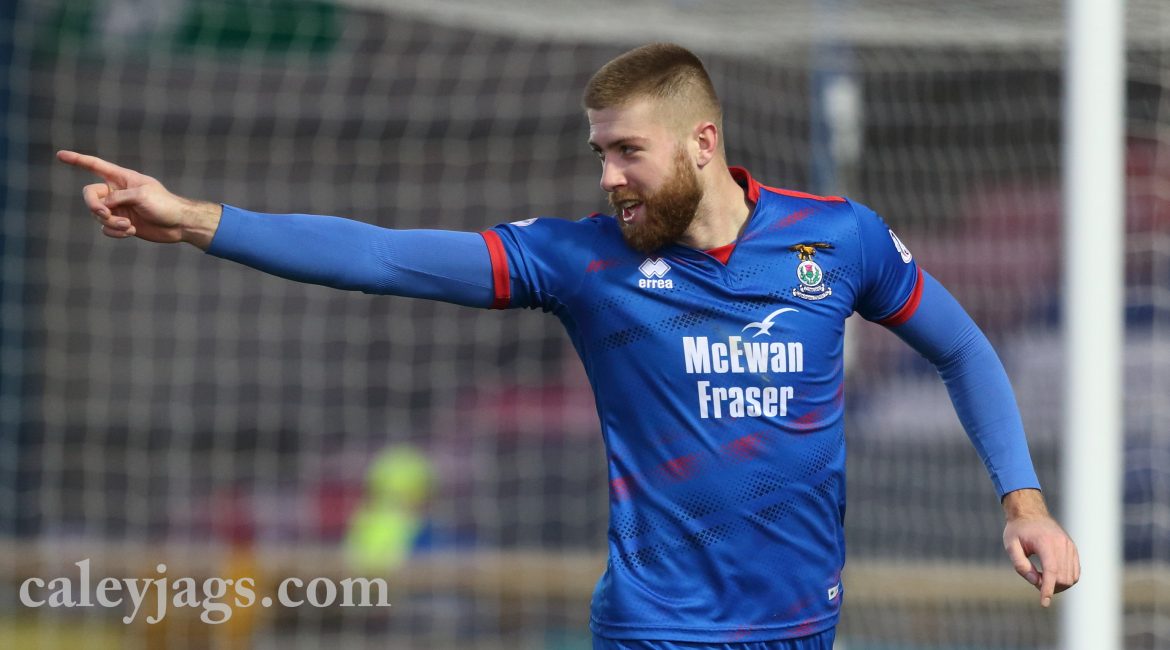 Caley Thistle treated the fans to an early Christmas present of three points, as they beat Dunfermline 2-0 via a neat Rooney volley in the first half and a McCart header, ten minutes from time.

With Carl Tremarco out with a knock picked up fom the away defeat at Partck Thistle, Kevin McHattie started for the Caley Jags – it was the only change made from John Robertson to the team. James Vincent, returning from an injury, made it to the bench.

The Pars arrived at the stadum on the back of a poor league record against ICT, having failed to pick up an away win in 12 years. With that in mind, they made three changes from their defeat to Dundee. Thomson, Paton and McCann started, displacing Kiltie, Cochrane and Turner.

From the off, Caley Thistle looked to open the scoring, firstly via a cute pass from Doran on the right. At the 6th minute his clipped pass to the middle was run onto by James Keatings from around 11 yards out, who swept it first time towards the near left hand post, only for it to whistle past the wrong side of it.

Three minutes later it was Keatings who was being inventive, sending an outside of the foot pass for Storey to run in and behind the defence. His cutback was almost met by White, but this time Paul Paton was wise to cut out the pass just in time.

But Dunfermline would threaten goal with their first big move of the game. Lewis McCann managed to squeeze a pass around the two centrebacks to give Nisbet a free pop at goal one on one. Ridgers rushed him quickly and spread himself to block the low shot, and then was on his feet quickly to catch the headed rebound.

At the opposite end, DAFC’s Ryan Scully was having his reflexes tested as a deflected cross sailed towards his goal at the back post, forcing him to claw it away from the goal line. The following corner was an easier challenge, punching clear at the first ask.

Moments later there was further havok in the Dunfermline box as Doran and Keatings each had a pop at goal, only failing to get it past a yellow shirt for the former and then skewing it wide from the latter; putting it wide of the right hand post and away from White’s stretching leg.

The dam would be broken eventually by the Caley Jags at the 34th minute.

James Keatings’ whipped corner from the right hand side was intially dealt with and quickly proded back to him in space. His second crack at it was guided into the corner of the net by Shaun Rooney, hooking it on the volley in a crowded box.

With the goal in hand, ICT almost picked up a second moments later. A slack back pass was enough for Doran to run onto and was just pipped by Scully who rushed to clear from his line. The ball landed to White who had the opportunity to try to chip the keeper from distance, but Comrie cleared before he could shape his body to shoot.

Dunfermline’s only real threat came from their pair up front, and it was they who fashioned an almost identical chance to end the first half. Kevin Nisbet was played in by Lewis McCann and his low shot was again blocked by a rushing Rudgers and the remnants were booted away by Carson.

Ten minutes from the restart, Miles Storey managed to beat the offside trap with a curved run and with just Scully to beat, it looked to be a certain second of the game.

The angle was getting tighter for Storey to sneak it but just as he was about to shoot, Lee Ashcroft appeared from nowhere and prodded the ball out for a corner. McCart met the whipped set-piece, and just missed the post from close.

At the 62nd minute, former loanee Anthony McDonald was subbed on in exchange for Lewis McCann and he was immediately involved, cutting across a dangerous low cross from the left that had to be cleared for a corner. McCart was on hand to sweep away the loose ball from the set-piece.

Shaun Rooney was full of beans, having notched the only goal of the game against his former side and he was a big handful down the right hand side at the 70th minute. The right back muscled off challenges down the channel to hit a dangerous cross across goal that flashed past any Caley leg to convert.

The lead would finally be extended with 10 minutes to go of normal time, again from a great corner. Doran whipped in a delicious cross from the far side and McCart rose highest to float in a header into the side netting of the goal. The linesman threatened to flag it off for offside, having suspected a final touch by Trafford at the post, but the goal stood.

Dunfermline could only muster a half chance in response moments later. Nisbet fancied his chances from outside of the box and hit what seemed to be a toe poke that Ridgers did well to get down to save.