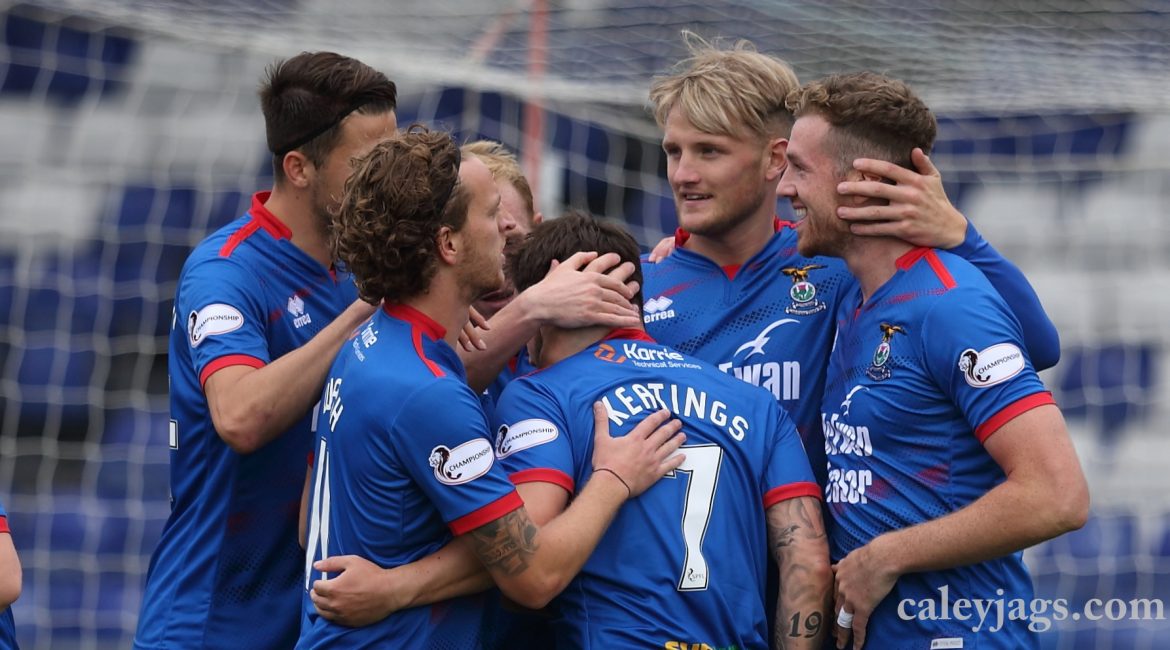 ICTFC secured their first win of the competitive season at home with a comfortable 4-1 win against Raith Rovers, aided by a hat trick of assists from Tom Walsh.

Jordan White started the game well with an early headed finish from a Keatings corner, and the same would be said in the second half for Coll Donaldson and Aaron Doran, who got the strikes for the Caley Jags in response to a Lewis Allan goal for the Rovers.

With the whistle in the referee’s mouth, Tom Walsh held the ball up in the air for Nikolay Todorov to header home at the 90th minute to crown the result.

Robbo made two changes from the loss away at Peterhead: Brad Mckay (injury) and Mitch Curry were replaced by Aaron Doran and James Vincent. The team set up as a fairly conventional 4-2-3-1, with David Carson slotting into right-back for the Caley Jags.

Raith Rovers arrived at the Caledonian Stadium with a clutch of new faces – nine faces in and 13 out. Perhaps due to some injuries, they started play with a 3-4-2-1 formation, with a number of the new signings starting for the visitors.

Raith Rovers started the game with barely a sniff of the ball in the opening stages and the invite for pressure resulted in an early goal for the hosts.

At the 6th minute, ICT won their first corner and the first goal of the game. On the right hand side, Tom Walsh won the set piece via a failed cleared header and James Keatings whipped it in from the far side. From close, the cross was glanced in by Jordan White; a tidy headed finish from the number 9.

12 minutes later, the same combination brought almost a second goal, but this time just wide. Keatings aimed for the back post from the same position and White dived to nod it just wide.

There was another chance moments later from another set-piece. It led from a booking for Raith Captain Kyle Benedictus at the 20th minute, bringing down Walsh who was giving him a torrid time on the right hand side.

From the free kick, Keatings leathered it on target from the right and Ross Munro let the ball slip through his hands and barely gathered; a moment of terror for Raith Rovers’ coach, John McGlyn. In response, Grant Anderson received the ball on the right of the box and tried bending a right footed shot on target but it floated away from the mark.

It was becoming apparent that the key to ICT’s attack was being funnelled through the same combination, Keating and White. At the 35th minute, Keatings lifted a pass over his shoulder to Jordan in the middle in front of the box. He tried to sweep it into the corner right footed but it wasn’t hit hard enough to trouble Munro.

A couple of chances at the end of the half was Raith’s best opportunity to test Ridgers.

A chance was set-up for Raith Rovers at the 40th minute, with a lofted cross from Kieran MacDonald to Anderson after the ball was spread from the middle to the left hand side.

Anderson’s header came off a defender to loop above the bar, with the striker frustrated about his effort. From the corner, Benedictus was unmarked to fire his header just wide of the far post, a wasted opportunity to draw the scores level.

But Raith Rovers came out swinging after the break. At the 49th minute, MacDonald received a ball in space on the left hand side and slid an evasive low cross that went across goal. It wasn’t cleared and it arrived at Lewis Allan’s feet, who tricked Ridgers and calmly slotted it in the left hand corner from ten yards.

But this score wouldn’t last long, seven minutes later the net would be bulging again. A Walsh corner from the left hand side was met at the near post from a textbook run from Coll Donaldson. He slipped his attempt through some bodies and into the net to take ICT back ahead.

But it wasn’t over.

Walsh hit a low cross from the opposite side two minutes later that was missed on the volley by White, but settled nicely for Doran in the middle on the run. The Irishman finished comfortably into the bottom corner to extend the lead.

Tom Walsh’s close control almost created a wonder goal for the Caley Jags at the 75th minute. Starting near the centre circle, he slalomed past his first man and maintained slippery for the Rovers’ defence to stop. Drifting past a few more challenges, he worked the ball onto his left in the box and pinged a shot for the top corner, but Munro spoiled the fun by tipping it over the bar.

Tom Walsh continued to be a thorn in Raith Rovers’ side at the 85th minute, cutting back another enticing cross for Todorov to square home, but the attempt was blocked by a brave Raith leg. The same would be said of Roddy’s follow up just behind him, again meeting a yellow shirt to block a goal from the young winger.

ICTFC seemed to smell blood and continued to prod every gap in their defence. This time Roddy McGregor received a headed pass from Trafford and he slipped through Curry in space inside the box. The winger tried to settle himself but his shot was blocked by Benedictus.

Then it was Todorov’s turn to have a crack. The big Bulgarian spinned his man with his first touch to hit a powerful effort from around 25 yards towards the far bottom corner, but it was wide of the mark.

But the score line wasn’t settled. And Walsh would have the last word. The winger was the man of the match due to his tormenting of the opposition full backs, and with the clock ticking, he skimmed his man and hit a tempting ball in the middle for Todorov to header firmly home from point blank range. 4-1 to the blue and reds.

Man of the Match: Tom Walsh