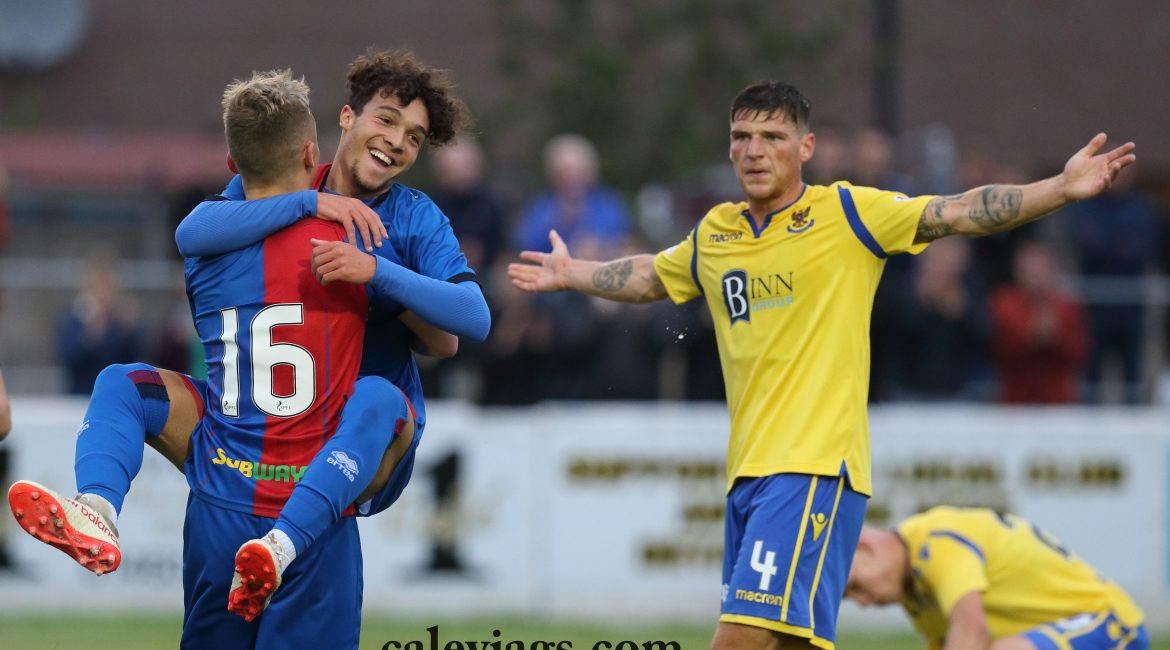 ICTFC finished off their preseason with a comfortable 3-1 win against St Johnstone at Grant Street Park. Goals from Keatings, Todorov and Machado were answered by a spotkick from Tanser; a great primer before John Robertson’s team faces Peterhead in the Betfred Cup on Tuesday.

The Caley Jags started in a 3-4-3 formation, with Nikolaj Todorov slotting into the backline and Jordan White heading up the spear at the top. James Vincent was making his first appearance since returning to the Caley Jags.

Tommy Wright had a strong side with him and for large chunks of the first half, the ball was kept by the visiting yellow shirts, passing between them with ease and fluidity. This possession wasn’t being converted into clear chances though, as ICT posed a sturn defensive challenge and a threat at the break in the form of Tom Walsh from the left.

This frustration could be seen at the 15th minute, with Liam Craig going past his man inside the box and shaping to shoot, only then putting a chance on a plate for David McMillan in the middle. Just before shaping to sidefoot it towards goal, Todorov appeared around his shoulder and cleared the ball.

As an outball, Jordan White was happy to serve as flick-ons and a target man for the Caley Jags, and had his first chance to convert at the 29th minute.

ICT finally managed to get players forward around the box and worked it around to the right hand side for Nicolson to cross first time. It was flying at the perfect height to connect on target for White, but he got too much of the ball and directed it well off target.

This aerial ability would be seen again only moments later. A long ball ball up the park was flicked on by White to Walsh on the left. The winger looked up and from the byline, struck a firm pass across the box and James Keatings was there to convert at the near post, drifting past his man to fire home for the opening goal.

Minutes later, Walsh almost used the same trick to set up another, turning the corner near his halfway line and beating his man for pace to set up another near post finish. This time the Saints had the forsight to have a man to meet it and clear.

In the second half, both sides switched out some of the starting line-up and perhaps this new blood offered something new for the visitors, who opened up their accounts 6 minutes in.

Scott Tanser, who seemed to be playing further up the park as a fullback, attacked a space between the wingback and centreback, only for Harry Nicolson to naively pull his arm on his way into the box. He didn’t go down, but that was enough for the referee to point to the spot and Tanser was there to step up and sidefoot it high to his left for the equaliser.

At the 65th minute, ICT would be ahead again from a setpiece.

A great effort from second half sub, Mitchell Curry, tested fellow sub Ross Sinclair on the edge of the box. The shot was touched around the near post on the left hand side, but the ensuing corner taken from Walsh was whipped in and met by a flying Todorov, who had his shot at playing on both ends of the pitch. He scrunched his head back to make contact and his header came in just under the crossbar for the second goal for the Caley Jags.

A moment later, Coll Donaldson shrugged off a few tackles on the right hand side of the box and collected a rebounded cross to cut inside on his left foot. Somehow finding it in his locker, he bent a drifting shot around the keeper and towards goal with his weak foot. His effort was well aimed and it angled for the top corner but didn’t dip down enough, kissing the crossbar and away.

The final goal of the game came at the 84th minute, and a product of two of ICT’s young lights.

Roddy Macgregor saw space on the right after riding a tackle and pushing forward, and found Curry who squared up and dummied for a second before hitting a low cross to the centre.

The ball didn’t quite make it to Todorov but it settled nicely for Matheus Machado to fire neatly into the bottom corner from around 12 yards. It was well deserved for the young Brazilian, who had looked very energetic since his substitution for Tom Walsh on the left hand side.