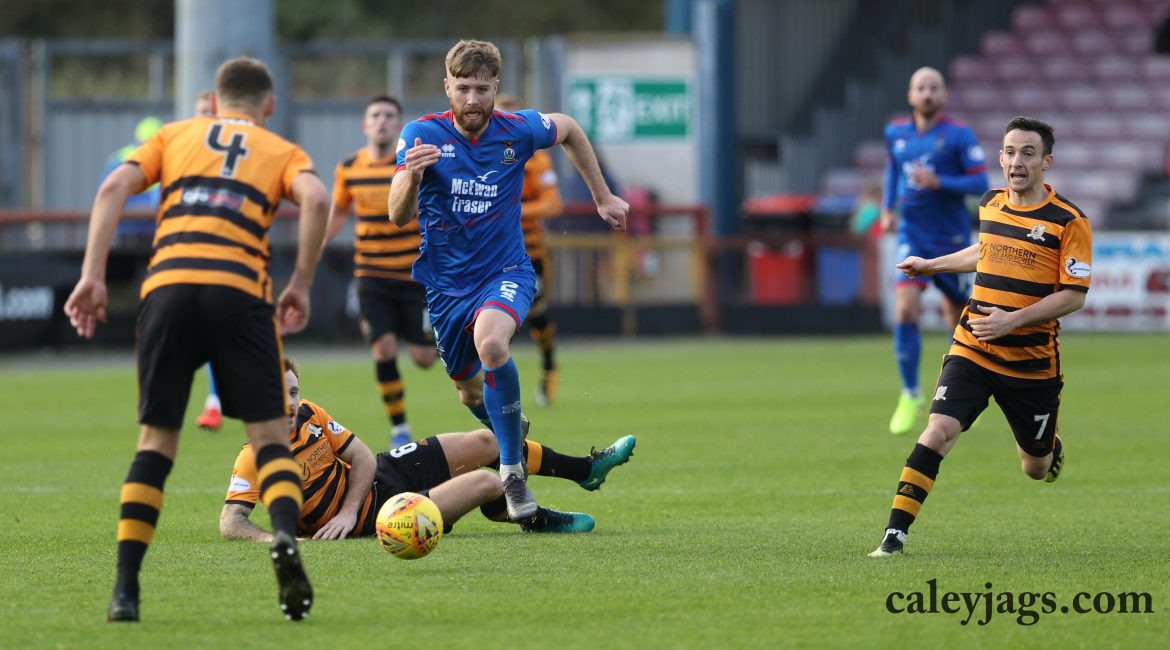 The Caley Jags came close to picking up the full three points against Alloa Athletic in the Ladbrokes Championship, grabbing a second goal at the 85th minute, but a last ditch attack by the visitors levelled proceedings just before the final whistle.

The draw maintained ICT’s firm record at home across all competitions, but it was a frustrating game for the home team. It finished 2-2.

It was a case of deja-vu as the two teams had been at the same ground at the same time only last week, but in the Challenge cup competition. There were five changes from the cup game by Robbo. Peter Grant made few adjustments in response, only removing Nathan Gilhooly and Iain Flannigan (suspended) from the starting line-up.

Before the match began, there was a minutes applause held for the late Hugh Crout, who was President of Caledonian FC during one of the most successful periods in the club’s history.

ICT were the first one to make it into the opposition box at the 4th minute of the game. Roddy MacGregor prodded an aerial ball to Jordan White on the right hand side, who hit a good cross across the box in search of Miles Storey, but was met by an Alloa body to clear. Only minutes later, Alloa would start their game well with a goal.

A nice passing move was capped off with a neat pass by Kevin Cawley and a side footed finish by Buchanan across goal; rooting Mark Ridgers to the spot and into the bottom right corner to open the scoring. It was against the run of play but suddenly the Caley Jags were on the back foot as they chased an equalising goal.

Storey took the game back to Alloa and almost created a goal at the first attempt. His cross was met by Roddy MacGregor, who dived and directed a header on target to MacDonald’s right, but was firmly saved by the shot stopper.

The Wasps knew they would have a tough game with little possession of the ball as ICTFC endeavoured to find their goal. The visitors defended deep, with a back line of seven at times, and it made it tough to break down in the first half but the boys in blue and red peppered the goal with chances.

At the 13th minute Aaron Doran received a high pass on the left hand side and cut infield to curl a shot on goal. It was on target, but didn’t have the requisite power to whistle past Jamie MacDonald. Carl Tremarco would have a pop a minute later, taking a touch well and keeping his effort low, but failed to get it on target.

As the first half reached its middle point, Jamie McCart tested McDonald’s concentration with an audacious long range drive from over 40 yards, but the ball didn’t dip down enough to hit the top corner – instead going over the bar.

Five minutes later, Jordan White tested MacDonald after leaping high to meet a cross. His flicked header floated on target but couldn’t beat him before half time.

The second half resumed as usual, with the hosts hoarding possession for long periods, but The Wasps managed to catch us out with some breaks on goal early into the half.

Five minutes in, Liam Buchanan had a pop at goal from 25 yards that just caught out Ridgers on his goal-line, he recovered and scrambled to tip the ball around the post for a corner.

Another five minutes later, Alloa used the same player combination for the first goal, but left with a different result. Cawley slipped in Liam Buchanan inside the box, who was turned away by a Caley Jags wall of players. After creating some space by cutting in, he tried bending it into the top corner but it didn’t dip down enough and hit the roof of the net on the way down.

ICTFC were determined to get their goal, and it wouldn’t be refused – it would be well worth the wait. At the 60th minute, Carl Tremarco took a corner from the far side which was not dealt with by the Alloa defence. The ball was prodded back to him and from a tight angle, he whipped it into the top corner and fired it off of the crossbar – on the postage stamp.

With some fresh substitutions, ICTFC started to get more of a foothold on the match. James Keatings immediately tried to create something after being subbed on, taking a speculative shot from 20 yards down the throat of Jamie MacDonald in the centre of goal.

The last ten minutes of the game was a madcap scramble for points as each abandoned their cautious approach from the early stages.

Caley pushed for one more to put them ahead and eventually it would arrive at the 85th minute. Miles Storey tried to cut inside and take a shot from the right but it was met by an Alloa leg and richoched back towards David Carson.

The midfielder immediately squared it wide to Carl Tremarco and he took a touch before swinging an excellent pass from the left into the middle. Jordan White couldn’t turn that down and he dived to direct the ball into the net from close.

Just as everyone in the home dugout had celebrated the second and seemingly winning goal, it would soon be answered in cruel fashion by the visitors. Alloa’s long throw from the right hand side was flicked on by Alan Trouten into the net, leaving little time for a response.

It almost came in stoppage time, with James Keatings leering at his target from the edge of the box with a free kick. The ball was well caught and it dipped down enough to give MacDonald a fright, but unlike Tremarco’s goal earlier on, it hit the wrong side of the crossbar and pinged away. Jordan White almost gobbled up a cross just after, with it going out for a corner.

ICTFC kept on going, launching long passes up the park to try and get a lucky chance, but none were going. The Caley Jags ended the game going one point closer with the pacesetters.