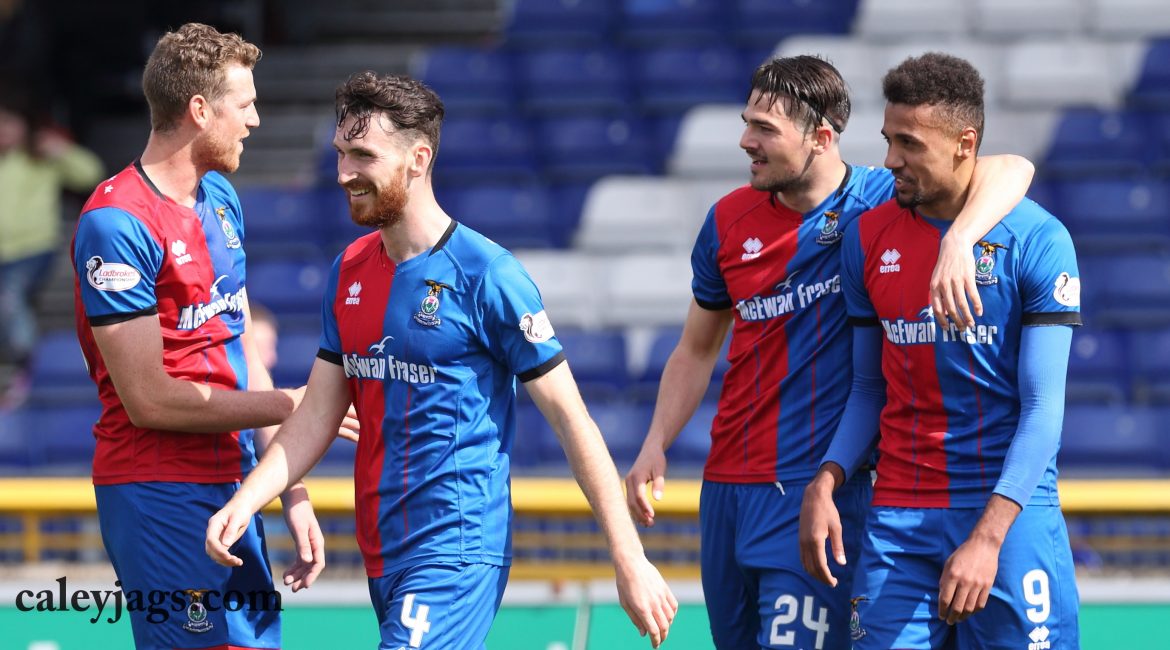 An opportunistic finish from Nathan Austin secured third place for ICTFC on the last league game of the season. It was the only goal of the game, and this victory, coupled with Ayr’s draw, guaranteed the Caley Jags the preferred home tie fixture in the second leg of the play-off quarter final against Ayr.

A combination of injuries and players rested allowed ICTFC to rotate fresh legs onto the pitch. White and Nathan Austin played up front in a 4-4-2/4-4-1-1, with McCauley and McHattie dovetailing down the left and Walsh playing down the right hand side alongside Shaun Rooney.

The Caley Jags had the largest share of the ball in the first half, but clear cut chances were elusive in the early stages.

At the 6th minute, Nathan Austin was squashed by Durnan near the corner flag. Joe Chalmers was on set-piece duty and duly whipped a curling ball to the back post. Somehow it slithered through a crowd of players and reached Rooney, but it caught him by surprise and he couldn’t react quick enough to create the shot.

Eight minutes later, Austin’s high press created an opportunity to rob former Caley Jag, Danny Devine on the edge of his box, but from a tight angle the striker couldn’t sneak it into the far post with his left foot, dragging it wide. Austin was there again to nod a back post cross from McCauley, but his nod was slipping wide of the mark.

Aberdeen’s loannee, Bruce Anderson, was looking lively for the Pars and he fashioned an unlikely chance from nothing at the 23rd minute. The striker athletically spinned his marker to receive a pass on the edge of the box, set himself onto his right foot and managed to get a shot on target, but it was hit softly and Ridgers could easily gather on his right hand side.

Austin’s pressure on the defence would eventually bare fruit in a predatory manner. Stuart Morrison’s passback was way too high and Cammy Gill could only try to chest it by jumping to take it down. His ball wasn’t trapped and Nathan Austin was there to pounce and easily slot it past him for the first goal of the game.

A tame James Craigen effort was the last response from the visitors in the first half; from 30 yards his low effort was easily stopped by Ridgers.

At half time, Jamie McCart came on for Coll Donaldson, with an eye on the play-off fixtures perhaps on John Robertson’s mind.

Kallum Higginbotham was one of Dunfermline’s more threatening players, and it was via his boot that the side managed to test Mark Ridgers’ reflexes in the early part of the second half.

A rebounded shot bounced towards the midfielder on the left hand side and he wrapped his foot around the ball, sweeping it towards the bottom right. It was struck well and was swerving on target, but Ridgers was able to dive to tip it around for a corner.

From then on, the game began to settle slightly and clear cut chances began to wane. Newly minted sub for Dunfermline, Andy Ryan, lashed at his chance from a tight angle at around the 75th minute mark. With a defender shielding the right hand side, he tried for the top left but cut across it and it flew wide of the mark.

Tom Walsh has always been a lively presence for the Caley Jags and he came inches from extending the lead for the home team. Darren McCauley flicked a pass in the box to Walsh and the winger cannoned his effort off of the post from 12 yards out on the left hand side.

Caley Thistle now face Ayr in the Premiership Play-offs, with them travelling to Somerset Park this Tuesday and the home leg being next Saturday. Tickets for the home fixture are available online now.