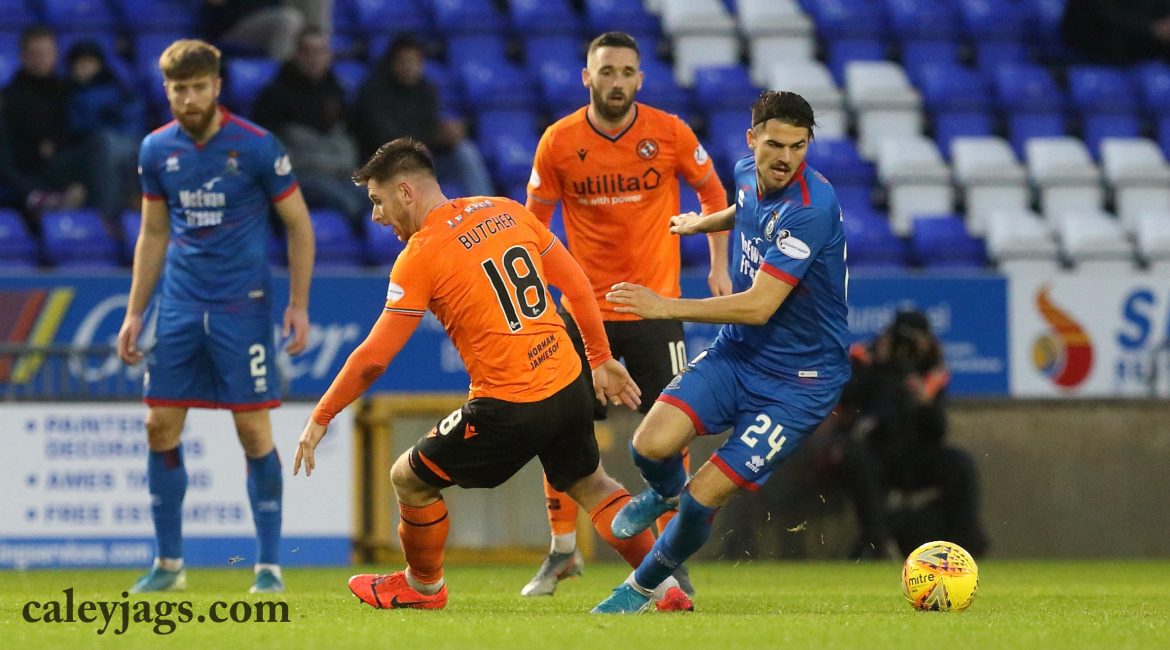 Dundee United secured a win at the Caledonian Stadium with a firm result away from home. It finished 0-3, courtesy of a Shaun Rooney own goal, a rising shot from Nicky Clark and a goal from the spot by Lawrence Shankland.

From Tuesday’s win at Palmerston, Robbo made two changes to the starting 11, with Jordan White returning to the number nine spot over Nikolay Todorov and James Keatings slotting in in exchange for Roddy MacGregor.

In the first ten minutes, each defence had to keep their wits about to block some goal-ward efforts; Nicky Clark first swivelled to shoot on his right, only for it to be blocked by Coll Donaldson’s leg. Three minutes later, the reverse would be seen as White dummied a Curry cross, only for Doran’s low effort to be blocked on goal.

Louis Appere would be the next to cut inside and attempt to shoot across goal for the visitors, but he blazed it high and wide. They would eventually need a significant amount of luck to get on the scoresheet, though, aided mainly by a touch from a home player.

At the 19th minute, Lawrence Shankland rode a tackle to tee up Paul McMullan on the right hand side. The winger took a touch before smashing a low cross across the face of goal. Shaun Rooney was there to meet it to clear the loose ball, but instead of it whistling away from the posts, it was tucked in between the post and crossbar and into his own net. One nil to the visitors.

The referee, Grant Irvine, had a big decision on his hands at the 30th minute. Lawrence Shankland collided with Jamie McCart near the technical area with his arm and left the defender on the deck. After some cooling down on both sides and some words between all parties, the referee only granted a warning, failing to see anything serious at play.

The same wouldn’t be said immediately after the stoppage, as Captain Carl Tremarco received a booking for a tackle close to the edge of the box for bringing down McMullan. Nicky Clark took the free-kick and aimed towards the back post, meeting Appere’s head – he tried curling it into the post but it just went wide.

ICTFC should’ve entered the tunnel all square with United. Aaron Doran managed to evade his man on the left hand side and trickle a shot through to Keatings in the middle, finally getting a sniff of goal. He lost his balance just before he hit it, but managed to still get a decent connection on target, only for it to be deflected out for a corner via Siegrist.

The second half was similarly close in the early stages. Ian Harkes dragged down White near kick-off, winning a freekick in a dangerous area. James Keatings’ dinked curling pass was met by White, forcing Siegrist into having a second go at collecting a slippery effort.

Moments later, Harkes tested Ridgers with a decent long range attempt which veered away at the last minute, but Mark made a smart save to tip it around the post.

Mark Ridgers was again kept alert as Appere played in Calum Butcher in on goal from the left hand side, with Ridgers smartly blocking low with his legs. It seemed like those two great saves would form the foundation for a comeback.

That almost came via a freekick barely 20 yards from goal. Keatings managed to get his freekick over the wall, but couldn’t get it to dip back down again enough; going over the bar.

Looking to his bench, John Robertson brought on Tom Walsh and Miles Storey to hopefully stretch play and open up new opportunities.

In the 71st minute, Walsh faced up his man before hanging a ball up for Keatings at the back post, but he couldn’t sneak in his downward header between the posts from a tight angle.

The Tangerines were up at the other end a minute later and would be clinical. Nicky Clark received the ball from Harkes in space just right off centre and smashed a shot into the net from an acute and close angle.

They twisted the needle to add a third from the spot at the 75th minute. Smith was judged to have been taken down in the box by Storey and Shankland sidefooted a shot into the opposite right corner, away from Ridgers. It was his 16th league goal of the season.

Smith almost added a 4th from close at an angle later into the game. The recently minted sub ran onto a ball going wide but failed to put it past Ridgers, who despite the three goals, was having a great game.

James Keatings would have the final attempt for the Caley Jags at the 86th minute, latching on to a loose high ball to get it on the half volley – but couldn’t sneak it inside the post.