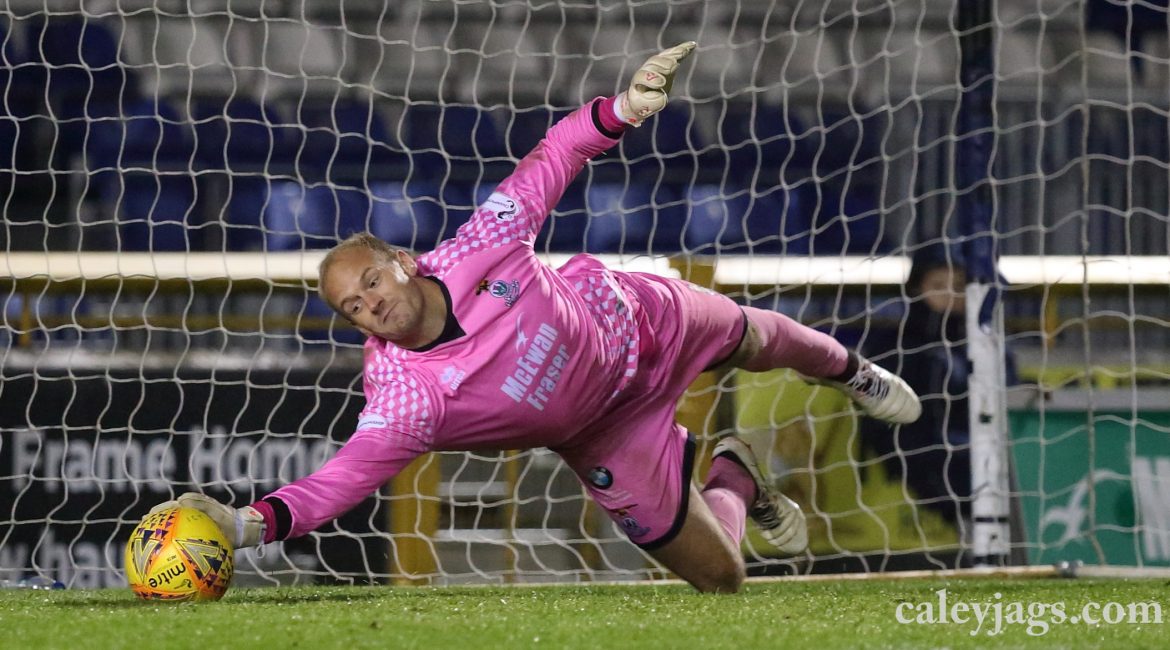 ICTFC earned their place in the Semi-finals of the Tunnock’s Caramel Wafer Challenge Cup, holding their nerves in a composed penalty shootout against Clyde.

The game finished 0-0, resulting in a perfect display from each of the Caley Jags takers from the spot – Ridgers also made the difference facing the visitors, making two crucial saves to get the win.

It was a bitterly cold night at the Caledonian Stadium, and the flu season had already picked up some casualties in the build up. Robbo and Scott Kellacher were out sick, so Barry Wilson, Ryan Esson and Charlie Christie were standing in for them in the dugout.

With that came four changes for the Caley Jags from the previous game. Keatings, Carson, Walsh and Todorov were replaced by Aaron Doran, James Vincent, Mitch Curry and Jordan White.

For the first 25 minutes of the game, ICTFC had the bulk of the half-chances, failing to capitalise but dominating the ball.

Facing his old team for the first time while wearing a Caley shirt, Jordan White was the taker for a freekick 20 yards out early into the half. Managing to do the difficult part by lifting it over the wall, he couldn’t force the ball to threaten Mitchell’s goal by dipping it back down.

White and Doran were able to get a shot off in the next ten minutes, both marginally missing the target by dragging their shots within the box.

Miles Storey from the right hand side created arguably the chance of the half for the Caley Jags. He cushioned a through ball to Curry in space further ahead, who from 18 yards aimed for the far corner but couldn’t find it; the ball glided inches off target.

At the 35th minute, Clyde pounced to knick a pass from Jamie McCart and set up Smith from a tight angle in the box. He drove the ball on target but Ridgers smartly blocked at his near post to deny a goal against play.

Just before the end of the first half, Doran had the last big chance having pounced on some slack defending from the visitors. A cross from the right evaded all players until it reached Doran at the back post, jinking inside and sneaking an evasive shot towards the post. David Mitchell covered the post to block.

For the bulk of the second half, Clyde took more of a hold of the game in response to a hooked Trafford half volley from a corner – his effort started dipping down just as it was over the bar, landing on the roof of the net.

Tony Wallace had two chances to open the scoreline from the 51st minute mark. Firstly digging out an effort on target, but an easy save for Mark Ridgers as it was aimed right at him. And then ten minutes later, skewing a shot wide from close after chesting a long throw down.

Following that there was a 20 minute barren spell for both teams, capped off with a great attempt from Chris McStay from range. His effort seemed destined for the top corner but Ridgers flew to agiley tip it around the post.

In the final two minutes of normal time, ICTFC could’ve broken down Clyde to save a nail-biting penalty shoot-out.

James Keatings spread a great ball wide left to Tremarco in acres of space. With Todorov bursting a lung to get to the front post, Carl’s low drive was met by a desperate Clyde leg to go out for a corner.

Miles Storey had a go from the opposite side having been played through from the wings and into the box. He tried smashing an attempt in at the near post but Mitchell closed his legs quick enough to keep it out. Up next was Todorov, who guided a cross from the left on target with a header, but it didn’t have enough power to prevent Mitchell from gathering.

Donaldson rose to meet a final corner and got it on target but Mitchell was again there to stop the shot, leading to the a shootout.

From there on out there was no doubt as to which team will win. Todorov drove the first shot down the middle and away from Mitchell. Tremarco, Donaldson and Keatings each placed their shots in the top corner, leaving Mitchell with little chance of a save.

Having almost kept out Raymond Grant’s penalty for Clyde, getting a fingertip on it, Mark would make no mistake as he first clawed away Wallace’s low shot to the right and then blocked McStay’s attempt with his legs.

It finished 4-2 and progressed ICTFC to the crucial semi-finals.