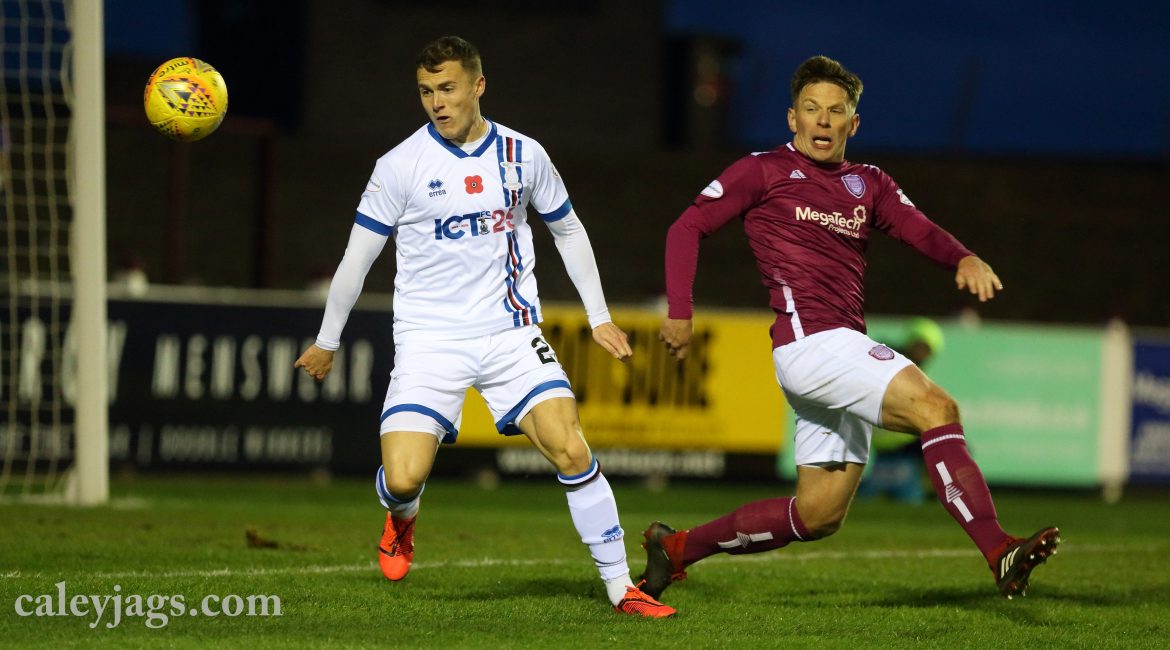 Caley Thistle were beaten 3-0 by Arbroath at Gayfield as goals from Scott Stewart, Bobby Linn and Omar Kader earned the Lichties all three points.

John Robertson was taking charge of his 200th game as Caley Thistle boss and he made four changes from last weekend defeat against Dundee United as Brad Mckay, Tom Walsh, Miles Storey and Nikolay Todorov came into the side for Shaun Rooney, Mitchell Curry, Aaron Doran and Jordan White.

Before the match began, there was a minutes silence which was impeccably observed for Remembrance Sunday.

Caley Thistle had the first chance of the match as James Keatings’ corner met Tremarco in the box and his header was blocked. The rebound founds its way to Donaldson but his shot was cleared off the line.

After 9 minutes on the clock, Caley Thistle had a chance through Donaldson as he met Walsh’s free-kick in the middle but his header was over.

After 19 minutes, Mark Ridgers was called into action as he saved Scott Stewart’s effort with his feet.

The Lichties had the breakthrough after 28 minutes on the clock, after a great move from the home side, Scott Stewart fired a low strike past Ridgers from inside the box.

Caley Thistle looked to hit back immediately as Miles Storey looked to meet Brad Mckay’s long pass but Gaston came off his line to clear it.

After 34 minutes, Todorov saw his close range header saved by Gaston after he met Carl Tremarco’s cross in the middle.

Just before the break, Bobby Linn’s corner broke to Donnelly and the Arbroath front man had a go from the edge of the box, which went narrowly wide.

In the second-half, Tom Walsh had a go from about 25yards after the re-start but Gaston parried it clear.

Arbroath were then awarded a penalty kick after 53 minutes, Brad Mckay was judged to have pulled down Colin Hamilton in the box.

Bobby Linn stepped up to cover the penalty to double the home sides advantage.

Caley Thistle appealed for a penalty of their own as Jamie McCart went down in the box but nothing was given by the referee.

John Robertson made two changes as Mitch Curry and Jordan White replaced Nikolay Todorov and James Keatings. While Dick Campbell also made to changes as Bobby Linn and Luke Donnelly were replaced by Steven Doris and Omar Kader.

After 71 minutes, Doris almost made an immediate impact as he fired a shot right across the the post.

After 76 minutes, Ridgers denied Whatley as he held the Arbroath midfielders’ deflected effort.

After 86 minutes, Arbroath had their third of the match as Omar Kader tapped in at the back-post to seal all three points.

Caley Thistle are now in Challenge Cup action next weekend as the take on Clyde at the Caledonian Stadium.