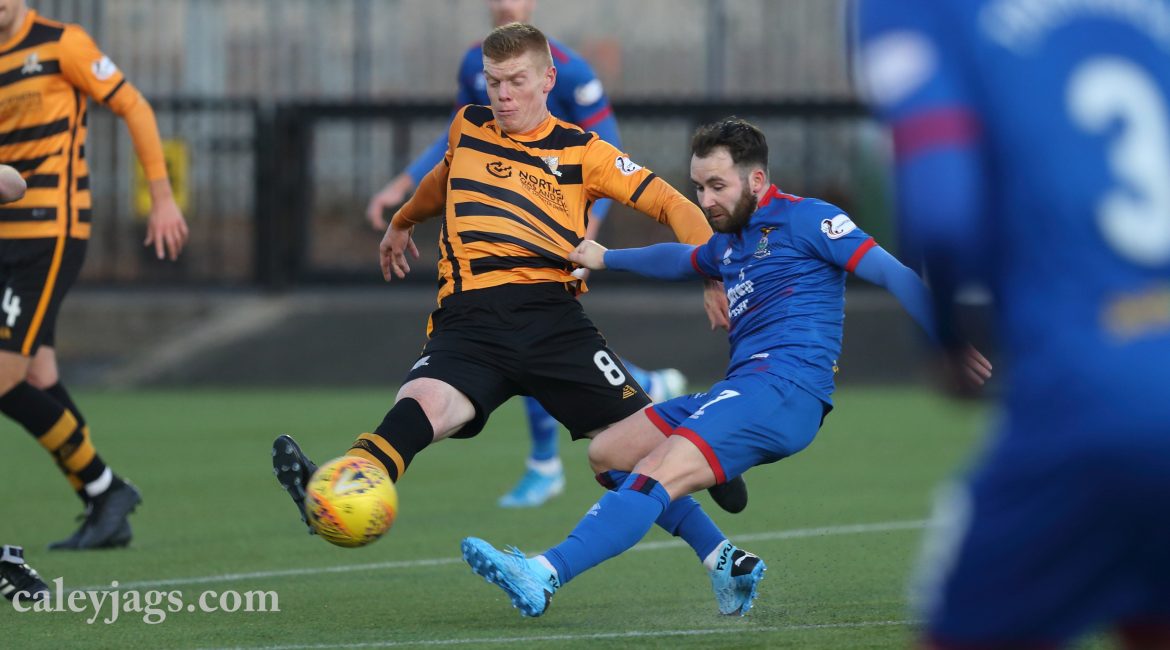 Caley Thistle moved up to second place in the Championship table thanks to a 2-0 win at Recreation Park against Alloa. An Own Goal from Scott Taggart and a stunning strike from Aaron Doran sealed all three points.

John Robertson made two changes to the side that beat Dundee last weekend as Shaun Rooney and James Keatings replaced Brad Mckay and Kevin McHattie.

Shaun Rooney went close for the Caley Jags in the opening minutes as his cross went past the face of goal and narrowly behind.

Alan Trouten was then presented with a big chance to put Alloa ahead just a minute later but he turned his shot past the post.

Caley Thistle had a big chance to open the scoring after 14 minutes as James Keatings spotted Carl Tremarco in the middle of the box but his header went wide of the post as he couldn’t fully connect with it.

Keatings was the provider four minutes later as he spotted Doran free on the edge of the box from a corner but the Irishman’s effort was deflected into the gloves of MacDonald.

Mark Ridgers produced a fine save as he was called into action after 26 minutes, he tipped Flannigan’s effort from about 20 yards over the bar to keep the game level.

The Caley Thistle keep was called into action just 9 minutes later as he produced another massive save. Alan Trouten broke into the box but somehow saw his effort kept out from the Caley Thistle number one.

The Caley Jags got the breakthrough after 37 minutes, it was in a fortunate fashion as David Carson saw his long pass, which was aimed for Tremarco, headed by Scott Taggart past his own goalkeeper!

Caley Thistle then had another just before the break, Shaun Rooney saw his cross knocked down by Jordan White into the path of Aaron Doran, who volleyed it into the top corner to make it 2-0.

In the second-half, Miles Storey had a go from about 25 yards but his effort was over the bar.

Alloa were then down to ten men after 58 minutes, Liam Dick was sent off after a strong tackle on James Keatings.

With twenty minutes to go, Kevin Cawley was presented with a big chance for the home side as he was found free in the box but he headed over the bar.

Kevin O’Hara then almost found the net for Alloa as his effort from a tight angle come off the post.

Aaron Doran went close to adding a third as some space opened up for him after 75 minutes but he dragged his effort wide.

Caley Thistle’s final change was made after 76 minutes as Jamie McCart was replaced by Kevin McHattie.

MacGregor almost added a third late on, the substitute fired a shot from the edge of the box but saw his effort saved by MacDonald.

The Caley Jags secured all three points and they will now turn their focus to next weekend as they face Ayr at the Caledonian Stadium.