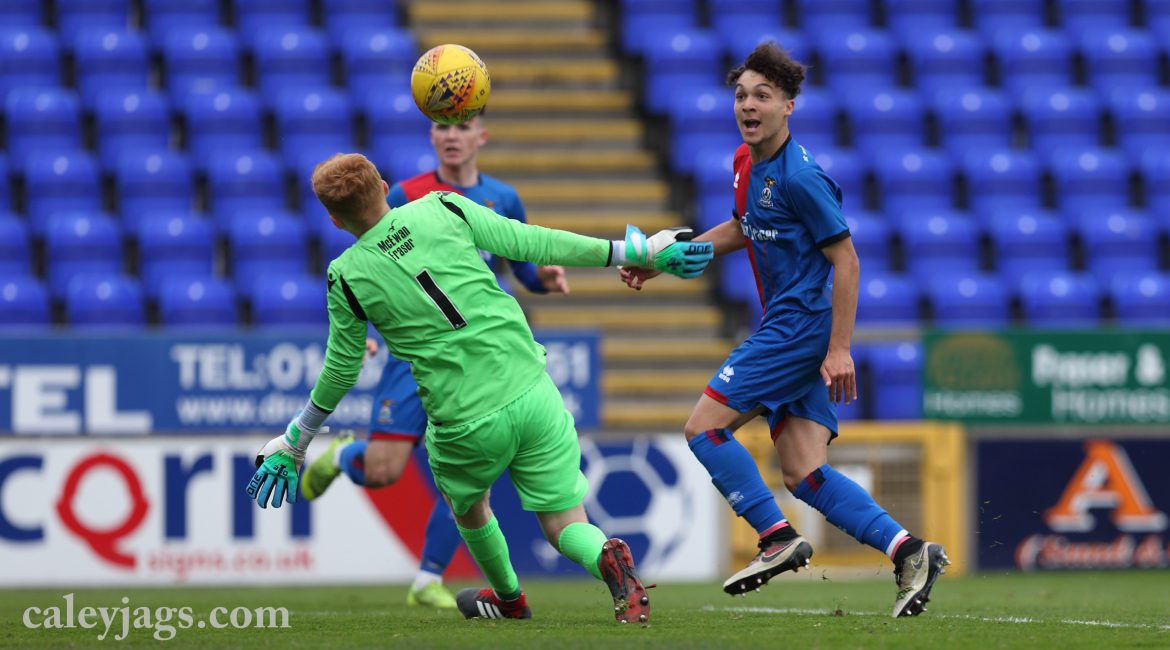 Caley Thistle Under 18s secured the Under 18s Progressive Tier title in style as they beat Ross County 4-0 at the Caledonian Stadium thanks to a brace from Roddy MacGregor and goals from Donald Morrison and Matheus Machado.

The first chance of the match fell to Matheus Machado as he shot from around 20 yards but his effort was saved by Dixon-Hodge.

Jack Brown then fed in Ross Gunn on the edge of the box but the winger fired his effort wide of the post.

Cameron Harper looked to open the scoring with a free-kick from about 25 yards but the left-back’s effort was narrowly wide of the post.

Just after the half-hour mark, Machado went close as Jack Brown’s corner found its way to him and his shot was inches wide.

Machado caused more trouble down the left-hand side as he cut inside and shot but his effort was palmed away by Dixon-Hodge.

Caley Thistle eventually took the lead on the 43rd minute as Machdo unleashed a powerful effort which hit the crossbar and the rebound fell to Donald Morrison who prodded it home to make it 1-0 to the Caley Jags.

It was 2-0 just a minute later as some good play by Machado found Roddy Kennedy in the box and he cut it back to Roddy MacGregor and his low finish beat Dixon-Hodge.

The Caley Jags started the second-half on the front foot as it could’ve been 3-0 just two minutes into the half as Ross Gunn’s cross just missed Roddy Kennedy in the middle and Jack Brown could only turn his effort just wide.

Donald Morrison produced a fine cross down the right hand side after a brilliant run as he found Machado in the middle but his effort was deflected behind for a corner.

Roddy Kennedy fired one just over the bar on the 61st minute as he was played in by Lewis Hyde.

ICTFC then made a double change as Shane Harkness and Gabriel Hastings replaced Lewis Hyde and Roddy Kennedy.

They Caley Jags made it 3-0 shortly after as Cameron Harper’s floated in free-kick was played across the box by Machado to find Roddy MacGregor for a tap-in.

Millar Gamble and Fraser Russell then replaced Ross Gunn and Ryan Fyffe for the closing stages. Millar would go to play alongside Harry Nicolson at centre-back, with Fraser playing wide.

The win was sealed on the 83rd minute as Shane Harkness found Matheus Machado in the box and the winger took it past the Ross County defender and chipped the ball over the Ross County keeper.

Congratulations to the lads on a fantastic title win!