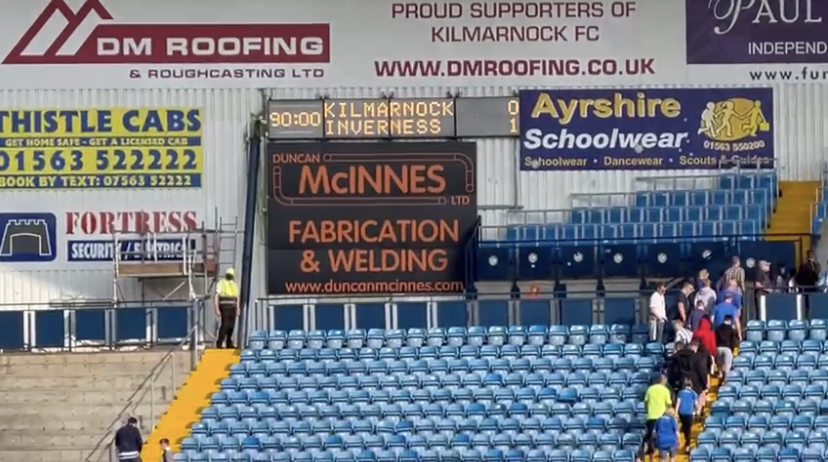 Caley Thistle continued their perfect start to the league campaign with a fourth consecutive win, as they beat Kilmarnock at Rugby Park. Michael Gardyne’s early goal was the difference between the sides as he scored his first goal for the club.

Both sides arrived having won all three opening games, with either side yet to concede a goal before kick-off. Meaning a win for either team would put them three points clear at the top of the table. Billy Dodds went with an unchanged side from last weekend’s win at home to Ayr United with Kirk Broadfoot captaining the Highlanders against his former side.

Tommy Wright also started the same Kilmarnock side that won against Hamilton in their previous fixture, starting former player Liam Polworth, playing against Caley Thistle for the first time in his career.

Before kick-off, there was a minute’s applause for those who have died in the pandemic and for the NHS and key workers for their hard work.

In the 4th minute, Michael Gardyne opened the scoring with a powerful strike from close range. Great play between himself and Shane Sutherland down the left side of the pitch gave Gardyne an opportunity from a tight angle inside the box which he fired into the roof of the net, giving Zach Hemming no chance to react from such short range.

Former Caley Jag Liam Polworth had a great opportunity to level the scoring when the ball was played through to him in the box, but his low effort was held by Ridgers. Kilmarnock had another chance to get level soon after through Blair Alston, when his deflected shot was excellently saved onto the post by Ridgers.

At the 26th minute, a lofted ball over the top to Manny Duku was held up well by the Dutchman who then found Roddy MacGregor, creating a chance for himself with great bit of skill before he fired his shot over the bar.

Inverness had a chance to double their lead via a counter attack where Sutherland had space to run through the middle where he shot from distance but his effort was wide of the post.

Kilmarnock looked to even the score before half time when Polworth again had a chance to score against his former club after a scramble in the box but his effort was blocked and the ball was cleared from the danger zone.

Just before the break, Manny Duku was brought down by Chris Burke in the middle of the pitch. From the resulting free kick, Roddy MacGregor found Danny Devine in the box who managed to hit the target but his effort was held by Hemming which was the last action of the first half.

Inverness had the first chance of the second half when Tom Walsh’s cross was flicked on by Manny Duku towards MacGregor who’s effort was blocked by the Kilmarnock defender.

Kilmarnock’s biggest chance of the game came in the 67th minute from an Innes Cameron goal bound shot which was excellently cleared away for a corner, with another chance coming for the home side minutes later when Chris Burke crossed the ball into Jason Naismith but his header was too high.

After winning the ball at the half way line, Scott Allardice floated the ball over the top which found Sutherland who held the ball up brilliantly before he teed up substitute Aaron Doran who tried to find the top right corner but his effort was just wide.

Moments later, MacGregor found Carson who did well to run down the right before having a shot on target which was saved and put out for a corner by Hemming.

Inverness tried to finish off the game by doubling their lead through Sean Welsh in the 82nd minute, who intercepted a poor Kilmarnock pass before putting Sutherland through on goal where he tried to chip Zach Hemming off his line but his effort was over the bar. Caley Thistle’s final chance of the game came from a long distance shot by Scott Allardice that went over the bar.

The team was solid in defence throughout the whole game and the result meant that Mark Ridgers kept his 60th clean sheet for the club and Inverness sit top of the Cinch Scottish Championship going into the Challenge Cup.

Next up is a Buckie Thistle at home in the Challenge Cup. ICTFC’s next league game is at home to Partick Thistle on Saturday 11th September.