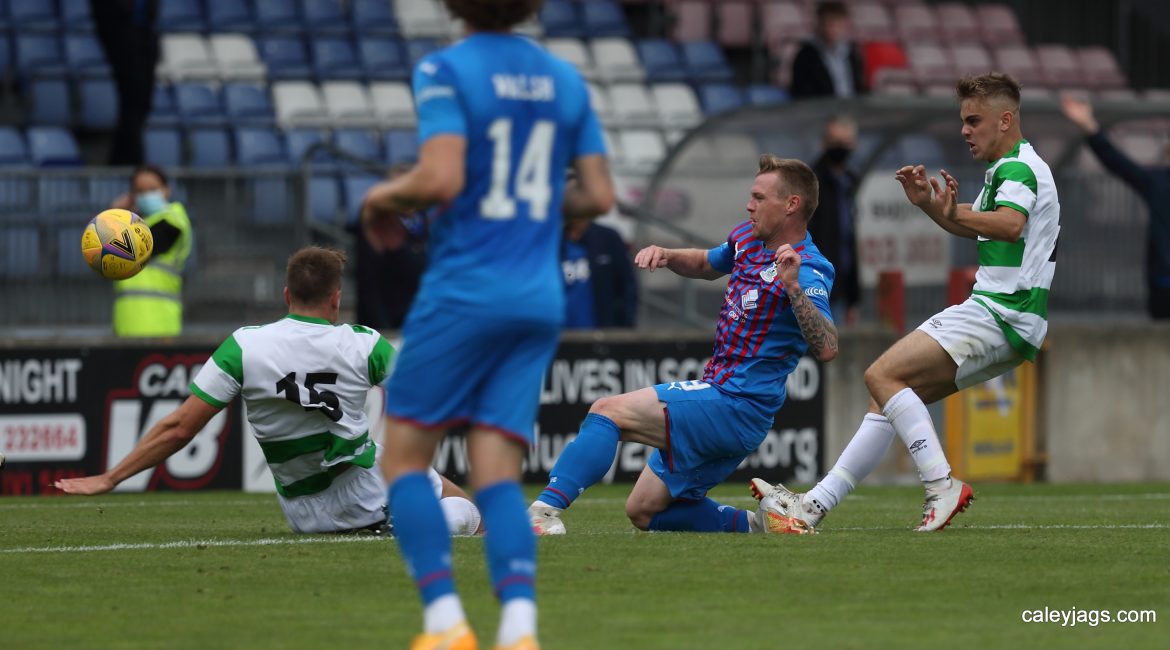 It was a game of many firsts as ICTFC dispatched Buckie Thistle at home in the SPFL Trust Trophy. Lewis Jamieson opened the scoring with his first goal for the club during his first start for the team. Cameron Harper and Billy Mckay notched their first goals of the season in the second half, with a first competitive goal for the former. Mckay bookended the match with his brace to add some extra padding to the scoreline. The game finished 4-0.

In the buildup to the game, Billy Dodds signalled his intention to use the fixture as a chance to give many players with limited minutes a chance to impress. That desire was fulfilled as the gaffer made 10 changes to the starting lineup from the previous away win at Kilmarnock FC. Youngsters Lewis Hyde, Anthony McDonald and St Mirren loanee Lewis Jamieson hoped to impress with their first starts of the season.

Buckie Thistle arrived with a very strong lineup, only making one enforced change to the first team due to the suspension of Sam Morrison, who was replaced by Lewis Mackinnon in defence.

Despite not having much of the ball in the early stages, it was the away side that was the first to test the keeper with a series of great chances at the 4th minute. Andrew MacAskill prodded a ball down the left channel for Kevin Fraser to chase against Wallace Duffy, and from close range he managed to dig out a sidefooted shot that was palmed away by Cammy MacKay. MacAskill was on hand to pick up the loose ball just outside the box and his whipped ball towards the top corner kissed the corner of the crossbar and away.

ICTFC had their response to the visitors with a key chance of their own from close range. Aaron Doran dropped into space 25 yards from goal and clipped a delicious looping ball over the shoulders of the defence; Anthony McDonald latched on for a one on one chance against the keeper. With the ball rolling right to left across goal, McDonald tried to slip a left footed shot back towards the opposite far corner but the angle was against him – Main’s foot kept the ball out.

Chances kept on coming as the visitors continued to test MacKay’s goal. The Jags’ Sam Urquhart did well to connect to Kyle MacLeod’s cross with a diving header but was again thwarted from close range by a big Cammy Mackay in goal. At the other end of the pitch, Anthony McDonald cut onto his left foot from the wings and tried to caress a shot into the far side netting but couldn’t quite get the ball to bend back towards goal.

The Caley Jags would grab their opening goal from a set piece at the 23rd minute. Aaron Doran’s deep cross from the right channel towards the back post was met by debutant Jamieson in the air, who managed to squeeze a header from a tight angle past the near post. A welcome reward for the energetic striker’s hard work prior to the goal.

Lewis Jamieson almost saw double seven minutes later as he slipped past a defender with a one two from McDonald and cut onto his left foot to unleash a strike, with his attempt taking a knick off a leg and cannoning off the crossbar.

Despite the chances starting to fall in favour of the hosts, Buckie Thistle almost answered the opening goal with a great chance from Kevin Fraser. The midfielder let a throw in from the near side roll across his body and tried to sweep a shot towards goal through a crowd on his left peg. If a player was able to connect with cross-cum-shot, it would have put MacKay in danger but it instead harmlessly went out of play.

Just before the break, ICT’s Sean Welsh was able to test the keeper from close range after making a rare run into the box on the shoulder of the defence. The midfielder latched onto a clipped ball on his right hand side and stretched to prod a shot on target, which was just about stopped by Kevin Main.

Tom Walsh was subbed on in place of Anthony MacDonald at the 63rd minute and the winger immediately contributed to ICT’s second goal of the game moments later. Walsh made a smart bending run behind the defence that cut Main off from a through ball and Cameron Harper was on hand to collect the scraps and dink a delicate chip over the last defender into an empty goal. It was the first goal of the season and the first competitive goal for the young fullback.

Billy Mckay’s hard work would pay off as he would add the game’s third goal with almost ten minutes left of normal time. The striker took advantage of a slack pass from Mark McLauchlin near the right hand corner of the pitch. And despite looking up to see where his strike partner was in the box, he snuck a cheeky shot past Main from close range at the near post. It was his first goal for ICT since returning for his third spell.

With the dying seconds of the match ticking down, the Northern Irishman notched his brace from within the six yard box. Jamieson, Mckay and Walsh knocked the ball around the box, eventually resulting in Mckay unleashing Jamieson into the box and the young attacker squeezed a square ball into the mixer to return the favour. Billy stuck a leg out and just about managed to poke the ball past the keeper to finish the game.

ICTFC will next welcome the visit of Patrick Thistle FC on Saturday 11th in another top of the table clash.