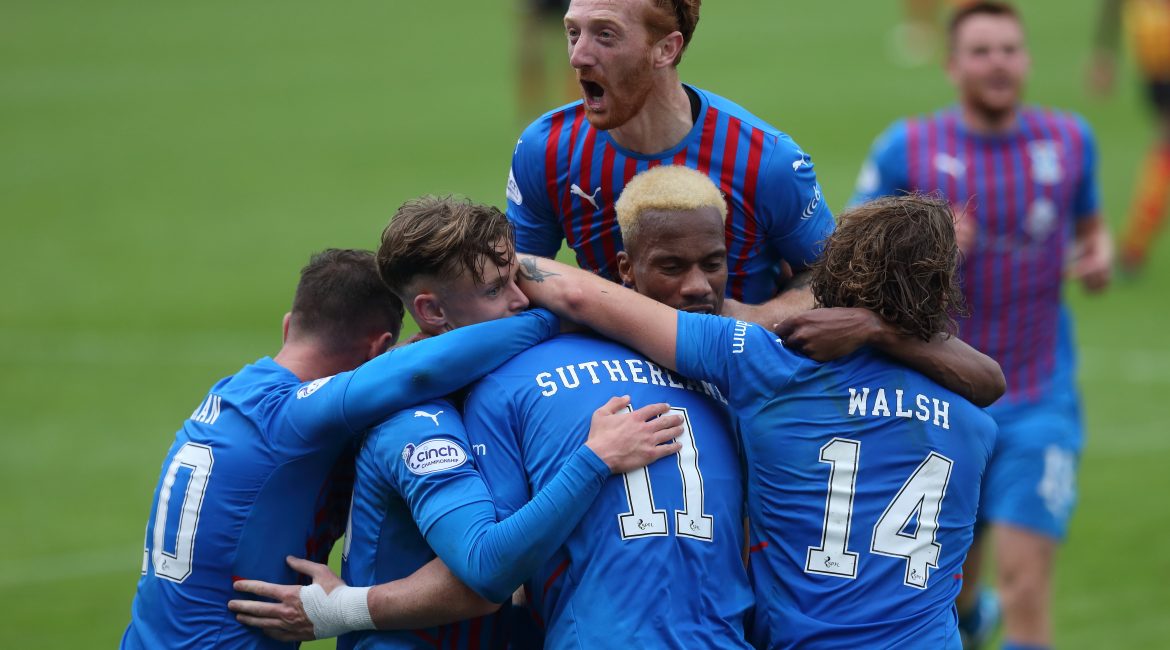 ICTFC kept their 100% start to the league season intact with a 3-1 win at home against Patrick Thistle FC. Scott Tiffoney was the sole goal in the first half as the visitors grabbed the early lead, but the Glasgow side couldn’t answer three consecutive goals in the second period, capped off by a brilliant first time finish by Aaron Doran into the top corner. This result keeps the Caley Jags three points clear at the top of the Championship.

Billy Dodds welcomed the visitors with a largely unchanged team from their Championship win at Kilmarnock, only swapping out Michael Gardyne for Aaron Doran on the wings due to a slight knock. Roddy MacGregor also started the game, hot on the back of signing a new contract committing him to the Highlands until summer 2024. Patrick Thistle made two changes to their domestic lineup, bringing on Cammy Smith and Lewis Mayo in place of Shea Gordon and Zak Rudden.

The early stages of the game began cagey as the two sides tried to suss each other out. Tom Walsh’s clipped cross from the right flank at the 9th minute almost found Manny Duku in space but it was a tad too high for Duku to direct back towards goal; flicking off his head and out.

Scott Tiffoney opened the scoring for the visitors seven minutes later, ending ICT’s clean sheet streak with the first real test of either keeper in the game. The winger received the ball on the counter from a broken up play by Stuart Bannigan. Tiffoney drove down the flank before cutting inside to dummy a shot before firing low past Ridgers’ right hand side from around the edge of the box.

That goal seemed to bring the game to life as Duku came millimetres from answering the shock opener shortly afterwards. The Dutchman rose highest to flick an in-swinging cross from the left hand side that Jamie Sneddon just about tipped onto the underside of the crossbar.

Patrick Thistle had a great chance to double the lead at the 36th minute, as Turner’s shot somehow rolled to Brian Graham in the box. The big striker opened up his body and couldn’t slot the ball past Ridgers’s right from around 8 yards.

Perhaps out of frustration, Scott Allardice tried to leather the ball from range after picking up a loose ball from around 25 yards, but his effort went over the Patrick Thistle bar.

Just before the break, David Carson squeezed a final chance from a cross from the right flank that landed at the feet of Kirk Broadfoot surrounded by bodies in the box. The defender’s first touch took it under control but he got tangled up with his legs and couldn’t force a shot, which eventually got cleared from danger.

ICT came out of the break the better side as they tried to force the question on Patrick Thistle. And the equaliser would come from an unlikely source. Atoning for his missed chance in the first half, Kirk Broadfoot drove into space unchallenged in the right hand half-space and as he krept closer the shot seemed to be on from range. The defender took a touch to settle himself and hit an effort that crept across goal and inside the far post.

The second goal for ICTFC came via Sutherland’s dogged determination. Shane Sutherland chased down a long percentage ball down the flanks which looked to be cut out by a rushing Sneddon off his line. Somehow the keeper misjudged the bounce with it sailing over his head; Sutherland rounded the shot stopper and just had to tap it into an empty net.

Partick Thistle subbed on Zak Rudden and Jake Hastie to try to stem the tide in response but ICT added the gloss to the score only a minute later after the second. With momentum clearly swinging towards the hosts, David Carson bombed forward and his cutback cross from the right hand flank was dummied by Duku with a cheeky hop, and Doran finished with a first time shot into the top corner from the edge of the box.

Substitute Reece McAlear almost created a four goal with minutes left of normal time. The midfielder was given the time to look up and cut back a pass to Doran free in the box, who swept his sidefooted shot well wide of the target going right to left.

ICTFC next face Dunfermline Athletic FC on the road before they’re back at the Caledonian Stadium on September 25th to play Queen of the South FC.