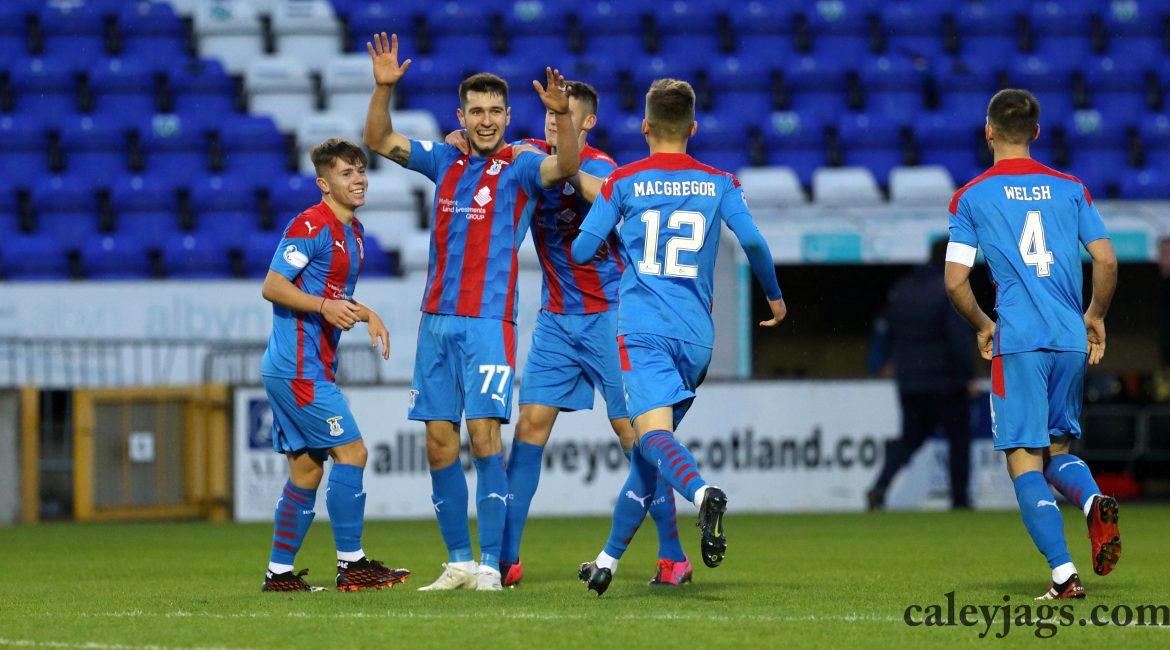 An early goal from Arbroath FC seemed to be the only major scare for ICTFC on a spooky Saturday game at the Caledonian stadium on Halloween.

In the second half, the Caley Jags put three goals past the visitors with no response to earn their first three points of the league season.

Daniel Mackay prodded home shortly after the restart, Scott Allardice fired home from range and Nikolay Todorov swept an effort into an empty goal for a comfortable win in very difficult conditions.

Kai Kennedy made his first start for ICT’s first 11, and Sean Welsh was the only other change to the starting line-up. Daniel Devine and James Keatings dropped to the bench, joined by captain Aaron Doran who made his first appearance in the squad having recovered from an injury layoff.

Throughout the game, weather would play a testing role due to the blustery conditions being whipped up in the Highlands. It took eight minutes for both teams to adjust and try a shot at goal.

Abroath’s Connor Smith won a foul from Robbie Deas 35 yards from goal in the middle but ICT’s wall stood firm to block Bobby Linn’s effort to then clear. Four minutes later, Connor Smith saw space open up down the right hand side for Arbroath and tried to test Mark Ridgers from outside of the box, but dragged it well wide of the target.

With loads of space in front of him, Sean Welsh managed to ping an excellent pass up the park for Nikolay Todorov to flick on for a quick attack in response, but with the ball cleared back to him, the Bulgarian was ruled to have handled the ball in his attempt to pass to Daniel Mackay in space.

ICT had a lot of the ball in the early stages and tried to pick the lock by moving the defence around, but it was Arbroath that broke quickly to score the first goal against the run of play at the 23rd minute.

Todorov tried holding up the ball to play in a teammate in Arbroath’s half, but a combination of the elements and a Arbroath clearance seemed to hit a floating ball to Bobby Linn down the left hand side in acres of space.

The winger broke past the first tackle into the box and squared it for Kris Doolan to slide in at the back post for a finish. Connor Smith later latched onto another pass in space, set loose Doolan on the left of the pitch but looking for options, the striker dragged his pass well wide, which rolled out for a goal kick.

With the wind largely going from left to right towards Mark Ridgers’ goal, the hosts were victim to the brunt of challenging aerial balls. But Arbroath almost fell victim as conditions started to sway the opposite direction. Thomas O’Brien’s clearance outside of his box looped behind him and thankfully didn’t give goalkeeper Derek Gaston much trouble as it landed in his arms.

ICT wouldn’t score in the first half, but Kai Kennedy almost set up Daniel MacKay in space with an excellent outside of the foot pass from the left hand side, but O’Brien slid across to clear.

With those frustrations in front of goal going into the break, it took less than a minute into the second half for the hosts to answer the Red Lichties.

Build up down the left hand side led to Cameron Harper quickly winning ICT a corner with a great pass to the back post that was nodded away.

Kai Kennedy took the corner quickly and Wallace Duffy flicked on Welsh’s cross for Daniel Mackay to head home at the post.

Arbroath had a chance to immediately add to the score line with a direct freekick but Connor Smith’s attempt didn’t dip back under the crossbar having cleared the wall.

Kai Kennedy constantly threatened on the ball as he dipped and ducked past tackles during the game. The young loanee almost found a blue and red shirt as he cut inside from the right flank and whipped a ball on his left peg but it latently bent too much towards the keeper for him to claim.

The goal that finally put ICT in the lead for the first time in the game was a spectacular effort from another Summer signing.

Roddy MacGregor was set up on the left flank by Scott Allardice, and cut inside to repay the favour by squaring back to the midfielder in space. The player took a touch and let rip a corker from about 30 yards into the top right hand corner – a first in Caley Jag colours in the Championship.

Emboldened by his first goal, Allardice threatened to do the same again two minutes later, checking back to Welsh after shaping to shoot, and then committing to a long range effort, forcing Gaston into a low save with the ball just close enough to worry the keeper.

From the corner, Welsh’s cross was met by Roddy at the back post, who set himself with a touch but dragged his half-volley low and wide of the mark from a tight angle.

The hosts felt that that there was a chance top score form the spot at the 75th minute. Sean Welsh’s long ball seemed to be on its way to Dan Mackay on the shoulder but the young winger went to ground as he was seemingly barged off the ball. The ref had a clear view of the incident but didn’t think there was enough contact to merit a penalty call.

It wouldn’t be long for the Highlanders to add a reassuring third to widen the gap at the 77th minute, two minutes later.

As a ball floated into the box, Gaston was left in no-man’s land as he tried to go off his line to claim the pass but was beaten by an opposing shirt. Roddy MacGregor took control of the ball and shielded it with his back to goal to prod back to Todorov. The Bulgarian had the easy job to finish into a relatively empty net, notching his third goal in three Championship games.

The visitors were limited to one last half chance before the end of the game. Seeing the pitch starting to open up in front of him, Arboath’s defender Thomas O’Brien bombed up the pitch with the ball, cut onto his right leg and shot from range. Normally it wouldn’t trouble Ridgers, but the wind caught it enough for the keeper to require two cracks at stopping it.