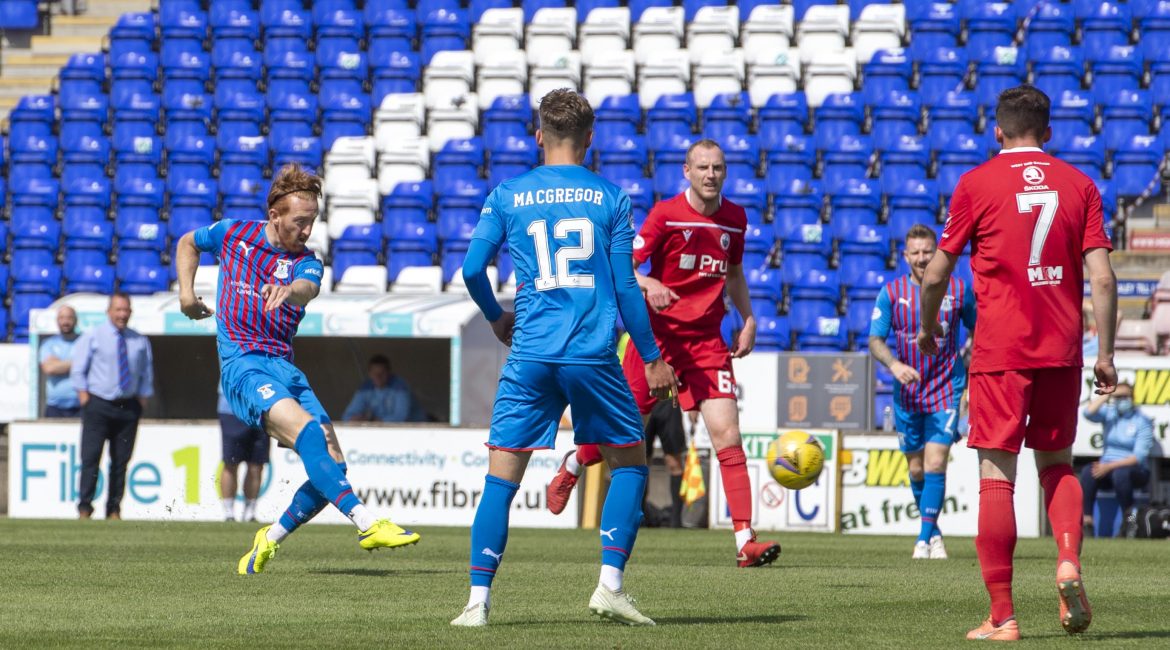 ICTFC fought back from being two goals down to level it up 2-2 at home against Stirling Albion. Roddy MacGregor and Shane Sutherland both tucked in neat finishes into the corner either side of halftime, courtesy of some smart linkup play from Manny Duku.

The hosts had the bulk of the chances to grab the full three points in the second half but they couldn’t get the winner before the final whistle. Kevin Rutkiewicz’s side won the shootout 3-2 to earn an extra point.

The Caley Jags sat second in the Group A table with one goal separating them from the visitors, having each played a game each so far.

The visitors took the lead early into the game via a set piece.

Rabin Omar won a direct freekick from around 20 yards after ICTFC half-cleared a near side corner out of their box. Striker Dylan Mackin stepped up to take and scored off the underside of the crossbar on the right side of the goal, leaving Cammy Mackay helpless to save.

The Caley Jags tried to rally and respond in kind with a series of probes against the Binos’ backline.

Cameron Harper found Shane Sutherland on the edge of the box with a smart low cutback from a corner at the 8th minute, but the attacker couldn’t squeeze his left footed shot on target with defenders closing down his angles. The attacker would almost be the provider shortly afterwards as he did well to take down a bouncing ball, turn and find Tom Walsh on his right peg in space. The tricky winger shifted onto his left leg and almost found the near bottom corner with a curling shot; just curling wide from the post.

Another pop at goal would come at the 16th minute, as David Carson collected a ball from a cleared corner and tested Currie with a low drive on target but the keeper got down to save. A moment later, Walsh recovered a ball going out of play on the far side, dummied to force the ball on his left while on the swivel and Duku almost glanced the in-swinging cross on target, but couldn’t get enough of it to direct it where he wanted.

Despite positive signs from the home team, the visitors extended their lead via a very fortunate deflection at the 19th minute. Nathan Flanagan swept in a teasing cross from left to right from the near side that evaded Mackin but found Kieran Moore at the back post. The player’s first attempt was smartly blocked by Mackay who made himself big, but it cannoned back off the attacker and landed in the net; 2-0.

The cushion wouldn’t last though.

The inevitable response would come from the Caley Jags at the 26th minute through decisive buildup though the middle of the park. Roddy MacGregor collected a pass from Sutherland and then had a 1-2 with Duku that put the young midfielder through on goal. MacGregor gave the keeper the eyes and prodded a low shot into the bottom right corner away from the shot stopper.

Referee Alan Newlands wouldn’t end the half without an important call to make, after Duku was played into the box by a clipped through ball from Tom Walsh. Just as the striker collected the ball and shaped to shoot, he appeared to be brought down by a trailing leg from a defender in the box. The referee did not see enough to point to the spot and allowed play to go on.

Carrying on the momentum, ICTFC started the second half brightly with two consecutive moves up the park, with the latter move resulting in a shot off target from Manny Duku at an acute angle.

The equaliser arrived shortly afterwards as Duku became provider in a similar fashion to the first goal. Shane Sutherland found Duku with his back to goal on the edge of the box and while holding off his man, the Dutchman backheeled a tantalising ball for Sutherland to slip first time into the bottom right corner.

New substitute Robbie Deas almost picked out the perfect pass for Tom Walsh to get a decisive third, playing the winger through with a lofted ball from his own half. Just as it looked like Tom would take it under control, the bounce seemed to put the chance out of reach and forced the winger to bring the ball wide of the goal, which was dealt with.

The visitors were still trying to get back on top in the game and tested the Highlanders’ resolve with a half chance at the 55th minute. Midfielder Jack Leitch controlled a loose ball around the 25 yard mark and clipped a speculative effort bending left to right off the corner of the far post and away.

Luck wouldn’t extend the other way from a set piece situation for the home team ten minutes later. Shane Sutherland won a freekick from a promising position near the right hand edge of the box. Cameron Harper stepped up to take and to his credit clipped it up and over the wall with little wiggle room, but his effort whistled just wide of the right hand post, rooting Currie to the spot.

As the last minutes of normal time were running down, the visitors were denied the three points in the box via a fantastic save. Jack Leitch’s cross from the near flank was met by Rabin Omar on the volley from around eight yards and Cammy Mackay needed all of his wrist strength to firmly stop the shot and parry it out of danger.

Recent substitute Reece McAlear almost pulled off a cracker before the final whistle, driving the ball up the park, spreading a ball wide right to Carson and then taking the returned tee-up pass first time with a sweeping right footed shot towards goal that glided just wide of the mark.

Aaron Doran had the chance to get the winner with a first time shot in the box but dragged it wide one on one with the keeper.

With the game tied, the two sides went straight to penalties to earn an extra point for the table. Cammy did well to save a panenka shot and Kyle Banner cannoned his shot off the crossbar for Stirling, but three ICTFC players missed their spotkicks. The shootout ended 3-2 to the visitors.

The next game is an away trip to Cove Rangers on Tuesday. The next home game is against Raith Rovers on 7th August.