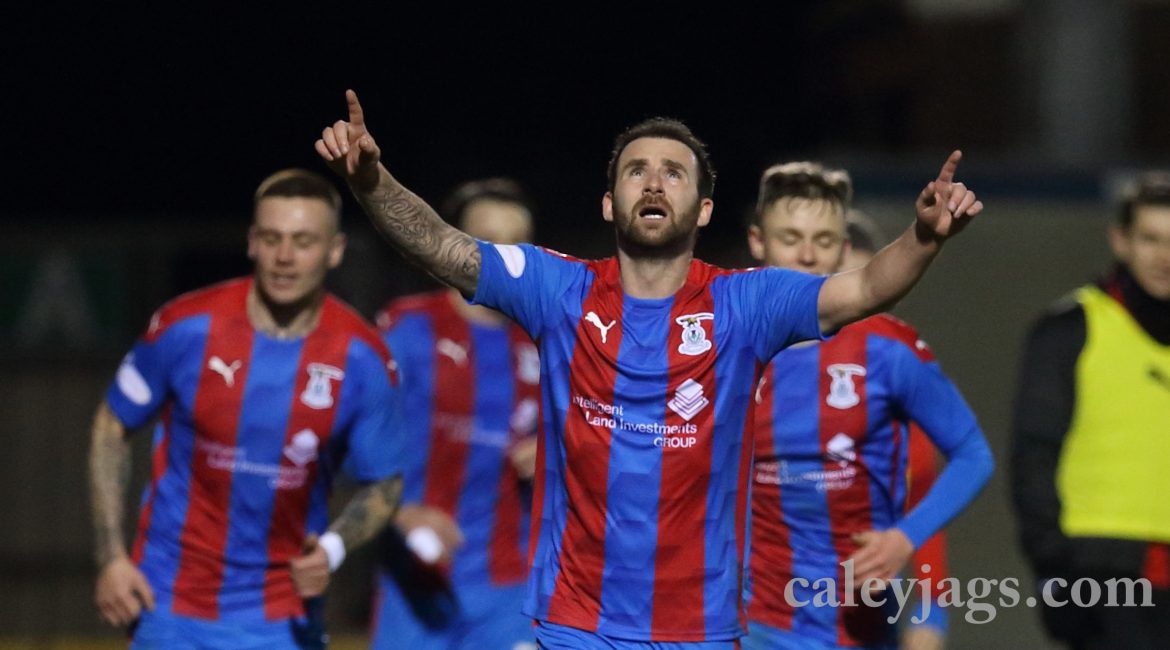 The Caley Jags continued their unbeaten run to five games drew against the visiting Dundee at the Caledonian Stadium.

A close range finish from Liam Fontaine in the box was the only goal in the first half, in favour of the away side. But the much rowdier second half was the perfect accompaniment, with the two sides contributing three goals between them.

Robbie Deas hammered home a volley from a flicked on corner to draw things level and James Keatings put the home side ahead moments later with a swivelled shot into the bottom corner.

Dundee scored the final and equalising goal, with a cushioned pass from Osman Sow being directed on target by converted midfielder, Jordan McGhee.

Substitute, Nikolay Todorov thought his late headed finish from a palmed shot won the match, but it was ruled off by the assistant referee on the near side of the pitch, leaving the result all square.

This 2-2 result kept the Highlanders just outside the playoff places in fifth spot, a point from the pack.

Both sides managed to test the resolve of the defence in the early stages.

Dundee’s Alexander Jakubiak latched onto a long ball down the right flank from Lee Ashcroft at the second minute, and the winger tried to ambitiously lob Mark Ridgers from an angle, just missing the far post.

Barely a couple of seconds later, Ridgers was forced to scramble a clearance away as he was quickly pressed by Danny Mullen in his box.

ICT’s first real attack in response came via Miles Storey, who quickly manoeuvred past defenders down the left hand side with quick flicks of the ball to then fire a great cross into the box from the left hand side, which was met by Shane Sutherland on the jump. The striker’s header was firm but was pulled wide of the mark.

Next was Roddy MacGregor to gobble up a loose clearance from an indirect Scott Allardice freekick.

The young midfielder lined up an effort first time on the edge of the box but was unbalanced before taking the hit, dragging his shot wide. His second attempt would be from a similar position 10 minutes later, but this time would force Jack Hamilton into a low dive to his left.

Dundee wasted a chance to test Mark Ridgers with a decent opportunity to open the scoring at the 26th minute.

Charlie Adam had the time to look up and place a weighted through ball to Mullen on the shoulder of the last man. No flag was waved to rule him off, but as the striker shaped to shoot on his left leg towards the bottom corner from an angle, Devine gave a hard but fair challenge to prevent a shot on target.

Mullen was left the worse off in the aftermath as medical staff provided treatment but was eventually able to continue playing on.

With neither team able to break down the other from open play, the opening goal would eventually come via a set piece for the visitors.

Daniel Mullen’s volley from a high ball instantly hit a blue and red shirt to go out for a corner, and despite pressure from the home support, Charlie Adam’s driven cross was met by a header from Jordan McGhee, which rattled the crossbar.

Lurking close by, Liam Fontaine arrived in the six yard box to tap home on the rebound. It was the first goal in dark blue colours for the former Ross County defender.

Caley almost responded with a goal shortly afterwards. Kai Kennedy and Storey worked the ball around the box in the middle, allowing the latter to play a neat ball to Harper on the run behind the fullback.

His pulled back low cross almost met James Keatings in the box, but no one managed a clean hit on the ball, eventually resulting in the ball dribbling harmlessly into the GK’s hands.

The home pressure continued as ICTFC probed for an equaliser before the break.

Cameron Harper’s deep cross from the left hand side was cleared only to Storey on the edge of the box, who took a touch to settle himself to again fire a low shot that stung the hands of the GK.

Jack Hamilton palmed away his shot, only for Sutherland’s attempt at slipping in a rebound to be blocked by a defender – to the home crowd’s disbelieve, the linesman ruled it as a goal-kick.

The final chance of the half came as James Keatings was allowed to time to attack space down the right hand side of the pitch. His shot 20 yards away from goal on his weak foot was quickly blocked, deflecting to Brad McKay on the flank to guide a cross to Sutherland in the box.

Dundee eventually cleared his header under pressure to secure the first half as victors going into the break.

ICT continued the second half searching for the equalising goal.

Kai Kennedy clipped a cross from a corner at a perfect height for Robbie Deas to volley at the back post, only for it to be hammer off a back in the box.

The loose ball fell to Keatings, but he couldn’t beat Hamilton from close with a sidefooted shot as the goalkeeper got across to dive down to stop it.

Obviously the set piece routine was something that John Robertson and his staff had drilled into the squad in training, because Robbie Deas would be able to hit the target from a similar spot ten minutes later.

Miles Storey burst down the right hand side following a through ball and he fired a low cross that was inches from Shane Sutherland’s outstretched toes in the box.

The loose ball settled perfectly for new substitute Aaron Doran to test the GK with a header which was palmed away for a corner. The captain stepped up to take the set piece and Deas was lurking at the back post to fire home a firm volley into the net, his first in Caley Jag colours in the Championship.

Just like buses, ICT would add their second on their next attack, having waited a while to fire home their first. A whipped cross from the far side by Robbie Deas was killed dead by Keatings facing away from goal in the box, who swivelled to sweep a left footed effort into the bottom corner. An excellent goal from the team, who finally figured out a key to unlock the Dundee defence.

The game wasn’t over in terms of goals though, and Dundee would still have an answer through direct play seven minutes later.

Swedish striker Osman Sow flicked a long ball from fellow substitute Declan McDaid over his shoulder, which landed perfectly for McGhee on the run to fire home on the half volley into the bottom corner.

In the dying minutes of the game, Nikolay Todorov thought had won the game as he wheeled around to celebrate a rebound he converted into the net, but to his disappointment, the referee on the far side had already ruled off the attack for offside.