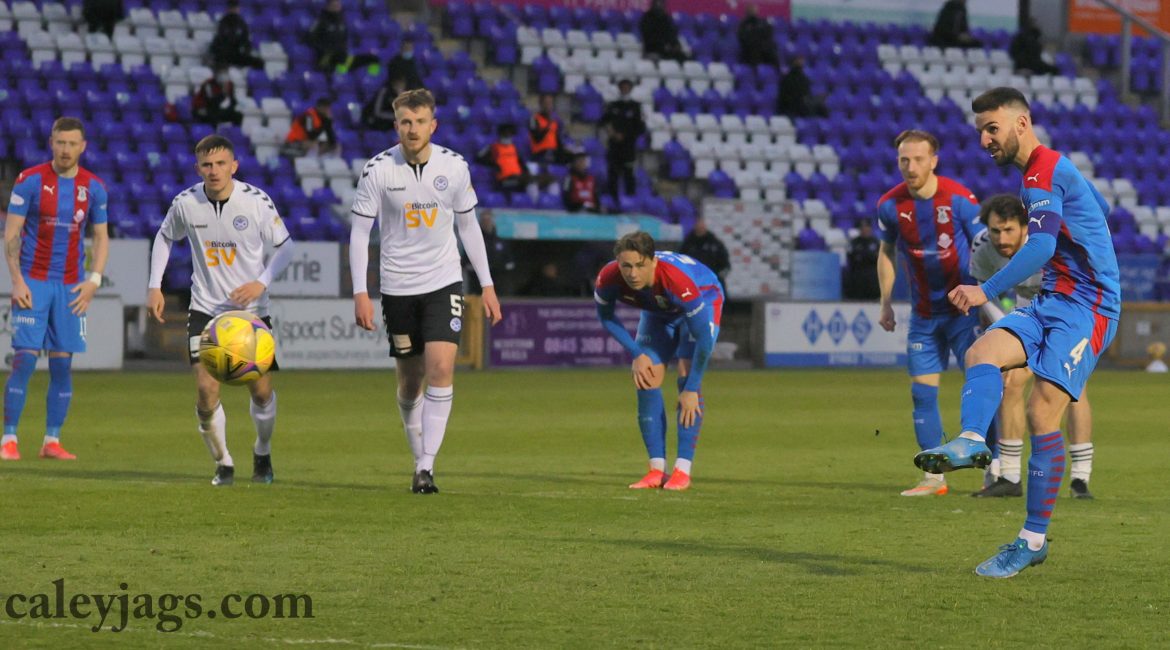 Caley Thistle finished the 2020/21 Scottish Championship in 5th place with an entertaining 2-2 draw against Ayr Utd at the Caledonian Stadium.

An early neat finish from the in-form Daniel Mackay put the hosts ahead but was answered from a spot kick by Aaron Muirhead. Not to be outdone, Caley Thistle would convert their penalty in the early stages of the second half via Sean Welsh. Ayr United would volley home an equaliser from Josh Todd at the near post, bringing the sides level at 2-2.

ICT started the game well with a series of attacks down the flanks against the visitors. Scott Allan saw that left back Patrick Reading was tucked into his own box and spread a pass to the wings for Carson to cross first time. His attempt was aimed low towards Nikolay Todorov but was cut out by Morrison.

Shortly afterwards, the home team would get their goal via an excellent pass from the skipper. Sean Welsh picked out a dinked cross from left to right for Daniel MacKay to take down gently over the shoulder and then slot past Morrison at the near post. ICT continued to attack and had another half chance as Todorov came close to meeting another cross from Carson in the box.

The visitors almost answered ICT’s goal 10 minutes later as a cleared corner from former Caley Jags player, Joe Chalmers found its way to Josh Todd on the edge of the box. The attacker dug out a low curling ball and Todorov was on hand to divert it away from a white shirt, just missing his own far post as it trickled for another corner.

ICT continued to dominate for long periods but The Honest Men set themselves into a set of two deep lines and limited passing opportunities to goal. The best chance at making another breakthrough came at the 34th minute, as Roddy MacGregor found the time to hit a raking ball from left to right for David Carson to chase down the flank. His looping cross towards the back-post was headed back towards the centre by Todorov but a defender was there at the near post to punt the ball away from danger.

The visitors eventually found their way back into the game via a debatable spot kick at the 38th minute. Deas was adjudged to have clipped Jack Baird in a crowded area as they both stretched and challenged for a bouncing ball in the box. The centreback went to ground when he felt that he had received contact and referee Craig Napier agreed, pointing to the spot, amid strong protests from the home team. Aaron Muirhead didn’t mess around to slot a low side footer away from Ridgers into the right hand corner to bring the scores level.

The Caley Jags had the last say before the whistle for half time, with Scott Allan finding Todorov in space with a searching cross. The Bulgarian took his chance on the volley but fired it over the bar from a difficult angle.

The sides wouldn’t be long level at the beginning of the second half.

ICT began the restart brightly with their second goal of the game in a quick passing move up the park. Roddy MacGregor started the attack by slipping past one tackle and finding Todorov on the edge of the box in the middle. The striker initially shaped to shoot but looked up to find a through ball for Carson bursting a lung down the flank.

The Geordie’s first time low ball got in the mixer and almost met Roddy but het was clipped in the box running inside to out across a defender. Craig Napier awarded a penalty and despite Peter Morrison diving to the same side, he couldn’t stop Sean Welsh’s firm drive into the left hand corner.

The Highlanders had a chance at a third via a long ball up the park from Ridgers straight from a corner. Scott Allan managed to take the loose ball and hook a cute pass around the corner for Sutherland to cut inside and shoot, but his effort was too high to test Morrson’s goal. It was the attacker’s last contribution to the game, with Shane coming off for the on-loan winger Arron Lyall.

From another attack in response to a failed set-piece by Ayr United, Todorov and Allan worked together to push rapidly up the park, with the latter finding Harper in space inside left of the box. The fullback’s first time low shot was blocked by Jordan Houston for a corner. On another break, Scott Allan was clipped as he drifted past a player in midfield, with numbers flooding forward to help out. Craig Napier allowed play to go on with Lyall and Mackay playing a 1-2 to set up the young winger for a prodded attempt that was just wide of the near post from a tight angle.

Against the run of play, Ayr United would get their second equaliser from a set piece.

Joe Chalmers’ whipped corner was half cleared and made its way back to the midfielder on the far side, with his curling left footed ball being met by Todd at the back post and fired low through Mark Ridgers.

With the teams again all square, both sides tried to push for a 5th combined goal by bringing on fresh bodies as Daniel Mackay went off for Aaron Doran and Moffat was subbed off for another former face in Tom Walsh.

This third goal almost came from a near side corner from Cameron Harper six minutes from time. The leftback’s whipped left-footed cross was flicked on the volley by Danny Devine towards the far post, but from the tight angle he couldn’t direct it inside of the far post’s side netting, nor could he find a blue shirt lurking to opportunistically convert.

In the dying minutes, ICT managed to work the ball down the right hand flank, with Arron Lyall chipping a cross to the near post to be knocked into the centre of the box. The loose ball seemed to be in no man’s land, and none of the ICT players waiting for the cut back could beat the defenders for the clearance.