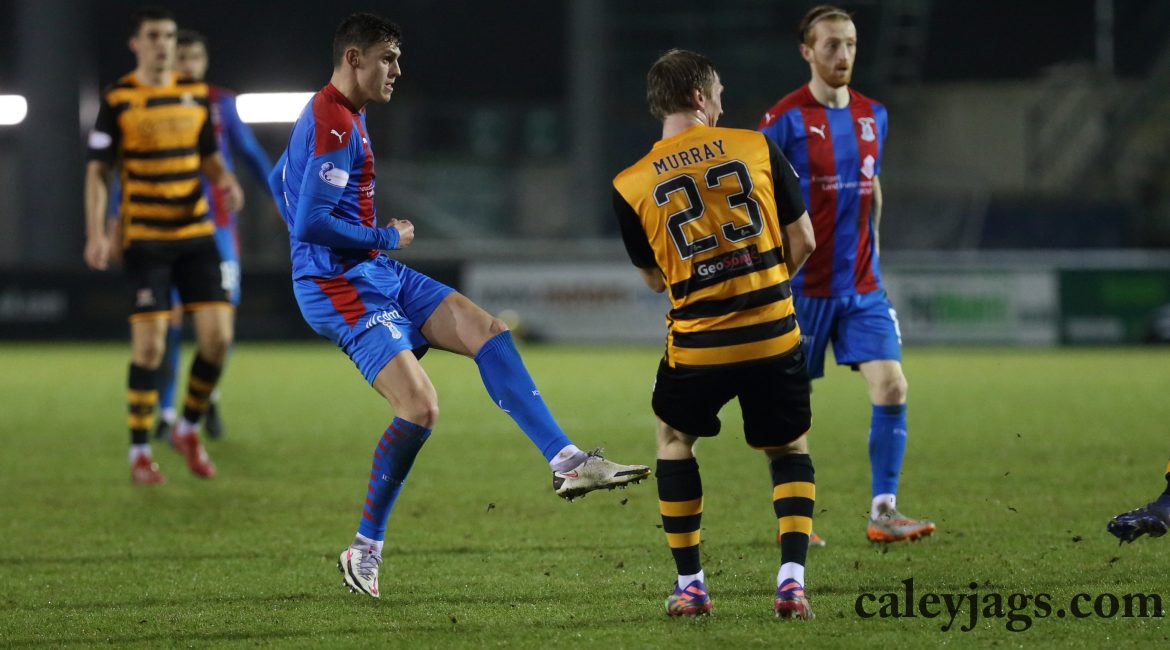 Wallace Duffy and substitute James Keatings contributed heavily to ICTFC’s comeback as the Highlanders notched two goals in two minutes, in response to a goal from Alloa in the first half.

The comeback was first started by an excellent angled finish from fullback Wallace Duffy on his weak foot. James Keatings then guided a half volley into the opposite corner shortly afterwards, and a third was almost added from the spot, with Shane Sutherland winning a penalty that was taken by Storey but saved at the 82nd minute.

Despite the continuing chances in favour of the home team, including an offside goal, the Wasps were awarded and successfully scored a penalty with five minutes to spare, resulting in a 2-2 draw at the Caledonian Stadium.

Early into the game, the Highlanders had a strong case for a penalty. Roddy MacGregor controlled a pass on the right hand side of the pitch, squirmed past one tackle and upon entering the box, seemed to have been tripped. Despite the protests of players and staff, Grant Irvine signalled for play to keep going.

Opportunities were being created from ICT’s pressing up the pitch without the ball, trying to force an error from the visiting Wasps. David Carson picked the pocket of an Alloa player, drove forward before rolling the ball in the path of Roddy who then set up Daniel Mackay on the left half space of the pitch outside the box. The young winger took his shot first time, trying to bend it into the far bottom corner but couldn’t get enough power to beat Neil Parry from that distance.

The opening goal came via opportunistic defending from the visitors against the run of play. Danny Devine tried passing the ball out from the back but it was cut out by Grant 30 or so yards from goal and was immediately threaded through into the box for Innes Cameron to chase. Ridgers tried to make it difficult for him by rushing out to close the angle but the striker rounded the keeper and tapped home into an empty net.

Despite the setback, the Caley Jags almost grabbed the equaliser from a freekick moments later, with Nikolay Todorov creating a good run to get on the end of Harper’s cross, only to see his header drift inches away from the far post. Scott Allardice then had a pop of his own from range, skipping into space with the ball but perhaps not getting the contact he wanted, getting the shot on target but not with the desired power to beat Neil Parry in goal.

Another chance came as David Carson characteristically harried Liam Dick deep into his own half and claimed the ball, eventually digging out a lobbed cross at the back post that Todorov just about managed to redirect on goal under pressure, but on the wrong side of the top corner.

The first half almost ended on a strong positive note, save a late whistle from Grant Irvine. Roddy MacGregor managed to ride a tackle near the end of the first half and rifled the ball between the posts for an assumed equaliser, but the referee had blown the whistle for a foul a millisecond prior, to the Caley Jags’ dismay.

ICTFC picked up where they left off in the second half as they continued to look for a response to Alloa’s opening goal. Cameron Harper’s deep corner at around the 50 minute mark was met by Danny Devine at the back post but his header went just over, having taken a knick from an Alloa defender.

A minute later, the boys in blue and red were up the park again, this time Roddy managed to find Allardice on the edge of the box, who tested Parry with a low drive down to his right hand post.

The visitors almost grabbed a second goal from a half chance at the 58th minute. A deep freekick from The Wasps’ Scott Taggart somehow skidded past a crowd of bodies and was met by Alan Trouten from an acute angle. The midfielder tried to sneak a shot past Ridgers’ near post but shanked it hide and wide of the mark.

Barry Wilson and Ryan Esson tried to change the flow of the game by making a positive change, swapping out Daniel Mackay for Miles Storey.

The Englishman was immediately involved with a fast move up the park, picking up the ball at the RB spot and flicking the ball to David Carson, who then set loose Sutherland in the middle of the pitch. With the ball making it all the way to the other side of the park with Harper, it was a shame that Nikolay Todorov couldn’t beat the defender to the cross into the box.

The same could be said later in the game as James Keatings came on for Roddy MacGregor to further change the look of the attack. Keatings had a give and go on the right hand side of the pitch that set up Shane Sutherland down the line inside the box. The attacker cut a ball back towards Allardice but Ray Grant managed to clear the ball away from danger.

The eventual equaliser did come, but not from an expected source. Storey flicked a cute ball around the corner to Harper on the left flank and the fullback’s low cross almost fell perfectly to Keatings in the box but then deflected to Todorov who kicked fresh air. Wallace Duffy picked up the scraps and on his left peg, smashed a mid height shot into the inside netting of the left hand side.

Emboldened by the breakthrough, ICTFC marched up the park and added another goal to put them ahead almost immediately after the restart. This time Storey’s low cross made it to James Keatings in the box and his daisy cutter on his left peg nestled in the right hand corner, with Parry unable to claw it away from goal.

Like buses, ICT couldn’t stop creating clear cut chances when they found the key. Shane Sutherland’s firm half volley on the edge of the area was adjudged to have smashed off an Alloa defender’s arm in the box, but Miles Storey’s low shot to Parry’s right from the spot was saved.

Up next, Miles Storey and Keatings linked up again with another clipped cross from the left hand side, but James Keatings’ glancing header was always bending the wrong way away from goal. Miles Storey then neatly finished a cross from Allardice with a diving header, only to see the flag go up to rule him offside

But despite this late attacking dominance from the hosts, the visitors hit a suckerpunch. Alloa Athletic latently got themselves back into the game when fullback Jon Robertson was ruled to have been tripped inside the box by Cameron Harper. The referee pointed to the spot and Allan Trouten fired the opposite way from Ridgers to bring the game level again.

A series of dangerous corners in a row from Cameron Harper and Keatings didn’t create a final goal to separate the sides, despite the chaos it created. The game ended with a squashed counterattack from Alloa Athletic, finishing 2-2.