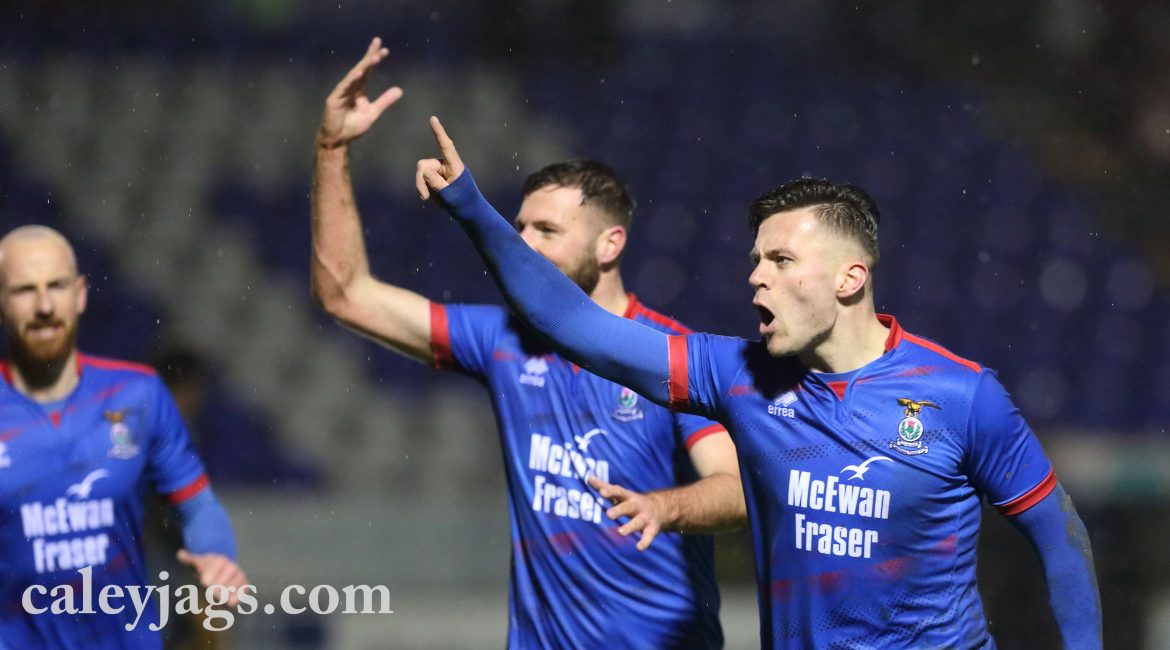 Dricht stormy weather would not prevent ICTFC from getting their win on the way to the final of the Tunnock’s Caramel Wafer cup; with Miles Storey and James Keatings having their say in proceedings to secure a 2-1 victory against Rangers Colts.

But the Caley Jags would finish on top a man short, with James Keatings ajudged to have simulated contact in the second second half and thus earned a second booking to take him off the park – replays indicated a different take on the incident and ICTFC will appeal this decision.

Under difficult conditions, the teams battled against each other, the wind and rain as Rangers FC Colts aimed to be the first ever u21s team to make it into the final since Colts side were introduced into the tournament.

Before this tie, Rangers Colts had a whistle top tour of the UK having previously faced Berwick Rangers, Stranraer, Ballymena United, Solihull Moors and Wrexham up to this stage. They set up against the home team in a 4-3-3, with Josh McPake, Dapo Mebude and Jake Hastie playing up front in a three. Hastie and Firth were the only over-agers in the team.

For ICTFC, Lewis Toshney made his first start for the team, replacing Brad Mckay. James Vincent was the only other change to the team, replacing Sean Welsh. Caley Thistle matched the visitors man for man in a 4-3-3, with Carson, Vincent and Trafford starting together in midfield and White, Walsh and Storey heading up the spear.

With the wind blowing from left to right, ICTFC had a slight disadvantage in the early stages of the game, but were first to muddy the elbows of Rangers’ keeper, Andy Firth. Miles Storey’s left footed cross was initially cleared away by Finlayson, but David Carson was on hand to gobble up the scraps and to sweep a low bending shot towards the right hand corner. Firth covered it well.

A little fortune would be needed to get the visitors ahead, coupled with a well taken finish at the sixth minute.

A through ball from Dapo Mebude cannoned off of Kevin McHattie’s legs, returning to the striker near the edge of the box, and hit a low shot across goal into the net to start the score for the game, evading Ridgers’ fingertips.

Ten minutes later, ICTFC had more of a grip of the game’s tempo and tried to take advntage of it with a spurt of chances.

Tom Walsh killed a Ridgers long pass up the pitch dead and lost his man to spread the ball wide to Storey. The English forward was allowed to cut onto his favoured right foot but his low shot was dragged slightly away from the near post from 25 yards. Next up was Lewis Toshney to have a go, flicking a skimmed cross from Storey wide of the mark, after a corner was initially cleared.

At the 26th minute, Charlie Trafford was forced off after awkwardly landing following a slide on slippery ground and Keatings came on to change the formation; from a 4-3-3 to a 4-2-3-1. During the change, Rangers’ Josh McPake came close with a dipping effort that missed Ridgers’ left hand post.

Shortly afterwards, Rangers came within a whisker of doubling the lead with a wasted chance. Kai Kennedy’s cross from the right hand side was met by Mebude in space from around six yards out, but his close range shot cannoned off the crossbar and did not threaten the net. Jake Hastie tried to divert the follow up but a crowd of bodies eventually cleared it to safety.

With difficult conditions effecting play, ICT’s Kevin McHattie tried a pop from 35 yards, smashing it low but drifting wide of the mark.

But an equaliser did eventually come just before the break. Jordan White laid off a Storey cross to James Keatings, who drove a left footed half volley off the turf outside the box and Breen’s leg helped guide it into the bottom corner.

The second half started with an inocuous yellow card that had later significance on the game. Mebude was evasive on the left hand side and was taken down by Keatings for a free-kick near the goal line, outside the box – the Caley Thistle number 7 was booked for his troubles.

Kennedy’s cross was kept away by Toshney at the back-post, preventing an easy goal from Breen. At the other end of the pitch, Tom Walsh skelped Shiels on the right hand side to set up Tremarco in the middle of the box, who kept his effort on target but not with the sufficient power to beat the man between the sticks.

With the match literally and metaphorically on tricky terrain, the referee made a controversial call that would alter the game at the 57th minute. James Keatings ran onto a Storey cut back and seemed to be breaking into the box before falling near the edge. Dickson seemed to have made contact with the attacker but Greg Aitken made the call to give Keatings a second booking and a red for simulation.

Again Greg Aitken was forced into a tight call with the aid of his linesman moments later. Mark Ridgers used the wind to get a long ball ball up the park and Walsh seemed to have prodded in a legitimate goal past Andy Firth on the bounce. But the flag went up and ruled it offside.

The next time the ball hit the net, the goal would stand as Caley got their winner.

Vincent directed a volley from close range that was palmed away just shy of the six yard box. Miles Storey reacted quickest to hammer home a left footed shot on the volley to go a goal ahead.

With that goal secured and a man down, ICTFC did their best to shut down the game and prevent a game going into extra time.

At the 80th minute, Lewis Toshney scrambled to try to stop new sub, Young-Coombes on the left hand side but caught him and got booked for his troubles.

Kennedy clipped his freekick towards goal from a tight angle but couldn’t give it the dip necesary to make it force Ridgers into a save; with it kissing the crossbar on its way out of pay.

Kai Kennedy again tried to force a tie in the dying seconds of the game, but cut across the ball and sent it well wide just before the final whiste.