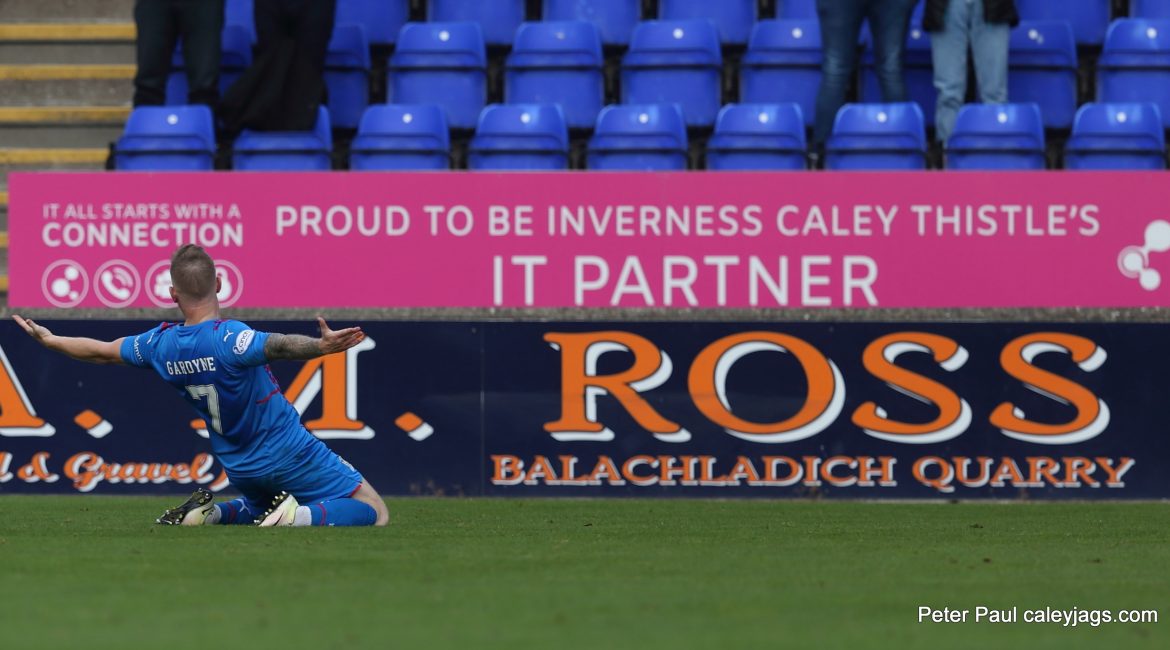 ICTFC kept their first place spot in the Cinch Scottish Championship with another home win against Queen of the South FC at the Caledonian Stadium.

A first half 25 yard freekick from Sean Welsh put the Caley Jags ahead in the first half but the visitors got back into the game via a top corner finish from Lee Connolly at the 74th minute. With minutes to spare, Michael Gardyne smashed home a close range volley that secured the points and ensured that the Highlanders would stay three points ahead at the head of the table. It finished 2-1.

Following the 0-0 draw away at Dunfermline Athletic, Billy Dodds switched in Michael Gardyne for Aaron Doran and started Sean Welsh for Shane Sutherland in the only changes to the starting lineup. In response to their recent loss to Arbroath FC, Allan Johnston made a few more substantial changes; subbing out Harry Cochrane for Ben Liddle, Ruben Junior for Max Johnston and Ruari Paton for Niyah Joseph.

The latter change for the visitors was involved very quickly in the game as Joseph was first to test ICT’s resolve with a tame shot from outside the box to Mark Ridger’s right hand side; an easy save from the shot-stopper.

Up at the other end, after being coaxed by the home fans and the QOTS defence, Scott Allardice hoovered up a loose ball and let rip from around 20 yards right of centre, driving an effort just wide of the far left post.

The hosts continued to apply pressure against a packed midfield and the first real shot on target for the Caley Jags brought forth the opening goal of the game at the 11th minute. Manny Duku won a freekick around 25 yards out from goal after being taken down by Debayo on the spin during a David Carson give and go. Sean Welsh stepped up and side-footed a low, curling effort around the wall and into the bottom right corner to open the scoring.

The hosts continued to search for the second goal ten minutes later as Welsh played a quick through ball to Michael Gardyne down the left channel after being fouled at the halfway line. The nippy winger almost found Walsh with a cutback, as the winger made a cross box run to the front post; failing to connect under pressure. Next came Duku as the Dutchman connected in the air with a clipped ball from the left hand side but it was wide of the mark.

ICT continued to probe for a second as Roddy MacGregor played a quick pass to Gardyne and his first time pass around the corner set Duku into the box in space. To his credit, goalkeeper Solomon Brynn closed down the shooting angle quickly and Duku’s cutback wasn’t able to find Walsh for an easy tap-in – eventually getting cleared from the box.

Sean Welsh continued to excel in his “Quarterback” role as he looked up and clipped a first time looping 20 yard ball to Gardyne on the left hand flank at the 40th minute. His pass just evaded a diving Duku and Walsh in the box, eventually going out of play. Kirk Broadfoot rose highest just before the end of the first half to test Brynn from a set piece, but he didn’t get enough power on it to beat the keeper.

The visitors re-started the half brightly and thought they levelled the score in the early moments of the second half. Lee Connolly ran into space to slot past Ridgers off a quick through ball but despite the cheers from the travelling support, the equaliser would not count as he was ruled offside. Moments later, Connolly had another chance ruled off for offside as the attacker connected with a Joseph flick that was saved by Ridgers.

Shortly after being subbed on, Reece McAlear stung the palms of Brynn on his weak foot, letting a ball go across his body before smashing a firm drive that was at head height for the keeper.

Michael Gardyne switched flanks to the right hand side to double up with Walsh and the winger cut inside to fire back towards the near post with a low effort, forcing a diving save from their keeper. The visitors came up with an equally dangerous response a minute later as Max Johnston tried to tuck a fizzing low shot towards the far corner that whistled past Ridgers’ right hand post.

Tom Walsh rattled the crossbar as ICTFC continued to search for a second goal. David Carson gathered a pass back from a cleared ICT corner and found Walsh with a crossfield ball to the left hand side. The winger beat his man and his left footed cross bent back towards goal and  clipped the far post’s top corner on the way out.

With new subs on the pitch, the visitors looked renewed and the guests would get their goal to level the scores at the 74th minute. Lee Connolly took down a cleared header from a near side long throw in and bent a right footed curling shot into the top corner, away from Ridgers.

Emboldened by the equaliser, recent QOTS substitute Aiden Fitzpatrick bombed down the left hand flank with space and his cross into the six yard box found no white shirts wanting, but the clearance from Daniel Devine cannoned off Kirk Broadfoot and forced Ridgers into a quick save.

Despite the late rally from the Doonhammers, it wouldn’t be long before the home team was back in front. Robbie Deas hit a long ball down the left hand channel that was flicked in the air by Jamieson and found Michael Gardyne in the box. The winger took a touch before smashing home a volley for the third goal of the game.

ICTFC almost flattered the scoreline as David Carson beat a slack tackle to break into the box from right hand side and his square ball looking for Jamieson was almost poked home into his own net by Paul McKay on the stretch, with it barely going the wrong side of the post.

Billy Dodds’ side next face Hamilton Accies away next Saturday and will next host a game against Greenock Morton on the 15th October.