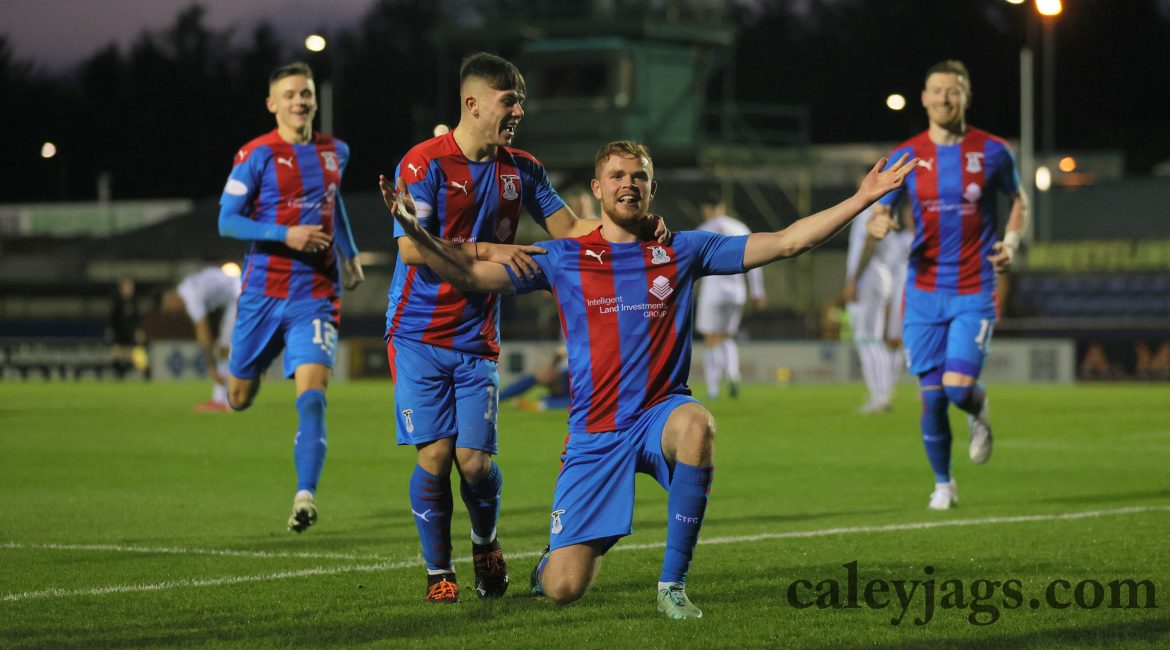 ICT’s first in-person crowd of this season was treated to a comfortable home win against Raith Rovers FC, winning 2-0.

Around the midpoint of the first half, James Keatings arrived to sweep home a cutback from Miles Storey, and Scott Allardice finished off a great move with a first time sidefoot finish in the second half.

This result leaves the Highlanders knocking on the door of the Scottish Championship play-off spots, just a point away.

The visiting Fifers were the first to test the resolve of the ICTFC back line. At the 2nd minute, Mark Ridgers had to stay alert to rush off his line to cut off a long ball that almost reached Manny Duku on the edge of the box in space.

Ethan Ross was next to test the defence as the pacey winger forced Robbie Deas into an excellent tackle to cut him off, having initially beat the defender to a ball in the box.

Raith Rovers would then be inches short from being a goal down in ICT’s first real attack of the game. James Keatings picked out a through ball to Kai Kennedy on his left, but his pass was intercepted, only for it to immediately get back to a blue and red shirt.

Receiving the ball with time to sort out his options, Miles Storey turned into space right of centre of the box and almost beat Jamie MacDonald with a driven shot, clinking the up right of the crossbar on its way out.

The Englishman continued to cause problems for the visiting defence and his next attack would result in the opening goal, following a soft shot on target from Kieran MacDonald.

Scott Allardice broke up a Raith Rovers move in their own half to set up Miles Storey with acres of field to take on and an exposed backline. The striker quickly worked his way up to the right side of the box and looked up to square a pass to Keatings, who swept it home on his right foot.

10 minutes later, Miles Storey felt a sense of deja-vu as he came close to adding to the score. Shane Sutherland cut a ball back to Storey in the box from the right hand side, who took a touch and again rattled the upright of the crossbar from close.

Raith Rovers were also subject to some fortunate luck to keep the score at 1-0. Scott Allardice curled in a cross from the far side and their captain, Kyle Benedictus tried to to clear on the volley, but instead sliced the ball behind him, forcing MacDonald into a catch.

Storey then continued to torment the defence a moment later, dipping from left to right but failing to beat the keeper at his near post on his left foot from a tight angle.

Just before the end of the half, Danny Armstrong managed to work his way into the box to set up Duku from around six yards but a smart block kept his shot away from danger and out for a corner, which was eventually cleared.

Barely 30 seconds into the half, ICTFC resumed the flow of play as the hosts continued to look for a further goal to the scoreline. Miles Storey’s cross from the far side was cleared to Roddy MacGregor on the edge of the box, who took a touch and hit a low drive that forced MacDonald into an early save.

Miles was soon after found frustrated as his deflected shot hit the side netting for a corner. From the set piece, Keatings’ whipped cross seemed to have flown directly on target and crossed the goal-line, causing confident shouts from the touch line and the crowd, but there wasn’t enough clarity for the ref to rule it as a goal.

Up next to test the Raith Rovers goal, Kai Kennedy’s deep whipped cross to the back post was met by Sutherland on the stretch, forcing the keeper into a reflex save. On the follow up, it looked like the striker was clipped in the scramble to clear the ball but the play was allowed to go on.

Kai Kennedy’s hard work in the game should’ve merited a goal as the young loanee set out on a mazy run. The winger stopped a cross-field ball dead with an excellent first touch, dodged a few tackles and worked his way into the box, hitting a shot that deflected onto wrong side of the side netting.

Eventually, perhaps inevitably, the Caley Jags would add another goal to the scoreline. It led from great interplay down the right hand side to set up Kai with a few yards of space on the right flank. His cross was chipped towards Storey at the back post, but his touch fell kindly to allow Allardice to pick out a first time sidefooted shot into the bottom corner. It was the second consecutive goal at home for the Summer signing.

After the goal, ICT continued to pick apart the visiting defence, hitting one-twos between Harper and players, with the final chip over defence just cut out before the fullback could finish off the move.

The slick pitch was to blame for another chance to test MacDonald, with Shane Sutherland slipping just as he shaped to shoot from another back post cross.

A third goal almost came with five minutes to spare. Roddy MacGregor intercepted a pass to set up Kai down the middle in space. With options either side, the winger threaded through a ball to recent sub, Daniel Mackay and the attacker’s drive to the far post was saved on the stretch.