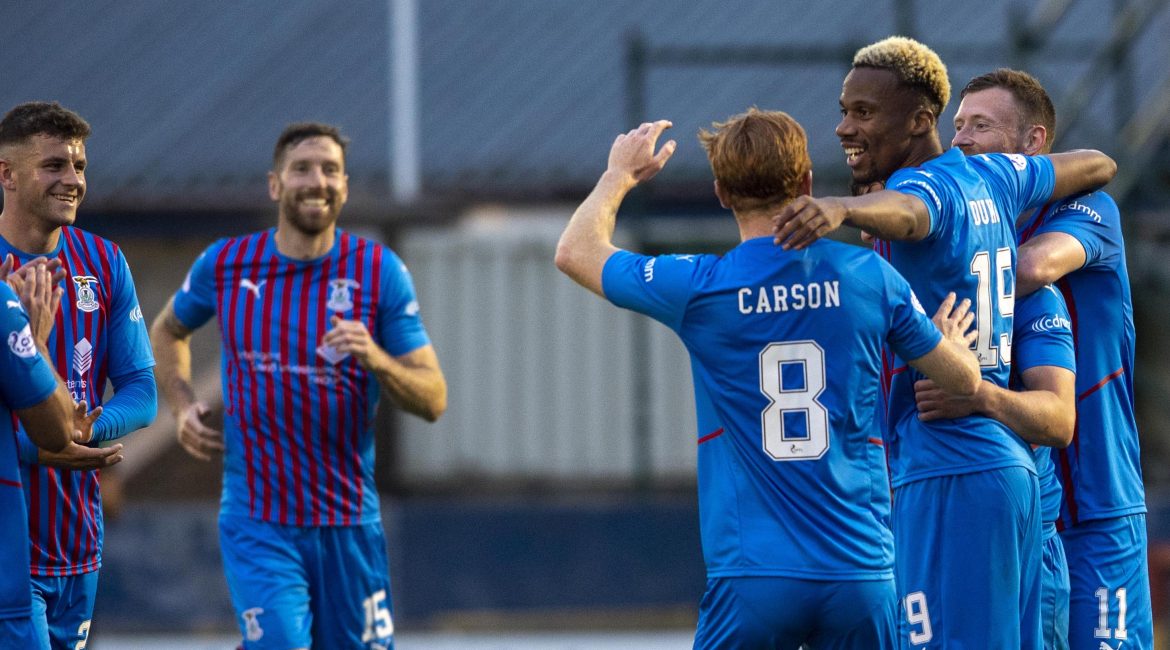 A neat near post finish from debutant Manny Duku and a top corner screamer from Aaron Doran in the second half was enough to secure a strong start to ICTFC’s 21/22 campaign.

In front of fans for the first time in months, spectators were treated to chances galore as ICTFC worked through the gears for long stretches against Peterhead FC. The final 2-0 scoreline places the hosts second in Group A with a game in hand.

The Blue Toon arrived at the Caledonian Stadium on the back of a 2-0 defeat against Hearts FC in the first fixture of the Premier Sports Cup group. Facing the visitors, Dodds was able to hand out a series of competitive debuts to Manny Duku, Reece McAlear and recent signing, Kirk Broadfoot in defence. Tom Walsh made his second debut on the right wing, having re-signed during the Summer window.

Against the visitors, Manny Duku was a live wire threat as he constantly found threatening spaces to receive the ball and link up with teammates. In the early stages the Dutchman somehow managed to keep a scrap of the ball in play inside the box near the goaline and his cutback to Aaron Doran was almost controlled to allow for a shot but a defender gobbled up the loose ball and cleared. Aaron Doran would almost pull off a spectacular half chance later when Kirk Broadfoot’s lofted ball from deep over his shoulder was inches from connecting on the volley.

Again Duku threatened as he twisted and turned, shifted and chopped inside the left hand side of the box, finally carving out a shot on his strong right foot directed to the near post that was blocked. Shane Sutherland was on hand to pick up the scraps and fizz a firm low drive across the box that was short of an ICT foot to direct goalwards. The Dutch striker tried a less convincing attempt from further out a moment later, this time from around 20 yards with his shot on target but without the power to beat Brett Long in goal.

The Caley Jags were starting to get into a rhythm as it reached the 21st minute, with Ryan Fyffe finding fellow ICT Academy graduate Cameron Harper in the middle of the park, whose cute flick found Aaron Doran in space in the box. The attacker tried to squeeze the ball past the keeper’s far post on his left peg, but dragged his effort wide.

From a corner, David Carson was on hand to collect a cleared cross and almost set up debutant Kirk Broadfoot at the back post with a whipped cross, only for the ball to be nicked out for a corner instead. From that set piece ICTFC somehow weren’t finally ahead as Doran’s slight connection on a cross required a combination of the post and the keeper to keep it out.

The pressure continued in the first half as the Caley Jags pushed up the pitch following a cleared Peterhead FC corner. Walsh held up a long ball up the park to find a Caley shirt in the box, with Shane Sutherland and Doran working the ball across to Harper lurking the furthest to the left in the box. The young fullback kept his effort down with a drive towards the near post, but it was blocked by a diving defender’s leg.

Up next was Aaron Doran to have a crack, taking a touch from a pass in the middle and hitting the ball on the bounce on target. The bobble before it’s arrival made it difficult for Long to handle, who could only parry the spinning effort away before collecting. Again at the 35th minute Doran took advantage of lax defending to collect an unclaimed ball in space in the box and he found Welsh in the middle with a mid-height cross, but the midfielder couldn’t get over the ball and convert – firing over the bar.

When the visiting side finally had their first attempt to test Mark Ridgers at the 39th minute, Jordon Brown’s audacious effort from an angle went well wide of the target.

The sides would go to half time with nothing separating them, despite one last big chance to break the deadlock falling in favour of the home side.

David Carson drove the ball inside the middle of the park and slipped Manny Duku through on goal with a dainty pass. The striker looked to round the keeper but couldn’t squeeze his effort past the near post from the tight angle. Duku had another chance to get his goal from a cross but didn’t get the right contact and directed it wide, to his frustration.

ICTFC got their lead early into the second half however, and Duku’s perseverance would finally pay off. Walsh knocked on a header to Welsh in the middle, who dinked a ball through for the striker to chase and fire low and hard past the near post.

The hosts would get a second in style three minutes later as Doran and Sutherland played a game of keep ball as they drifted around the Peterhead FC midfield. When Doran was given the time to look up and line up a shot, he pinged a screamer into the top right corner from 25 yards; Brett Long was helpless.

Peterhead FC pushed to creat a few chances to keep Ridgers on his toes later on in the game. First it came via a slightly scuffed effort from range by midfielder Scott Brown, which was gathered easily by the goalkeeper. Another fell to striker Russell McLean from a cross, with the striker putting his neck through the ball to direct it on target with power but it was still a big ask to beat Ridgers on his line.

In the dying minutes of the game, debutant Michael Gardyne almost set up a third goal for the Caley Jags, drilling a pass across goal that took a touch off Roddy MacGregor but not enough to direct it past the keeper from close to the six yard box.