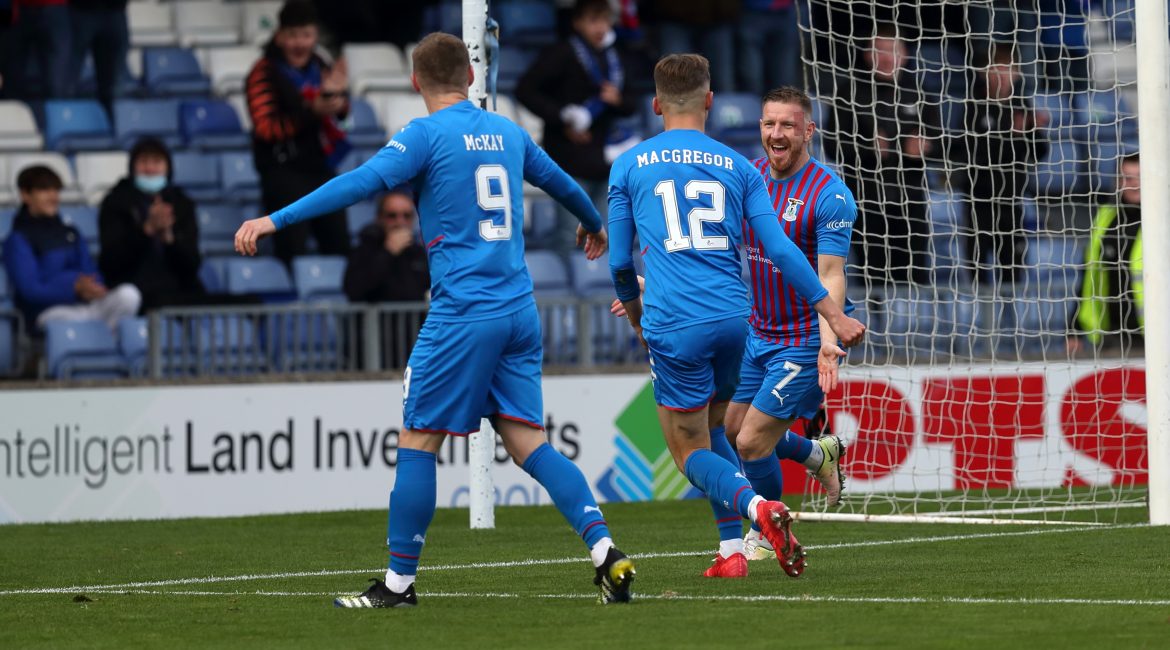 ICTFC extended their lead at the top of the cinch Championship table to five points as they dispatched Greenock Morton at the Caledonian Stadium. Two goals either side of the break from Billy Mckay and Michael Gardyne were enough to win the full points for the Highlanders, winning 2-0.

In response to the 2-1 away loss against Hamilton Accies two weeks ago, Billy Dodds made some forced and unforced changes to the first team squad. Cameron Harper, Manny Duku, Tom Walsh and Wallace Duffy were left out of the starting lineup in place of Shane Sutherland, Reece McAlear, Danny Devine and Billy Mckay. Scott Allardice moved from his natural midfield position to play at right back and David Carson unfortunately sat out the game due to personal circumstances.

Gus Macpherson likewise made two changes to his side from the last Scottish Championship game against Arbroath FC, replacing Lewis McGregor and Gozie Ugwu for Jimmy Knowles and Thomas Allan.

The Caley Jags had the majority of the ball in the early stages and sought to test the visitor’s resolve with a series of probing passes.

Robbie Deas’ long ball down the left hand side almost found Shane Sutherland in the box but the pass was hard to take down from the air, with Billy Mckay waiting for the squared pass before it was cleared away. Michael Gardyne’s short corner from the far side to Reece McAlear a minute later was whipped first time towards the backpost and it came inches from meeting an ICT head, instead just going out for a goal kick.

On the break Greenock Morton threatened as Jaako Oksanen almost caught Ridgers out as he drove down the left flank, dummied in and out before attempting a scuffed cross that clipped the upper side of the post before going out.

The Caley Jags continued to ask questions of The Ton’s defence at the 14th minute as Roddy MacGregor received the ball on the left flank, dummied inside and squared a ball to McAlear in space on the edge of the box. The midfielder settled himself before attempting to caress a shot around a defender and towards the top bins. But it deflected out for a corner instead.

From the set piece the visitors broke forward on the counter again via Oksanen, who made it into the box but was blocked by Captain Sean Welsh, who swept across and shepherded the ball out for a goal kick. The hosts would have to be alert again as Greenock Morton tried to test Ridgers after securing a loose ball in ICT’s box, but the Highlanders got bodies on the line to make sure any attempt wouldn’t go near the goal.

It wouldn’t be long before the first goal would come at the 19th minute after some very quick thinking from Mark Ridgers.

Greenock Morton had many players up for a corner and the ball went out of play for a goal kick. Ridgers took advantage of the players rushing back to smash a quick long ball for Mckay to chase on the shoulder of the two defenders left behind. Via a fortunate ball bounce the striker was behind with loads of space to attack and it was a case of picking his spot and slipping a left footed shot past Jack Hamilton to open the scoring. It was a continuation of the Northern Irishman’s good form in the Challenge Cup, having scored a hattrick in last week’s game against Elgin City FC.

Just before the break, Morton had a half chance to test Ridgers as Jimmy Knowles peeled off a defender into the box but dragged his right footed shot well wide of the far post. The midfielder had a slightly better attempt moments later when the ball fell to him again after an ICT move broke down, and this time he forced Mark Ridgers into an easy low save to his right.

The second half of the game would resume 15 minutes later than usual, to allow for medical treatment following a nasty head collision between Cameron Blues and Michael Gardyne just before the break.

Having sought medical attention from staff, Michael Gardyne was cleared to come back on and he was on hand to extend the lead for the hosts early into the second half.

Billy Mckay initially failed to connect to a cutback in the box on his left foot, with the ball eventually falling to Gardyne who made a late run to opportunistically sweep home from around 8 yards out. It was the winger’s fourth goal in four straight games for the Caley Jags.

Up next to test the opposition goal was Reece McAlear from about 25 yards in a set piece, right of centre. The midfielder whipped a great drive up and over the wall from a freekick, stinging the hands of Hamilton.

Michael Gardyne almost set up substitute Manny Duku 20 minutes into the second half via some precise play from the Highlanders. ICT picked apart Morton’s midfield to progress up the park and worked the ball to the winger, who scooped a first time ball around the corner for Duku to test Hamilton from an angle inside the box, but his low drive was saved by the goalkeeper’s legs.

The visitors had an excellent chance to bring a conciliatory goal back home at the 73rd minute.

Reece Lyon stung the palms of Ridgers with a mid-height shot from outside the box that the shot stopper could only parry away, and it seemed like he was at the mercy of Gary Oliver who reacted quickest in the box to pounce on the loose ball. The striker’s diving header somehow skidded wide of the near left hand post and past the wrong side of the net from around the edge of the six yard box. An offside flag wasn’t there to spare his blushes; it was a clear opportunity not taken for the visitors.

The last chance of the game came five minutes from the end of normal time as Roddy MacGregor spread the ball wide to his right to allow substitute Lewis Jamieson to drive forward and cut inside. The young striker managed to open a window of space before attempting a low shot going back towards the near right hand corner. Jack Hamilton came across to possibly tip it around the post but the linesman ruled for a goal kick.

ICTFC next host Arbroath at home on Tuesday 26th October, following a trip away against Raith Rovers on Saturday 23rd.