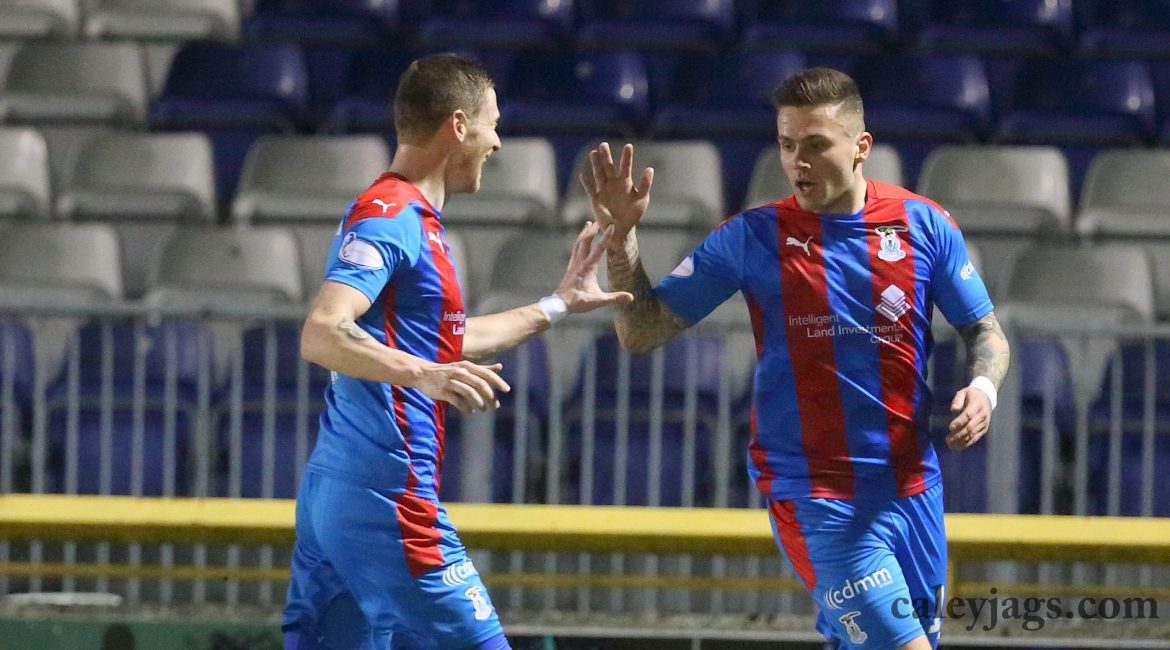 ICTFC and Hearts shared the points on a record breaking night at the Caledonian Stadium. Fans set the virtual record attendance to watch a feisty display between the teams, with each grabbing a goal-a-piece.

Miles Storey opened the scoring with a swept half volley past Craig Gordon at the ten minute mark, and Liam Boyce responded from close range at the 36th minute. While both sides had chances to win the game, the match finished all square on Interim Manager, Neil McCann’s first game in the Highlands.

In the build up to this game, McCann made a handful of changes from the previous draw against Alloa Athletic. Scott Allardice, Daniel Mackay and Nikolay Todorov were rested, with Sean Welsh, Miles Storey and James Keatings coming in to start. Robbie Neilson’s Hearts arrived in the Highlands with the same starting team from the previous game.

And it was the away team that tested the waters first. Liam Boyce set up Aaron McEneff in space in front of the box and he managed to test Mark Ridgers with a rising side-footed effort on target. It came down the throat of the shot stopper, making it a relatively easy save at the first minute of the game.

The Caley Jags started off the game pressing constantly to make the visitors work hard for opportunities to score. McEneff tried to have a go from mid-distance only to see it deflected away to Kasteneer on the wing. The attacker shaped to shoot but found Gary Mackay-Steven instead on the far side of the pitch.

The former Celtic man failed to pick out a player at the back post with his cross, hitting it out of play. Up at the other end, Miles Storey shimmied on the ball to create a window on the left wing to shoot and hit a low shot that tested Gordon.

ICT started to get more into the game as Hearts were forced into errors, giving up the ball and stray setpieces. Wallace Duffy’s long cross from a dead ball situation was imaginatively flicked on by Storey into the box but Keatings couldn’t get on the end of it, with it being shielded out of danger by Craig Halkett.

But the combination would bare fruit a moment later, as James Keatings spotted the lively striker on his bike and lobbed the ball over the shoulder of Smith, with only the goalkeeper to beat.

Storey fought with the defender for the ball just as it arrived in the box and having won it, guided the ball on the bounce into the net past Craig Gordon for the opening goal.

The Caley Jags continued to threaten on the break afterwards. Shane Sutherland did a good job shielding a long ball up the right channel and worked it over to the opposite flank, eventually getting flicked on to Cameron Harper. The young fullback directed his cross to David Carson, who cushioned the ball and seemingly got brought down in the box as he tried to get a shot out, but the ref didn’t rule for a foul.

Up next, Shane Sutherland almost doubled the lead as he helped himself to seconds when testing Gordon from close range. From a freekick on the edge of the ICT half, the striker added a cute touch that forced Craig Gordon into a smart save and then tried to dink the rebound over the keeper while he was recovering. The former Scotland international managed to get up in time to grab the follow-up.

As the game grew, the visitors had better chances to grab the leveller. Defender Craig Halkett made a glancing contact with an inswinging corner at the 30th minute, only to see his header go wide of the post.

Barely a few minutes later, the visitors would get their goal. McEneff took control of a loose ball from a blocked direct freekick and chipped it to the back post. Halkett redirected it to the middle of the box towards Liam Boyce, allowing the former Ross Country striker to prod it in from around six yards. Despite protests from home players over whether it was onside, the goal stood.

On the first attack after the restart, ICT won a corner which was forced by a long throw by Wallace Duffy. Keatings’ whipped cross to the back post looked to be claimed by Gordon, but he misjudged it and the ball met the forehead of a flying Robbie Deas. He unfortunately couldn’t quite get over the cross and directed the header over the bar from a tight angle.

Another chance came as substitute Daniel Mackay latched onto a slack pass by Halkett in his own half. The academy player set up Harper for a first time cross into the middle, with James Keatings trying to spectacularly hook an ambitious half volley over the shoulder on target, but instead blazed it over.

Up at the other end of the pitch, Jamie Walker shrugged off continued pressure in the box to try to attempt to sneak in a shot at the near post, but Ridgers spread himself well to keep the shot out for a corner at the 63rd minute.

As the game went on, ICT continued to absorb pressure without the ball and had opportunities to attack Hearts on the counterattack. Daniel Mackay had time and space to drive at Hearts on the left hand side and after some encouragement, he cut in slightly and had a go from 35 yards. His shot took a knick off a Hearts player, blunting the venom of his attempt.

Moments later, Scott Allardice set free Sutherland down the right hand side on another break into Hearts’ territory. With a handful of home shirts busting a gut to join him, the attacker’s pass into the box was intercepted but immediately recycled by Allardice to Storey on the right channel. The striker picked out Mackay on the opposite side, whose attempt at finding Keatings in the middle went out of bounds.

As the game started to tick towards the end of normal time, Liam Boyce came close  to grabbing the winner. The striker headered a high ball towards goal that clipped the top of the crossbar and forced Ridgers into a quick save to prevent it from teetering over the goal line on the way back down.

With stoppage time added, the Jam Tarts’ Gnanduillet had his opportunity to make an impact from the bench, as the Frenchman latched on to a through ball from Walker on the right side of the six yard box, and tried to test Ridgers from an acute angle but dragged it just wide off target. Jamie Walker then failed to convert in the final chance of the game, being denied by the wrists of Mark Ridgers.